This guide is intended to assist in the migration from the recently retired ZYBO to the new and improved Zybo Z7. It will be useful for those who currently own or are familiar with the ZYBO and will need to port existing materials over to the new platform. If you are simply looking for complete documentation on the Zybo Z7, please refer to the Zybo Z7 Reference Manual.

What Happened to the ZYBO?

We realized that with several minor updates to the ZYBO's design, we could greatly improve its capabilities as a video platform while adding only little cost. We decided to move forward with these changes, also making some additional improvements along the way. Whenever possible, we left the design unchanged in order to help make the migration from the ZYBO to this new platform, the Zybo Z7, easy for our customers. Here is a summary of the changes that were made:

The figure below shows the ZYBO next to the two new Zybo Z7 product variants, the Zybo Z7-10 and the Zybo Z7-20.

The complete feature lists of these three products are arranged in the table below so that they can be easily compared.

The following must be considered when migrating from the ZYBO to the Zybo Z7:

The pin mappings of many components have changed. This is true even for some components that are present on both the Zybo Z7 and ZYBO. Any IP cores that are using board file interfaces will need to be re-targeted to the Zybo Z7. Also, any pin constraints found in XDC files will need to be replaced with updated pin constraints that take into account the new pin-out of the Zybo Z7. See section “Project Migration Tutorial” for instructions on how to do this with an existing ZYBO project.

For this reason, most pre-built bitstream files that target the ZYBO will not work on the Zybo Z7.

The input oscillator has changed from 50 MHz to 33.3333 MHz. Also, the Zybo Z7 uses different DDR memory. Both of these changes require the Zynq Processing System IP Core in Vivado to be reconfigured with different settings than were used on the ZYBO. See the section “Project Migration Tutorial” for an easy way to update an existing ZYBO block diagram to use the new Zybo Z7 settings.

For this reason, any binary files that target the ZYBO and make use of the processors (such as a BOOT.bin file) will not work on the Zybo Z7.

The VGA port was removed to make room for the dedicated HDMI ports and Pcam port. If a project was using VGA output, there are a couple options for porting it to the Zybo Z7.

As an additional improvement, you no longer need to disconnect any attached displays in order to power cycle the Zybo Z7. The display back powering issue present on the ZYBO has been fixed.

Designs that were using the ZYBO to simultaneously drive two displays with the HDMI port and VGA port will no longer be able to do so using the video ports found on the Zybo Z7 (there is only one output). Digilent recommends using the HDMI TX port and a Pmod VGA with the Zybo Z7 if your design requires dual displays. See the “HDMI Port Changes” section and “VGA Removed” section for more information.

The Pcam connector can be used to attach MIPI CSI-2 based camera sensor modules to the Zybo Z7. This interface supports much lower latency and higher bandwidth than the onboard USB 2.0 connector. If your design uses a USB 2.0 camera, modifying it to use the Pcam port instead will improve performance.

SDSoC and the reVISION libraries make it possible to do FPGA accelerated video processing using openCV functions in an all C/C++ development environment. Digilent will be enabling this design flow on the Zybo Z7-20 by providing a reVISION capable SDSoC platform for it in the future. Those using the ZYBO for video processing (or that are interested in doing so) should consider if migrating a project into SDSoC will enable improvements. For more information on reVISION, see Xilinx's reVISION Zone.

Those interested in using reVISION should migrate to the Zybo Z7-20. The Zybo Z7-10 does not have enough programmable logic resources to properly implement a reVISION platform.

Basic video processing applications designed on the ZYBO or Zybo Z7-10 will often use most of the available resources in the programmable logic. For this reason the Zybo Z7-20 is recommended for those interested in video processing.

The Zybo Z7 doubles the memory capacity of the ZYBO to 1 GB. Some designs may be able to benefit from this additional memory. This can often be useful in designs built on Embedded Linux (Petalinux).

Other improvements to the DDR will slightly increase available bandwidth and decrease power consumption.

The following procedure describes an easy method for porting an existing Vivado project from the ZYBO to the Zybo Z7. It was tested in Vivado 2017.2 and will likely work for other versions, though the steps and images may differ slightly. Note this guide expects previous experience with Vivado and Xilinx SDK.

Install the latest version of the Digilent Vivado board files

Download the latest version of the Digilent XDC repo 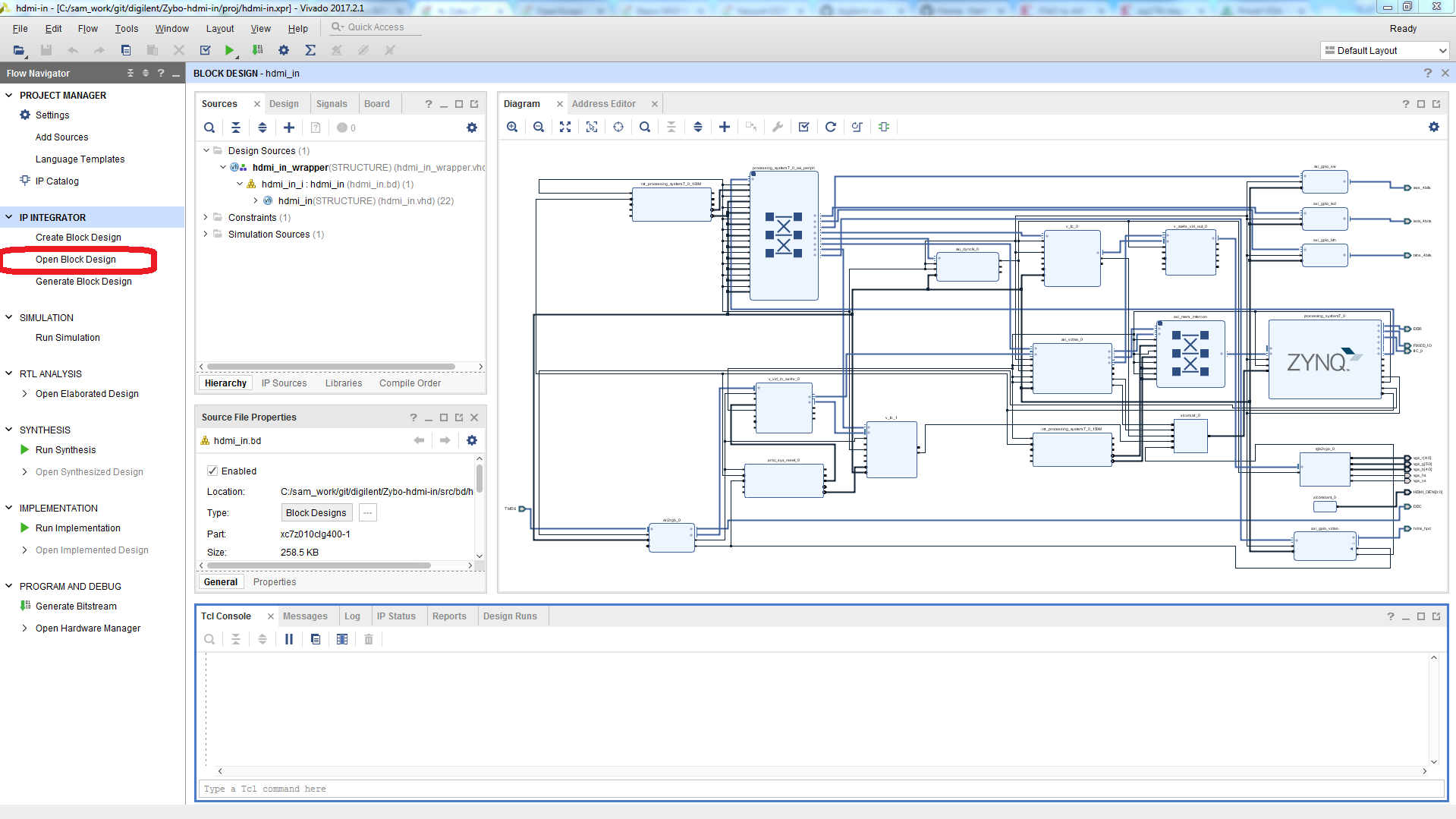 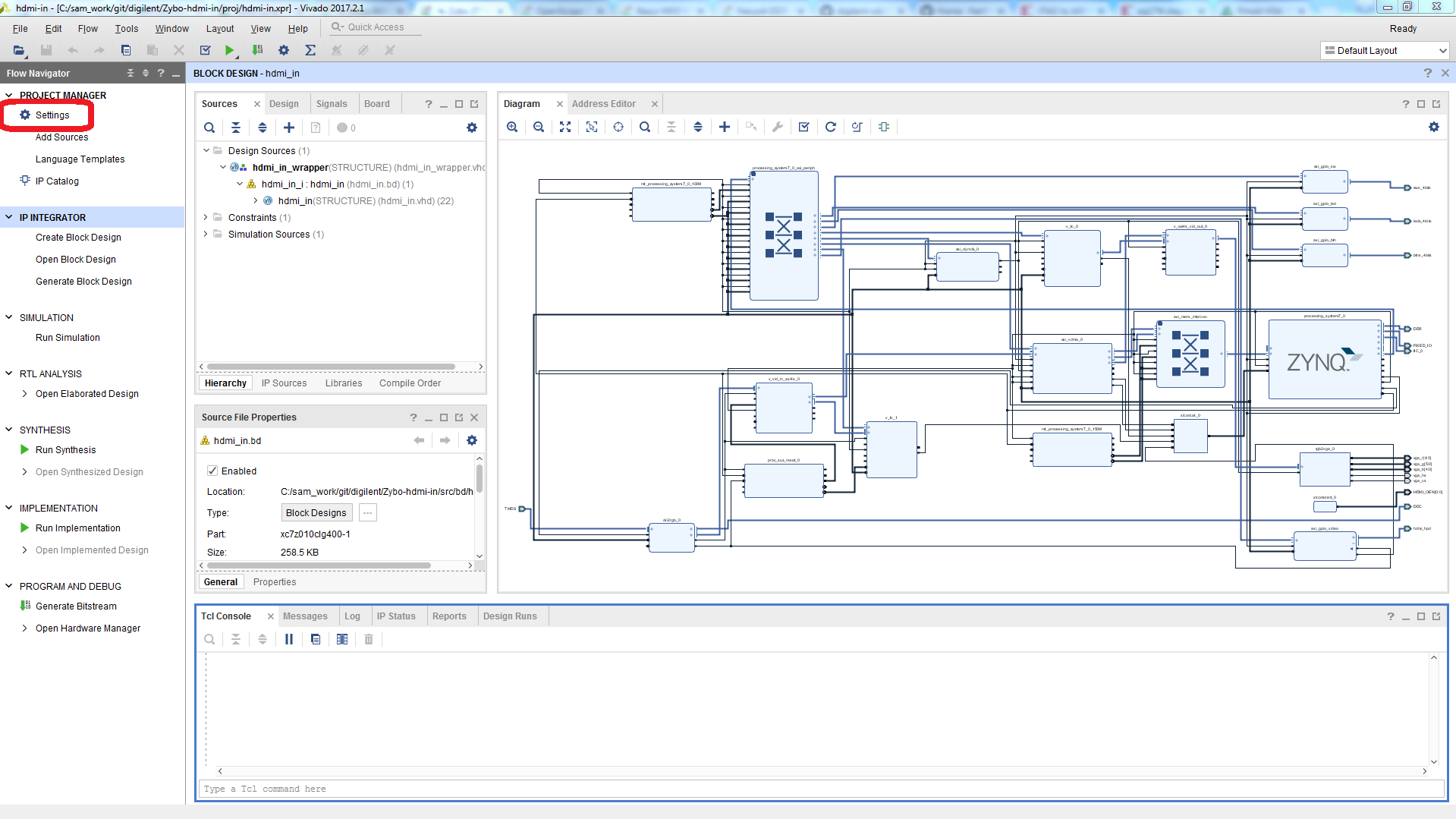 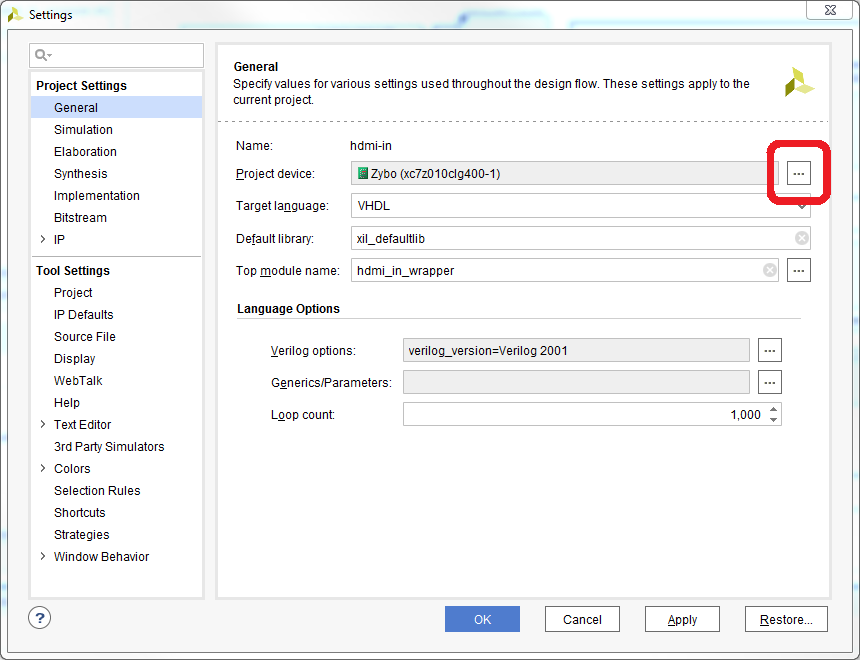 Select the Zybo Z7-10 or Zybo Z7-20 to retarget your project to the new platform. Click OK to apply the settings 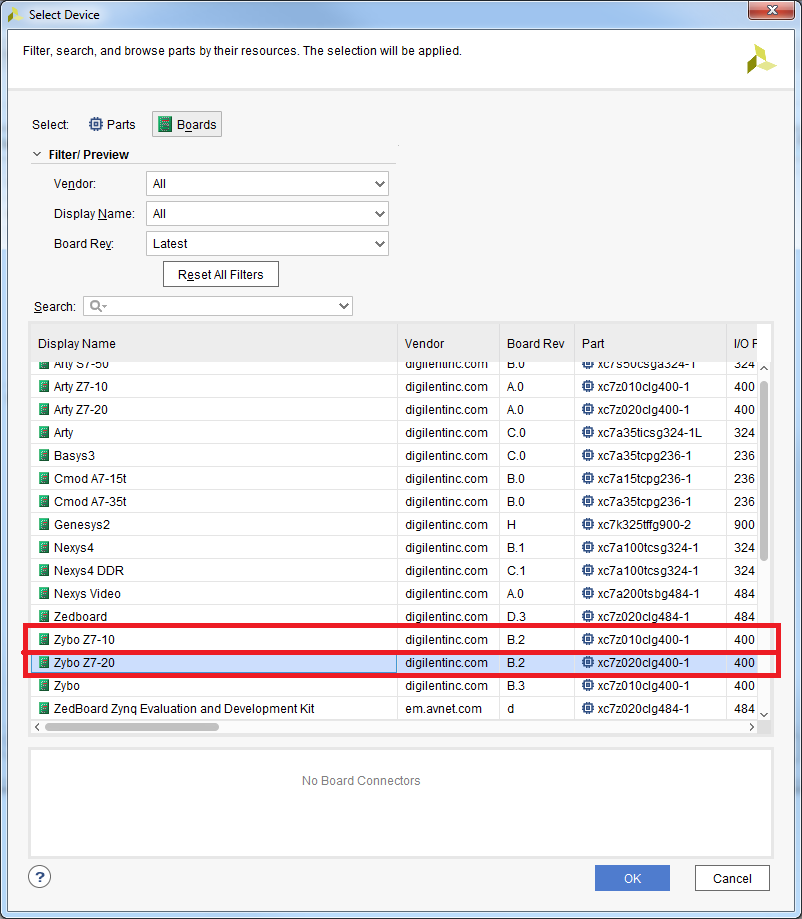 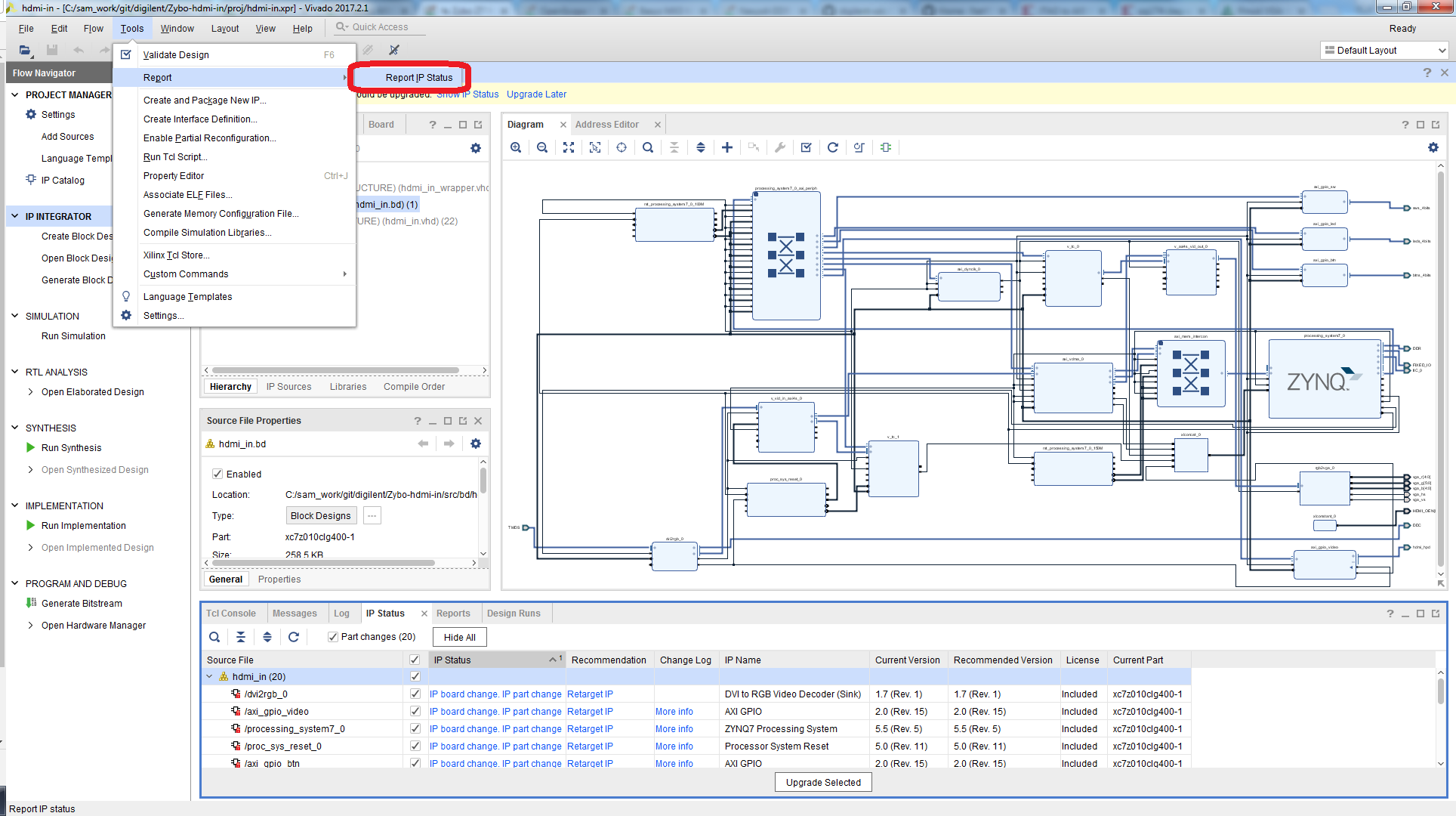 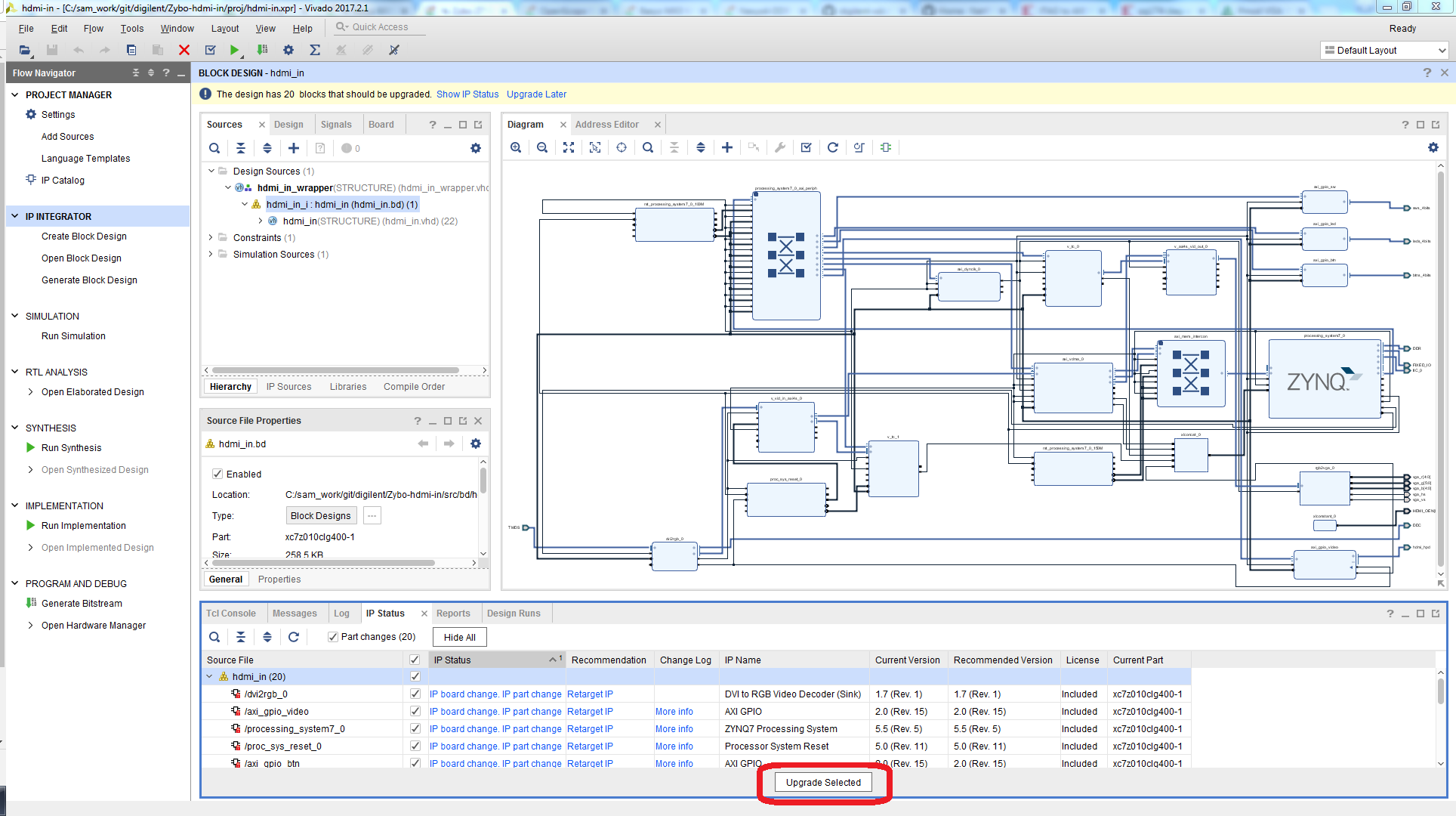 The Zynq PS IP core will not automatically take in the new settings, this must be done by triggering block automation for it. To do this, first delete the DDR and FIXED_IO ports from your design. 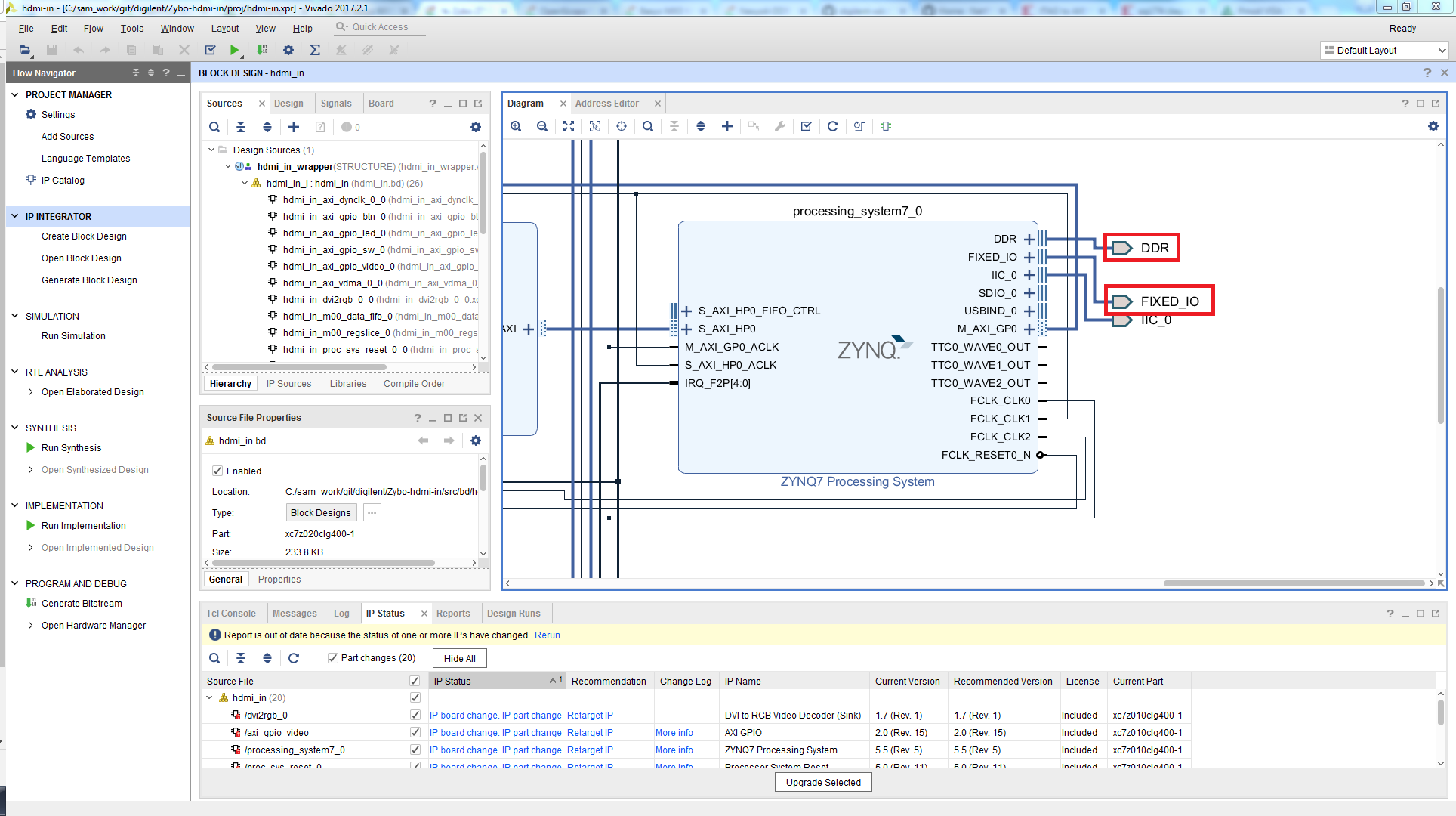 A green stripe should appear above the block diagram that says “Run Block Automation”. Click it. 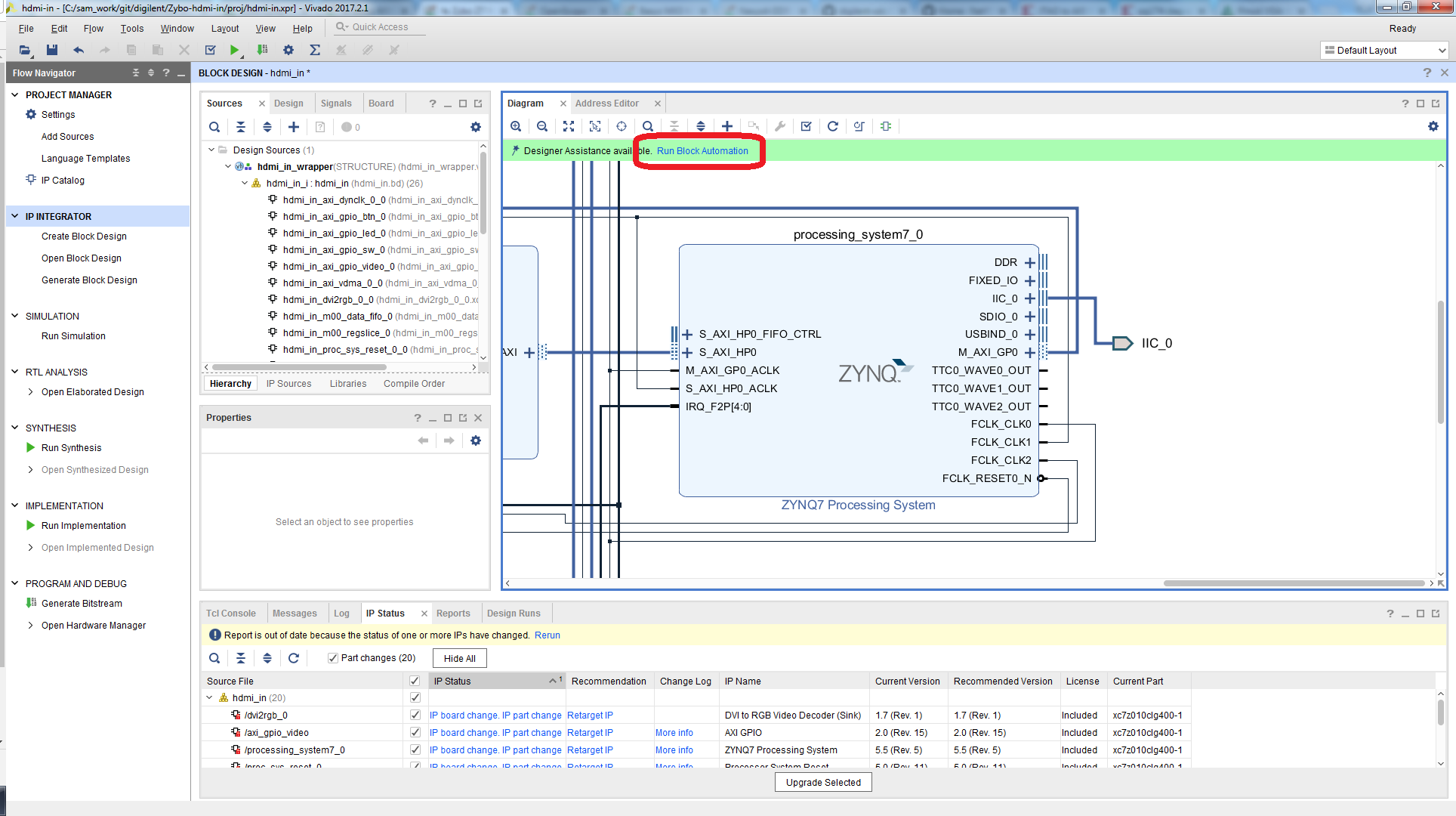 In the new wizard that comes up, accept the defaults and click OK. The Zynq PS should now be configured to properly work on the Zybo Z7.

The previous step may cause some settings you have manually set in the Zynq PS IP core to be overridden. If you think this has occurred, you can undo the last step by pressing Ctrl-Z, and then make note of any unwanted differences it triggered. Then redo the block automation, and manually make the desired changes again. Most options that are commonly changed in the Zynq PS IP core (such as FCLK, HP, GP, and interrupt settings) should not be affected by this. 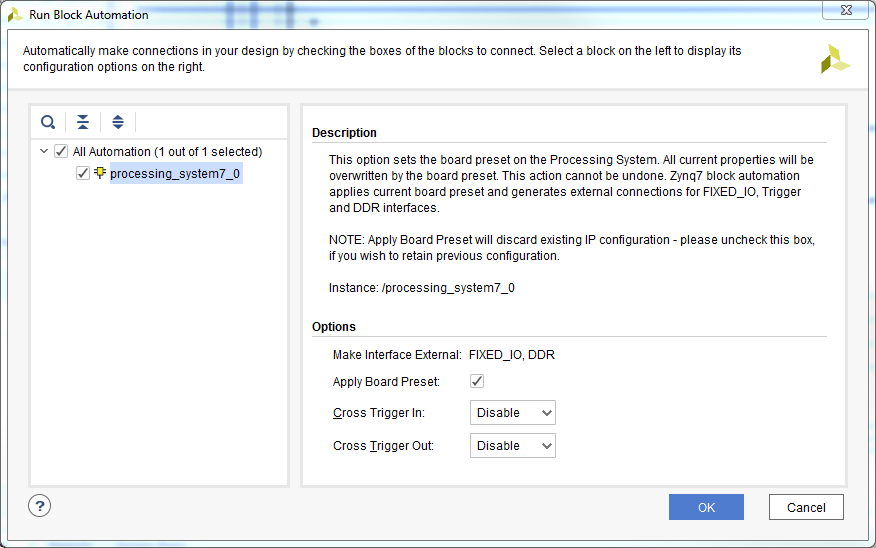 If your design specifies any pin constraints in XDC files, replace them with the equivalent pin constraints found in the Zybo-Z7-Master.xdc file of the digilent-xdc repo.

Implement any functional changes you may need to make to your design based on the situations pointed out in the “Migration Considerations” section.

Save the block diagram. Click Generate Bitstream to build the project. 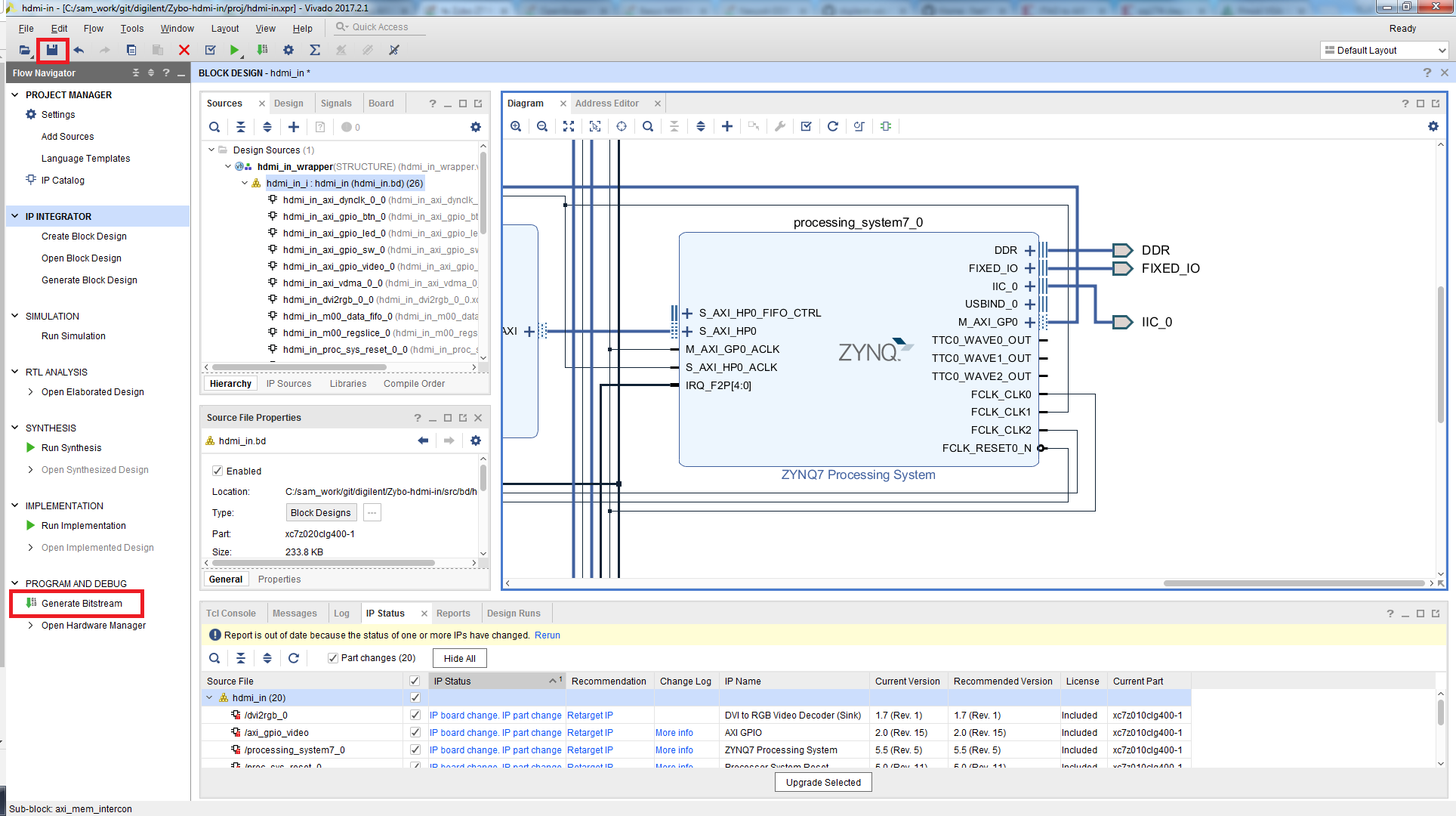 Export the project to Xilinx SDK to run and test your project on the Zybo Z7.