The DMC 60 is retired and no longer for sale in our store.

The DMC 60 is an electronic speed controller designed for driving brushed DC motors. It utilizes synchronous rectification to efficiently produce a variable output voltage that’s controlled by a PWM Input Signal. This makes the DMC 60 ideal for use in robotics applications, including FIRST Robotics Competition. 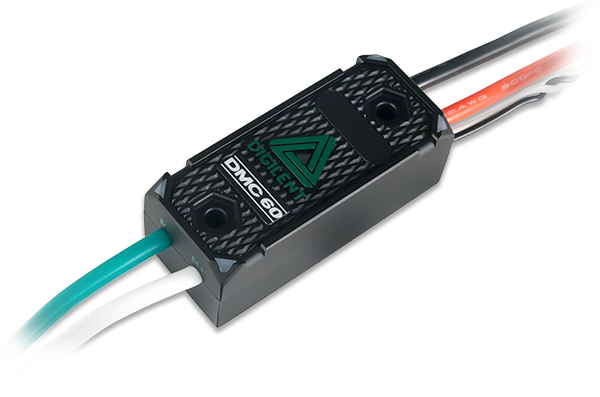 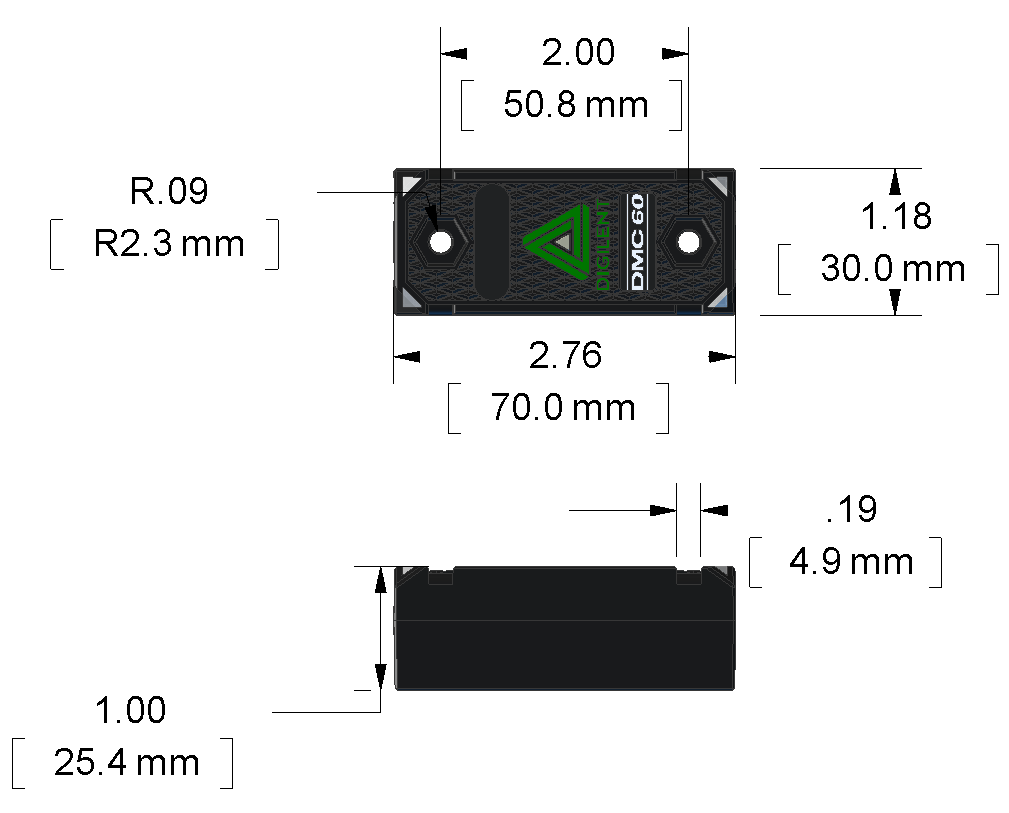 The DMC 60’s aluminum case is electrically isolated and may be mounted directly to a robot using zip-ties or #8-32 screws. The case may become hot after pro-longed use in high current applications. For optimum performance it is recommended that the DMC 60 be mounted in a location that allows airflow over the top of the case and around both sides of the case.

Connect the green wire (labeled M- on the housing) to the negative lead of the motor. Connect the white wire (labeled M+ on the housing) to the positive lead of the motor. The stall current associated with the motor may be very high. Therefore, it is recommended that these connections be made through crimped connectors or by soldering the leads directly together. If the DMC 60 output leads aren’t long enough to reach the motor, then they may be extended. It is recommended that 12 AWG (or thicker) stranded wire be used and that the wires be soldered directly together.

The DMC 60's PWM Input Cable features a 0.1“ pitch 3-pin female header that is compatible with most RC / PWM Servo Controllers, allowing the DMC60 to be readily wired directly to those devices. The table below describes the pinout for the PWM Input Cable.

The DMC 60 contains four RGB (Red, Green, and Blue) LEDs and one Brake / CAL LED. The four RGB LEDs are located in the corners and are used to indicate status during normal operation, as well as when a fault occurs. The Brake / CAL LED is located in the center of the triangle, which is located at the center of the housing, and is used to indicate the current Brake/Coast setting. When the center LED is off the device is operating in coast mode. When the center LED is illuminated the device is operating in brake mode. The Brake/Coast mode can be toggled by pressing down on the center of the triangle and then releasing the button. 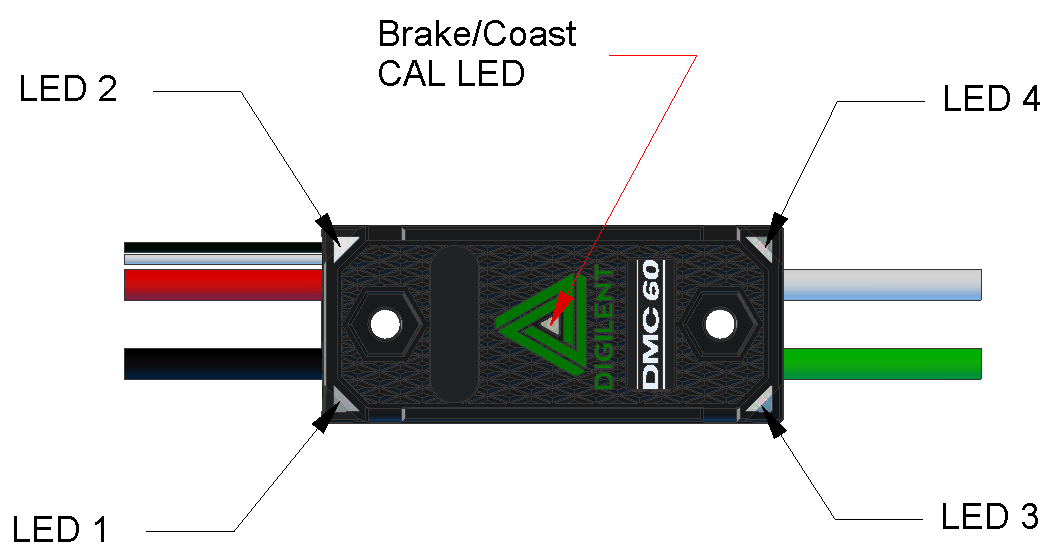 At power-on the RGB LEDs will display a progressive blue color, which continually gets brighter. This lasts for approximately five seconds. During this time the motor controller will not respond to an input signal, nor will the output drivers be enabled. After the initial power-on has completed the device will begin normal operation and what gets displayed on the RGB LEDs will be a function of the input signal being applied, as well as the current fault state. Assuming that no faults have occurred the RGB LEDs will function as follows:

The Brake / Coast setting is stored in non-volatile memory and is re-stored automatically after power cycles.

The DMC 60 accepts PWM input signals with a positive pulse width between 0.6 and 2.4 milliseconds. Due to variations in controllers it may be necessary to adjust, or calibrate, the pulse widths that correspond to the maximum forward and reverse duty cycles, as well as the neutral input.

Note: Calibration may only be performed while a servo input signal is present.

The DMC 60 continuously monitors the input voltage. If the input voltage falls below 5.75 Volts (+/- 2%) for 5 or more seconds, then the output duty cycle will be set to 0% and an under voltage fault will be signaled. The output will remain disabled until the fault is cleared (3 seconds), at which point it may be re-enabled if the under-voltage condition is no longer present.

When a fault condition is detected the output duty cycle is reduced to 0% and a fault is signaled. The output will remain disabled for 3 seconds. During this time the onboard LEDs (LED1, LED2, LED3, and LED4) are used to indicate the fault condition. The fault condition is indicated by toggling between the top (LED1 and LED2) and bottom (LED3 and LED4) LEDs being on and off. The top LEDs will be Red during them on state. The color of the bottom LEDs depends on which faults are presently active. The table below describes how the color of the bottom LEDs maps to the presently active faults.