Note: This document applies to REV B of the board. 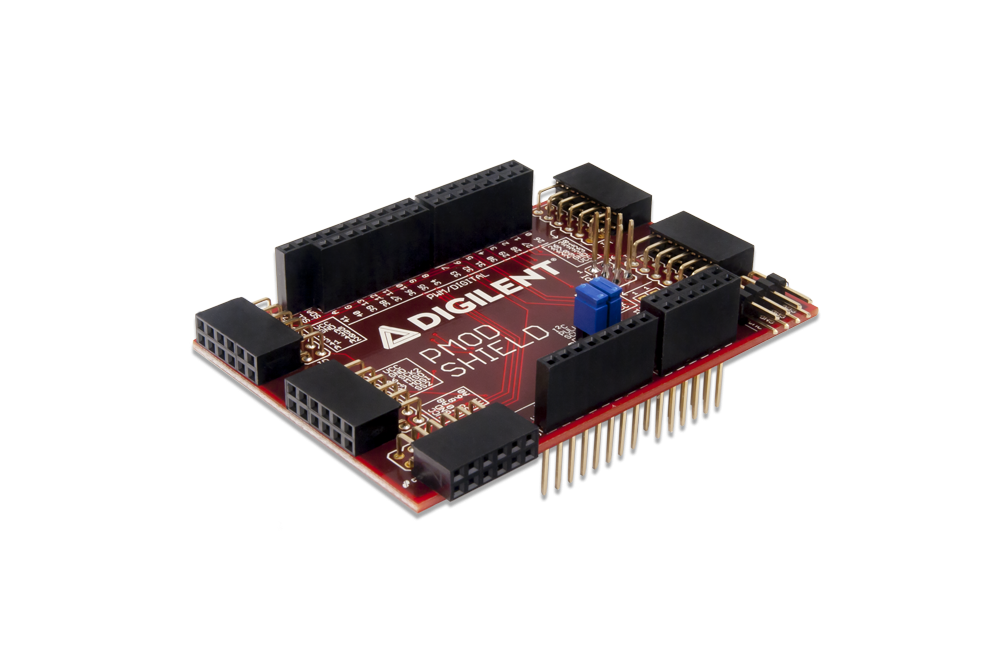 The Digilent Pmod Shield follows the Uno R3 header standard but adds an additional row of headers for use with the PIC32 microcontollers present on Digilent MCU boards. The Pmod Shield is compatible with Arduino base boards supporting the Uno R3 standard, but is primarily designed for use with Digilent host boards. When used in conjunction with Digilent boards, the Pmod Shield provides the necessary supporting hardware and connectors to easily add Pmods to your design.

The Pmod Shield has the following connectors:

J1 & J3: Digital Signal Pass-Through Connectors This connector provides most of the signals used by the host board to the Pmod Shield board. The remaining signals are passed through the Pmod Shield.

J2: I²C Daisy Chain Connector This is a 2×4 pin male connector that provides access to the I²C signals SDA and SCL as well as power from the 3.3 V power bus and ground. This can be used to extend the I²C bus off of the board and to power external I²C devices. Digilent has MTE cables and a selection of I²C peripheral modules that can be accessed using this connector. All Digilent I2C Pmods are designed to be daisy chained if desired.

J4: Analog Signal Pass-Through Connector This connector passes the analog input pins on the host through the Pmod Shield board.

J7: I²C Connector This connector provides access to the same SCL and SDA pins provided on J2 but through a female header.

JA-JE: Digilent Pmod Connectors These connectors provide access to the signals of the host in a form factor which readily allows Digilent Pmods to be connected. UART, SPI and GPIO protocols are supported via the Pmod connectors.

JP1 and JP2 These connectors have had the pins removed to enhance mechanical compatibility with a wider range of base boards, but are present to re-route analog inputs to I2C data and clock lines.

The Inter-Integrated Circuit (I²C) Interface provides a medium speed (100K or 400K bps) synchronous serial communications bus. The I²C interface provides master and slave operation using either 7-bit or 10-bit device addressing. Each device is given a unique address, and the protocol provides the ability to address packets to a specific device or to broadcast packets to all devices on the bus. Refer to the host board manufacturer's datasheet for detailed information on configuring and using the I²C interface.

The Pmod Shield is designed to provide access to both I²C interfaces present on the Digilent microcontroller boards. One of the I²C connectors is available on header J2 and the other connector is located on several other connectors on the Pmod Shield. J2 is a standard 2×4 pin header connector with 0.100” spaced pins. It provides access to the I²C signals, SCL and SDA, plus VCC3V3 and ground. The VCC3V3 can be used to power external I²C devices. SCL and SDA are also provided on header J7 as female pins.

The I²C bus uses open collector drivers to allow multiple devices to drive the bus signals. This means that pull-up resistors must be provided to supply the logic high state for the signals. Generally, only one set of pull-ups are used on the bus. Jumpers JP10 and JP11 can be used to disable the on-board pull-ups on I²C #1 if a different value is needed or some other device on the bus is providing the pull-ups or if I²C #1 isn’t being used and the pull-ups are interfering with the use of the pins. The on-board pull-ups are enabled by install shorting blocks on JP10 and JP11. Removing the shorting blocks disables the pull-ups.

These same signals can also be accessed on the top row (pins 1-4) of Pmod header JC. 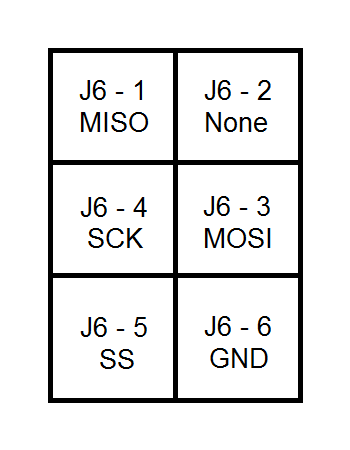