Less than 10 years ago, a single axis gyroscope would have cost about 15-20$. Now, you can get a 3-axis gyro, 3-axis accelerometer, 3-axis magnetometer AND a barometer all on a single module for less than 30$! That’s exactly what the Pmod NAV is, a 9-axis IMU plus barometer on a single 0.8” by 1” (2 cm by 2.5 cm) module that conveniently plugs right into any Pmod connector with an SPI interface.

The LPS25HB is a piezoresistive absolute pressure sensor that completes the Pmod NAV by adding the ability to gather barometric readings, turning the module into an altimeter in addition to a motion sensor. This IC features an embedded temperature sensor of its own for compensation, 24-bit data output, 260 to 1260 hPa absolute pressure range and low power consumption. For more detailed specs on the Pmod NAV, visit the reference manual. 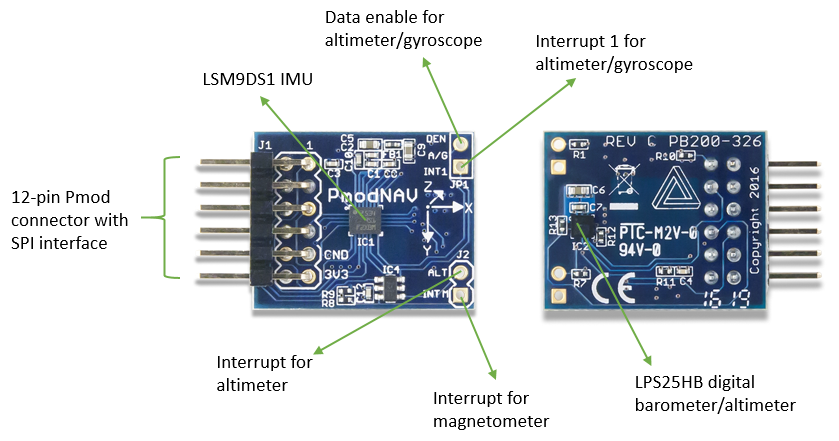 With the combination of five different types of sensors packed on this board, the Pmod NAV is ideal for a wide variety of popular applications including robotics, navigation, gaming, virtual reality, gesture recognition, or really anything that requires knowledge of position in space! This one module alone can provide all the sensory data necessary to keep your UAV in the air and knowing where it’s going. Or, combined with the low power consumption feature, the Pmod NAV can provide display/map orientation for handheld and portable devices. By combining gyroscopic and accelerometer data and using an easy to implement technique such as a complimentary filter, very accurate angular position data can be achieved.

Getting Started with the Pmod NAV

If you are an MCU user, we’ve written some example code to get you started quickly. Examples include some basic accelerometer, gyro, magnetometer and altimeter functions plus calibration functions. Data will print out in useful units. See the Pmod NAV resource center to download.

If using the Pmod NAV with a Digilent FPGA board, see our wiki page titled Using Pmod IP’s for instructions on how to get up and running smoothly with MicroBlaze designs.