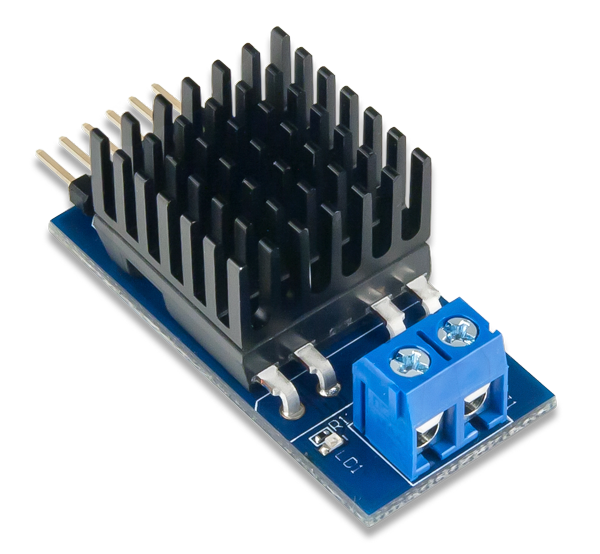 Announcing the addition of the Pmod SSR to the Pmod power family!

The Pmod SSR is a single-pole, normally open solid state power relay which allows you to control high-current DC loads from low voltage FPGA or microcontroller pins. By definition, a solid state relay has no moving parts, which affords it certain advantages over its mechanical relay (EMR) counterpart. Namely SSR’s last longer, have no contact bounce issues, have much faster switch on and switch off speeds, and can be switched at much lower voltage and current than most mechanical relays. This particular module uses a switch controlled by a single GPIO pin and is rated to block up to 48 Volts and switch up to 6 A(rms) continuous load current. Featuring the IXYS CPC1908, the Pmod SSR achieves fast switching speeds of 20 ms or less and has low on resistance of only 0.3 Ohms. Additional features include a 6-pin Pmod connector for plugging directly into any Pmod host port on a Digilent FPGA or MCU board, indicator LED for user feedback and screw terminals for secure connection to the load circuit.

The main component of a solid state relay is the opto-isolator, also called an optocoupler, which contains one (or more) infra-red light-emitting diode, or LED light source, and a photo sensitive device. Specifically, the CPC1908 employs optically coupled MOSFET technology, using the patented OptoMOS architecture, with a single highly efficient GaAlAs infrared LED.

When the switch is “OFF”, the optocoupler isolates the input from the output of the SSR. The infrared LED is connected to the SSR’s input and provides optical coupling through a gap to the adjacent photo sensitive MOSFET. When a current passes through the LED, it illuminates and its light is focused across the gap to the MOSFET, turning the SSR “ON”, as illustrated in the figure below from a National Instruments white paper.

Thus, switching the SSR ON and OFF is as easy as blinking an LED!

As mentioned above, the Pmod SSR is ideal for controlling high current DC loads from low voltage MCU or FPGA pins, and the module will work with any Pmod host port on a Digilent system board.

As the onboard CPC1908 is highly reliable and offers low drive power requirement, it is typically used in applications such as industrial motor control, robotics, medical equipment, instrumentation, meters as well as others. In summation, any application requiring low drive power, fast and reliable switching, peak current up to 25 A or continuous current up to 6 A(rms) would be well suited for the Pmod SSR.

Getting started with the Pmod SSR

If using the Pmod SSR with a Digilent FPGA board, see our wiki page titled Using Pmod IPs for instructions on how to use our Pmod GPIO IP core with MicroBlaze designs.