WaveForms. It’s the software suite that controls all of Digilent’s Test and Measurement devices including the popular Analog Discovery 2, the Analog Discovery Pro series boards, and the Digital Discovery. But what if WaveForms could control more than just those devices? What if it could also control a power supply? Or even one of Digilent’s SoC development boards?

What if these weren’t hypothetical ideas and instead a reality?

Digilent is proud to announce the latest release version: WaveForms 3.19.5 with support for the Discovery USB Programmable Power Supply (shop DPS3340 here) and the Eclypse Z7 using the Scope, AWG, and Digitizer Zmods, along with a whole suite of new features and bug fixes. Enterprising users can read the full change log on our reference site here, but we’ll highlight a few of the changes in this post.

Oscilloscope:
– Eye Pattern view. Rather than just using the previously available Persistence view, you can now get more precise measurements on the jitter, width of the eye, control over the clock signal threshold and more. – Multiple X/Y channels in the same plot for when you need to compare a signal against multiple reference points. 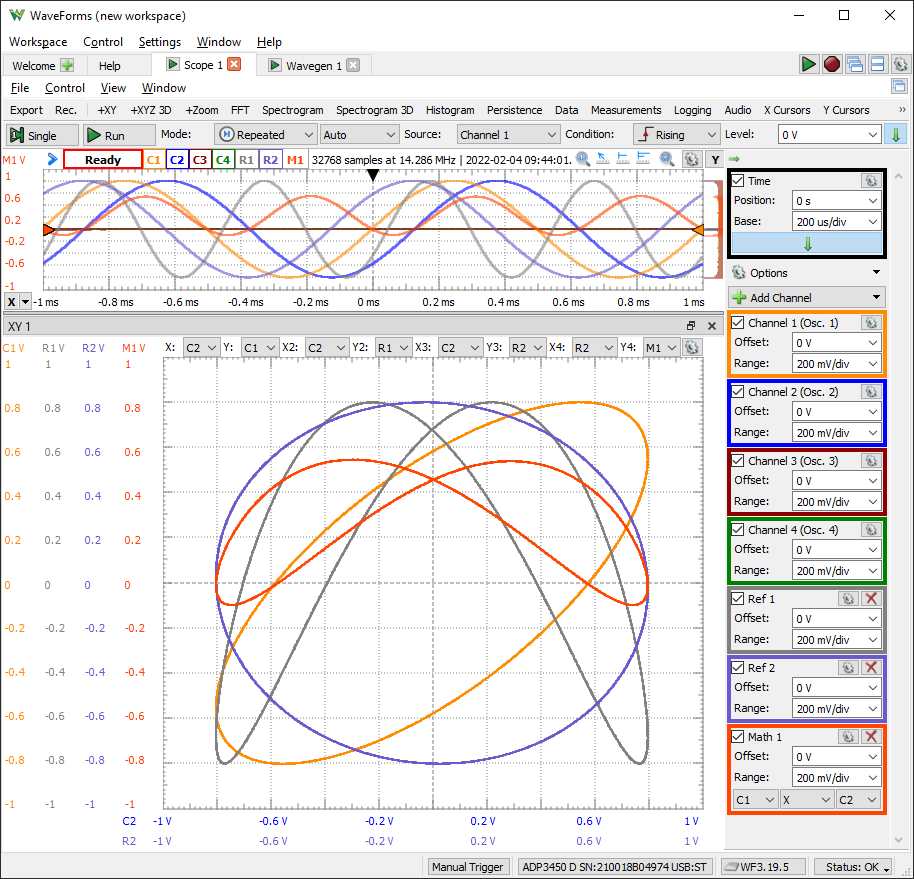 Waveform Generator:
– New amplitude options for users in the audio space including peak to peak, RMS, dBV, dBm, and dBu.

Logic Analyzer:
– JTAG and GPIB interpreters were added. Here’s a fun fact: while much of WaveForms’ development is done by Attila, new feature ideas that you develop can also be added in the official WaveForms build, as is the case for GPIB: https://forum.digilent.com/topic/21857-any-protocol-definition-for-gpib/#comment-66606.

Protocol:
– I2C Slave functionality and Script options for spy were added along with support for transmitting higher bit rates supported by CAN FD.

Application and Visuals:
– Grey theme option for users more conscientious of eye sensitivity than is offered by dark mode.
https://forum.digilent.com/topic/22453-help-with-gentler-dark-mode-in-waveforms/

– SDK dwf framework universal package for MacOS
– Automatic switching between 1 GS/s and 500 MS/s on the ADP5250 analog inputs based on the number of channels enabled instead of requiring a different board configuration.
– Ctrl/Shift modifiers in combination with the scroll wheel to fine adjust drop-down entry fields.

Power up your work environment with the latest version of the WaveForms software today!