If you’ve been around electronics for a while, you’ve probably noticed that components like resistors, capacitors, zener diodes, and inductors come in some odd values. Looking at the chart below, there seems to be no clear rationale behind the values, but there is a pattern. 47kΩ resistors and 22μF capacitors are everywhere, but not 40kΩ or 50kΩ resistors, or 20μF or 30μF capacitors. So what’s the deal? It all has to do with preferred numbers. 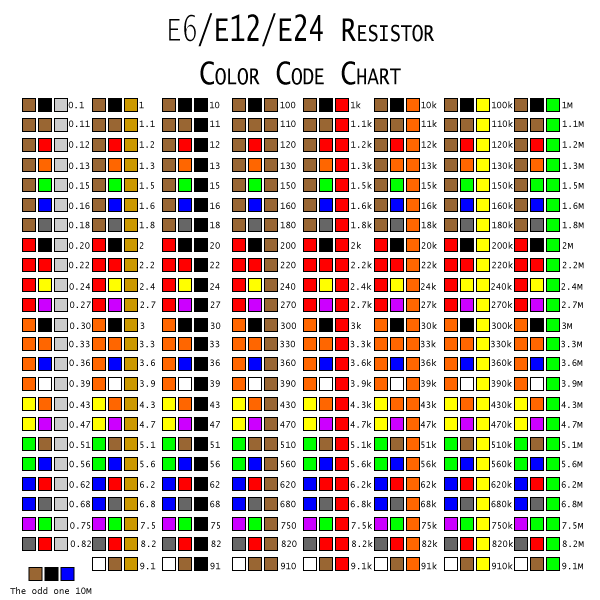 We have to go back a few years to 1877 France. The French military used balloons for various purposes and of various sizes, and they had to be anchored using cables. Over time, they ended up with 425 different sizes of mooring cables that had to be individually ordered and inventoried. Talk about a nightmare.

Enter Charles Renard. He was tasked with improving the balloons, but discovered this rat’s nest of cables in the inventory closet instead. He spent some time thinking about it and came up with a series of 17 cable sizes that would allow for every type of balloon to be properly moored. Each size of cable had a max/min rating that just overlapped it’s neighbor above and below, so every required value was covered by one or more cable. This system of numbers became known as the “Renard numbers” and was later included in the “preferred numbers” when the concept was expanded for other applications and became an international standard with ISO (International Organization for Standards) 3 in 1952.

Below is a simple graphical view of how the E12 values relate to one another. Along the bottom of the graph you will see the first 13 terms of an ideal geometric sequence as well. (The sequence is given by y=10^(i/b), where b is the value of the series (e.g. 12) and i is the term desired (e.g. the 8th term would yield 10^(8/12)=4.64).) Notice how closely the values are related.

While it is possible to have a 3.3kΩ resistor with 20% tolerance test out between 2.64kΩ and 3.96kΩ, I would be hesitant to use it. I want 3.3kΩ, so I tend to use resistors with a higher tolerance, usually 5%, so I can just reach in my bin and know that I’m reasonably close. Looking back at the table in the beginning, we see that there are values of 68 and 75 listed. If I’m looking for a value of 70 (or some multiple power of 10, like 700), what can I do to achieve it? I can certainly start testing every 68 valued resistor I can find (75 is just out of range of 5% tolerance), hoping to find one that is just right, but just because it says 5%, doesn’t mean it is. That is a maximum allowance, and my experience has been that the tolerances are much tighter than that. I could go up to an E96 (681 0r 715) or even E192 (698!), but resistors with that level of %-error tolerance are not common and cost more. I just want something simple that I already have in my bin! The answer is actually quite simple. Just add a 33 and a 47 and call it good. You get your 70 +/- whatever tolerance you want since 33 and 47 are preferred numbers in every E-series. The point is that any value can be made for any circuit requirement simply by adding components together. When you throw in the rules for calculating components in series and parallel, the combinations are endless.

5 Comments on “Why Do Electronic Components Have Such Odd Values?”