This is part 2 in my series comparing WaveForms to its LabVIEW counterpart “LabForms”. Part one focused on the Waveform Generator, click here to check it out!

An oscilloscope (or “scope”) allows you to view a signal’s waveform, typically in a two-dimensional graph where one or more electrical signals (on the vertical axis) are plotted as a function of time or of some other voltage (on the horizontal axis). Most of the time, oscilloscopes are used to show events that repeat with either no change or events that change slowly. Accessing the oscilloscope is easy in both WaveForms and LabForms, in both versions simply navigate to the “Scope” tab from the home screen, shown below.

The user interfaces are quite similar, this can be seen from the picture below. LabForms contains many of the same major functions but doesn’t have all of the options as WaveForms. For example, WaveForms allows you to create a math channel which allows you to perform a variety of mathematical calculations on the input signal of the oscilloscope. This can also be done in LabForms but not from the user interface. Instead, a user would have to edit the block diagram which might be difficult for users unfamiliar with LabVIEW. 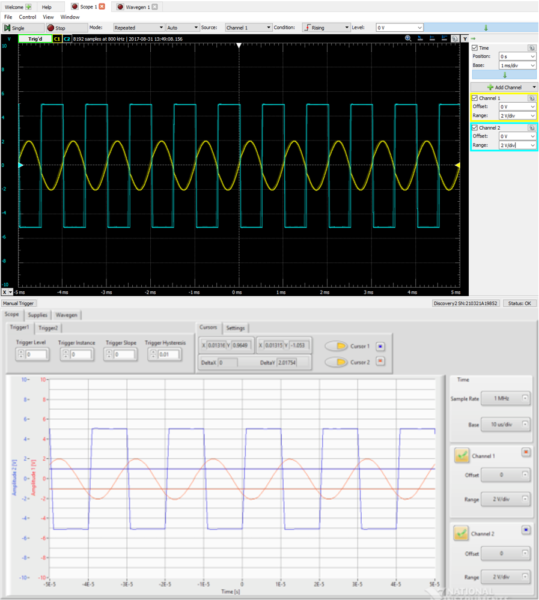 There are also many differences between the two versions. WaveForms’ includes a large assortment of built in features including reference channels, input coupling, a custom mode for filtering and many others. LabForms has only the basic features built in, but because it is built in LabVIEW users have access to a huge amount of tools to help create a customized waveforms. Below you can see the basic LabVIEW VI’s for viewing signals from the oscilloscope.

Another benefit of LabForms is the ability to combined with the Analog Discovery 2 with other LabVIEW compatible hardware. For example, many people prefer using physical knobs to configure a scope rather than using a mouse. That’s why I made used LINX to allow me to control the LabForms oscilloscope with physical knobs (Pmod ENC’s). With these knobs you will be able to control the sample rate, base, range, and offset of both of your scopes. Currently, this project can only be used with LabVIEW 2014. 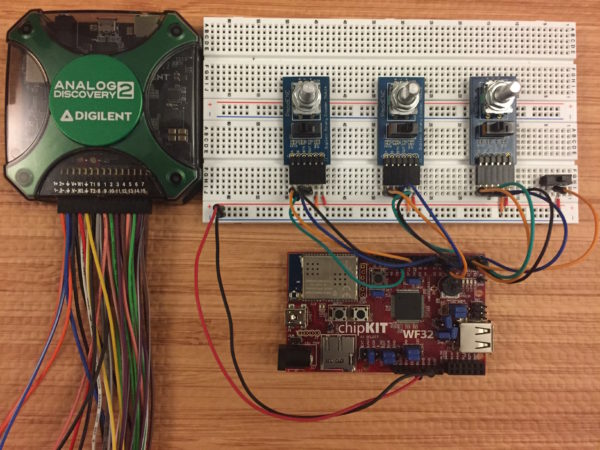 Thank you for reading this blog post; if you want to learn more, please check out our Instructable “Analog Discovery 2 USB Oscilloscope + LabVIEW(2016 update)“.  If you are interested in testing LabForms out for yourself but don’t have the right supplies, you can purchase LabVIEW 2014 home bundle here, and if you are a student the Analog Discovery 2 has an academic discount available. Please comment below with any questions or comments you may have.

One Comment on “WaveForms vs LabForms Part 2: The Oscilloscope”