The USB104 A7 is a new addition to the Digilent ecosystem. At first glance it may seem similar to some of our existing FPGA development boards, but the USB104 A7 is in a class all its own. What’s so special about it? Well, it’s the first Digilent board to adhere to an industry-standard form factor, specifically PC/104, but that’s not even the best part.

How is This Different From PC/104?

The name, USB104 A7, alludes to what is different about this board versus other PC/104 devices. We kept the form factor from the PC/104 set of standards: the board is 3.775” x 3.550” (95.89 mm x 90.17 mm) and PC/104 standard mounting holes are at each corner of the board with the standard 0.6” standoffs included. This enables integration of the USB104 A7 into any PC/104 stackable PC. However, rather than creating our board around a parallel bus that limits versatility and compatibility with other systems, we chose to use one of the most widely adopted buses within both the commercial and industrial embedded markets: USB.

As application demands continue to advance, vendors have released an ever-increasing variety of embedded PCs and industrial I/O in myriad enclosure types, which presents a challenge for embedded systems that are built to an existing standard and parallel bus. USB, with its already widespread adoption, simplifies this considerably. On the USB104 A7, an onboard USB hub and controller conveniently interfaces the FPGA with JTAG, UART, and a parallel data interface (DPTI) through a single connection.

What about I/O on the board? This is where the USB104 A7 really shines. In addition to 3 Pmod ports, we included a SYZYGY-compatible Zmod port. SYZYGY is a new standard by Opal Kelly that provides more performance and throughput than Pmod, but remains more cost-effective and compact than FMC.

Having a SYZYGY port on the USB104 A7 provides access to high-speed I/O with Digilent’s new Zmods, such as the Zmod ADC 1410 and Zmod DAC 1411. Never before has high-speed I/O in an embedded computing system been so simple.

Want to learn more? Why not try it out?! Through February, Digilent is offering $100 off when you purchase a USB104 A7 with any Zmod. 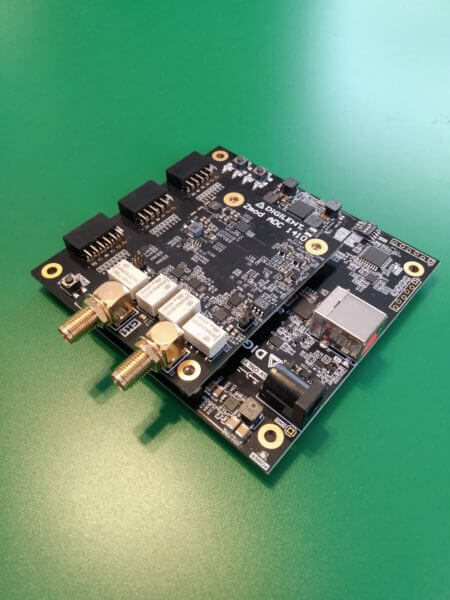 3 Comments on “The USB104 A7: A New, High-Performance Twist on an Old Favorite”