It Starts with the Analog Discovery

Since our founding over two decades ago, Digilent has used expertise in low-cost FPGA tools from industry leader Xilinx, in combination with parts and peripherals of leading technology to provide accessible FPGA development platforms, bridging the gap between industry and individuals. Starting as an excellent showcase of FPGA technology, products like the Analog Discovery quickly took hold in academia and spread into industry by taking advantage of the flexibility of reprogrammable hardware to the test and measurement world. 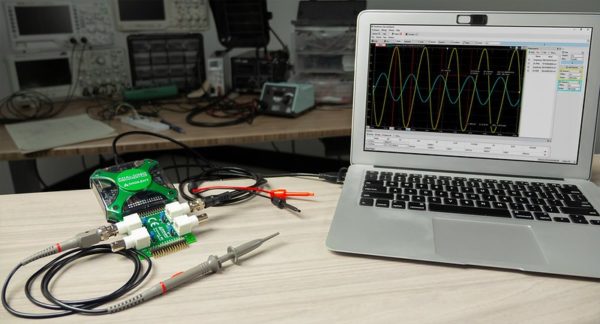 By using FPGA technology at the core, the Analog Discovery can operate mixed signal and mixed domain analysis while providing a wide range of benchtop devices in a portable PC-connected device. Over the years of refining the software and adding new instruments as our industry wide customers needed them, the Analog Discovery quickly became a toolbox staple with its ability to apply to a broad range of applications and specifications targeted as such, or as I like to say, it’s “good enough for most things”.

Being built on reprogrammable hardware connected to a PC we’ve been able to add an immense amount of functionality and flexibility to the device, and adapted the design into new tools such as the Digital Discovery, but as our world becomes increasingly more demanding on engineers and increasingly more remote, we took all of the feedback we received, and the examples from our customers incredible ingenuity (like chaining multiple Analog Discoveries together with the dedicated trigger channels) and have put them into our new products, the Analog Discovery Pro line. 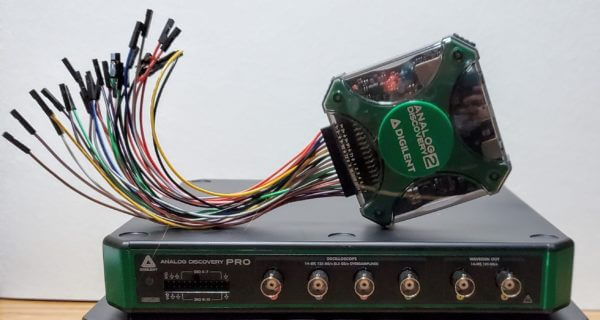 To create the first in this new level of products we took the core feedback we’ve been receiving and put it into one device: more customizability, more oscilloscope channels, a faster sampling rate, larger buffer size, integrated BNCs, networking, and the addition of features typically found on benchtop oscilloscopes. The trick with creating this new product was keeping the core of what makes an Analog Discovery – mixed signal functionality, mixed domain analysis, an entire benchtop of instruments in one device, and the high-resolution ADCs and DACs.

What Makes an Analog Discovery Pro

Using our expertise in Zynq-based boards and designs, we took 14-bit 125 MS/s ADCs and DACs and created the first model of the Analog Discovery Pro line, the ADP3450. In this device, we took all that is beloved about the Analog Discovery and added oversampling to reach up to 0.5 GS/s sampling rate, four oscilloscope channels, benchtop scope features such as AD/DC coupling and hardware bandwidth filters, a MS buffer size, and a terminal-based Linux operating system. The ADP3450 features two unique modalities: ‘Linux Mode’ provides the option to write custom tests with advanced triggering, and ‘Standard Mode’ keeps the stability and ease of use of a USB instrument. Coming along with the upgrade to a Zynq-based device is a significant size increase in the FPGA itself, leaving the potential for upgrades only limited by imagination, and of course, the number of logic gates.

I’m looking forward to seeing all the amazing applications and customized test systems that our customers come up with using this new generation of devices (and of course, who can combine the most WaveForms devices to create the ultimate stacked test device).

3 Comments on “The Analog Discovery Pro: Why Did We Make It?”