Pmod Monthly is our YouTube hosted monthly video series that features cool projects using Digilent peripheral modules, or Pmods. Each month we offer the featured Pmods at a 30% discount for the duration of that month to encourage people to get their hands dirty and give these projects a try. And yes! The discount still applies on top of the Pmod Summer Sale!

Our featured project for the month of June is…

THE CLAWWWW…game. Which is equally ominous, as anyone would know who’s ever tried their hand at the claw (see what I did there?).

The Claw Game is our spin on the classic arcade version, using an FPGA board and series of Pmods. Kaitlyn Franz has been creating this project over the course of the past couple months, and it has been through many trials and tribulations. For example, arriving at the ECEDHA conference this past March in pieces just hours before it was scheduled to make its debut as the centerpiece of the Digilent booth. Kaitlyn recounts this escapade without the slightest hint of bitterness in a previous blog post. But the blood, sweat and tears (quite literally) have lead us to present to you the most advanced version of the Claw Game yet. Worth it!

This project uses the Basys 3 FPGA entry-level dev board as the brain, the PmodCON3 and PmodSTEP as the servo and stepper motor controllers respectively, and the PmodJSTK, a two-axis joystick, as the user input mechanism for positioning the claw on its x-y plane. Kaitlyn has written a series of Instructables, which can be seen in the below image, detailing everything you need to know to create your own version of the game. The topics range from designing the structure (for which we’ve provided all dxf, PNG and STL files) to controlling a stepper motor with an FPGA and debugging using the Analog Discovery 2. This should be everything you need to create your own customized version!

In order to purchase these Pmods at this even further discounted price, you simply need to watch our Claw Game video that will be released on June 1st to discover the promo code. Once you have the code, simply enter it in during checkout from our store to receive an additional 30% off of the PmodCON3 servo motor connector, PmodSTEP stepper motor controller and/or PmodJSTK two-axis joystick. The discount will work for each of these products separately or together.

Spoiler! In mid-June we will be releasing a newer version of our joystick module, the PmodJSTK2, which will be a drop in replacement for the PmodJSTK. The promo code will work for either of these products. Stay tuned for more information on the PmodJSTK2! 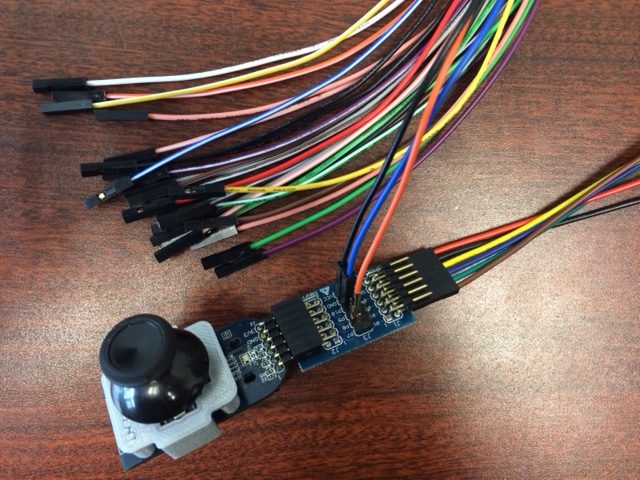 We hope you enjoy our version of the classic Claw Game, and make sure to watch the video to see it in action! If you create your own version please let us know in the comments below. We might even include it on our Wiki as a community project!