The Pmod MIC3 is a useful tool for those wanting external control over their circuit. For example, it can be used to program a light that turns off with a simple hand clap or speech commands.

The MIC3 uses what is called a MEMS-type microphone. MEMS stands for Micro Electronic Mechanical Systems – and in this case, its basically a really small capacitor. When something makes noise, that sound is fed into a sort of pressure sensor in the MEMS transducer. The sound pushes the sensor down, is released, and the sensor moves back.

The transducer is hooked to an analog to digital converter. It converts the movement of the sensor to a digital signal and thus can be read by many more platforms than if it was strictly an analog signal. 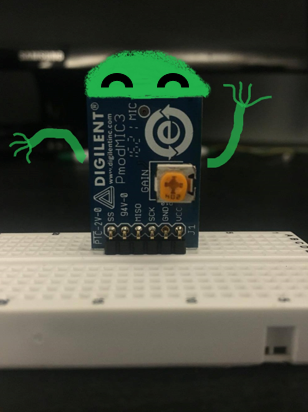 To explore these capabilities, I built a clap on/clap off circuit using the Pmod MIC3 and the Raspberry Pi 2. You can check out my full Instructable here!

For my project I used the hardware below:

I also used LabVIEW 2014 to target the Raspberry Pi 2 using LINX 3.0. I wired up my circuit with a single LED for demonstration purposes. 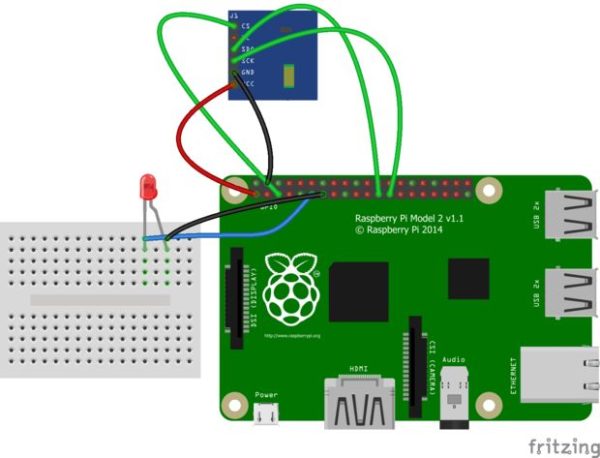 Once that was complete, I finished the code in LabVIEW. The Pmod MIC3 converts sound into voltage. That voltage is read out on the front panel and the LED turns on when the Pmod hears a clap.

The set of controls on the front diagram are the important part. The D/O Channel is what pin you have the LED plugged into and CS Channel is the Pmod CS pin number. The delay is how long the Pmod waits until it’s ready to listen again. Our threshold value is how high of a voltage you want the Pmod to recognize as a clap.

The Pmod MIC3 also has adjustable gain.  To put it simply, gain is how much audio the microphone takes in. It can be considered a type of volume control (however volume almost always refers to output sound), while gain controls input sound.

I was able to program the MIC3 in LabVIEW 2014 because of our handy-dandy LINX 3.0 add-on and there are even already pre-loaded MIC3 VI’s in the LINX LabVIEW library.

By the end of my project, I had a better understanding of how best to utilize the Pmod MIC3, as well as a nifty way to turn my lights off without having to walk across the room. And like I mentioned at the beginning, the MIC3 can be used for a great deal of projects. Check out our website to find the Pmod MIC3 and make sure to let us know what you use Pmods to build!