This project was designed as an extension of my Animatronic Tentacle Project, since it seemed a natural second step once you have built a tentacle arm to send it flying through the air at unsuspecting passerby.

The project itself is comprised of two main parts, the tentacle and the launchpad. The tentacle itself is purely mechanical, while the launchpad makes use of a mousetrap, ultrasonic rangefinder, and chipKIT uC32 to detect motion and within a few seconds, fire at aforementioned motion.

In the first iteration of this project, I was determined to launch the full-sized tentacle. 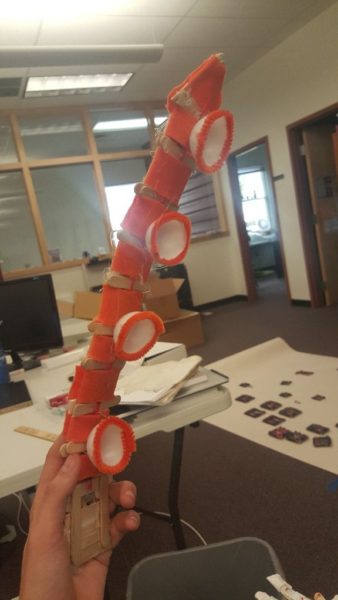 Unfortunately I soon discovered that the mousetrap I was using was not quite powerful enough to satisfactorily launch the full sized tentacle… so I ended up using smaller zip-ties to make a mini version!

Once you have your tentacle, it is time to start building the launchpad. The launchpad can also be used as a basic desktop catapult if a disembodied sea creature arm is not your projectile of choice. The basic assembly includes first attaching a V8 Juice can to the interior of a cardboard roll to make a strong and heavy base. Then hot glue a zUNO clip to the side of the cylinder you want to be the “front”. Clip in the chipKIT uC32, then take the mousetrap and hot glue another zUNO clip onto the back, about in the middle (of the back). Hot glue the mousetrap to the top of the base keeping in mind which direction it will fire.

For full instructions and the code for building the launchpad, check out my Instructable!

To fire, simply load the projectile and pull the mousetrap bar back. However, instead of placing the metal bar directly across (as you would if you were using it to catch a mouse) pull it over the corner and off the the side so it holds the trap taut. Then loop the smaller zip-tie around the arm of the servo, making sure it is holding the zip-ties (and subsequently the bar) down.

Once the trap is set, simply hang back to watch and wait for the reactions of your unsuspecting  coworkers. Check out the video below to see this project in action at the Digilent office!