In a recent blog post by Adam Taylor, he examines how to approach using Pmods if there is not a driver available. His solution is to use the Pmod bridge in the Zynq SoC’s PL (programmable logic) to correctly map Pmod ports on a development board and to create a Zynq PS (processing system) driver.

For his example, he used a SPI interface on the top row.  Then he selected the actual SPI communication channel.

As we are using the Zynq SoC, we have two options. The first would be to use an AXI SPI IP block within the PL and connected to the bridge. The second approach—and the one I am going to use—is to connect the bridge to the Zynq PS’ SPI using EMIO. This choice provides us with the ability to wire the pins from the PS SPI ports to the bridge inputs directly

To do this, he mapped the pins for this example, his diagram for the Pmod DA4 is shown below. 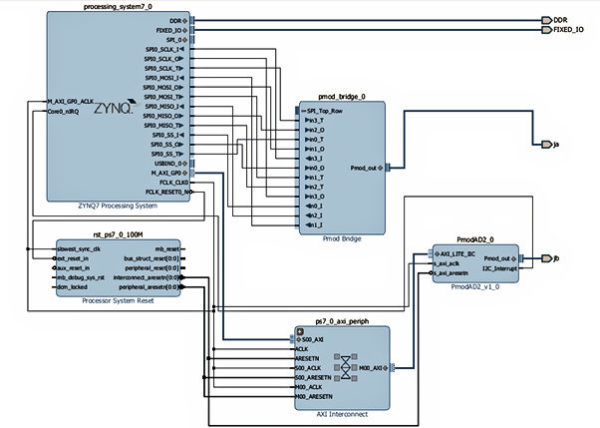 He uses the SPI drivers created by the BSP to drive the DA4, and to interact with his device. Then he drove a simple ramp output with the Analog Discovery monitoring the DAC output. One this was working as expected, he connected the DA4 and the AD2 together so that the Zynq SoC could receive the signal:

If you are interested in this project or learning more about Pmod drivers, please check out the original post and/or his git hub repository.