Now, if you are like me and had to read the above sentence 2-3 times to discern what on earth is going on (and perhaps had to google one or more of the words), this is the introduction for you. You see, while LabVIEW is often marketed to scientists and engineers (due to its low cost and relatively accessible learning curve), it can also serve as an invaluable tool for the common Maker.

Whether you are using it for personal projects or to give your kid the upper hand at the annual science fair, it hosts such a wealth of applications (specifically in the research and measurement fields), so that even if it’s not your medium of choice, it is good to become at least casually acquainted with.

When I first began researching LabVIEW, my expectations (born from a cursory understanding) were basically that I would be able to use the software to interface with hardware, and that because it was offered in a graphical format, it would have much shallower learning curve than straight up linear-style code. I would say that after a good few hours spent with the software and the tutorials, I felt pretty comfortable that this was fairly accurate first impression.

If C and C++ are textbooks, LabVIEW felt like the cliff-notes picture book version. This, in my opinion, was fabulous. Not only is it more appealing to visual learners, but for rapid prototyping I sincerely appreciate not having to take the time to build elaborate menus and such. It literally felt like I was using the basic building blocks of programming, and I felt relatively comfortable with and encouraged by the simplicity of the environment itself.

However as a learner, I struggled somewhat with lack of focus. Coming in without a specific project goal in mind, I was prone to distraction when dredging through some of the tutorials. LabVIEW felt a little intimidating but powerful, and I was very excited to see what can be done once I got my figurative sea legs.

LabVIEW is often billed as an incredibly easy to learn software which, while at first a draw, when I couldn’t figure stuff out made me question everything about myself as an engineer. 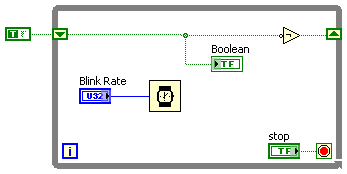 Eventually, after some hard work and personal pep talks I was able to get a simple blink program to run!