As you may know, we (Digilent) recently retired one of our old MCU trainer boards, the chipKIT Pro MX4. We know how tough it can be to update curriculum, and that’s why we’ve created a Hardware Migration Guide to assist instructors in migrating over to our recommended replacement, the Basys MX3.

The Basys MX3 is now our number one recommended MCU trainer board for teaching embedded systems and other microcontroller related courses. Basically, with a few minor exceptions, the Basys MX3 can do all that the chipKIT Pro MX4 could do plus much more. Here’s a high level overview of the major similarities and differences.

The chipKIT Pro MX4 was designed around the PIC32MX460 while the Basys MX3 uses the PIC32MX370, both 32-bit processors from Microchip. These two processors are considered by Microchip to be in the same family, with the primary difference being beefed up memory on the MX370, including the addition of 12 KB of boot flash. There are also three additional UART interfaces on the MX370 but the impact of this on the user has everything to do with how many I/O pins have been made available on the board. We’ll get to that below. For more details on how the processors compare, see the full Migration Guide.

In this category, the Basys MX3 excels. It was our goal to put an exhaustive set of peripherals needed to teach most intro level embedded system courses directly on the board, rather than requiring users to purchase additional add-on hardware. The differences are best explained visually… So please check out the diagram below! 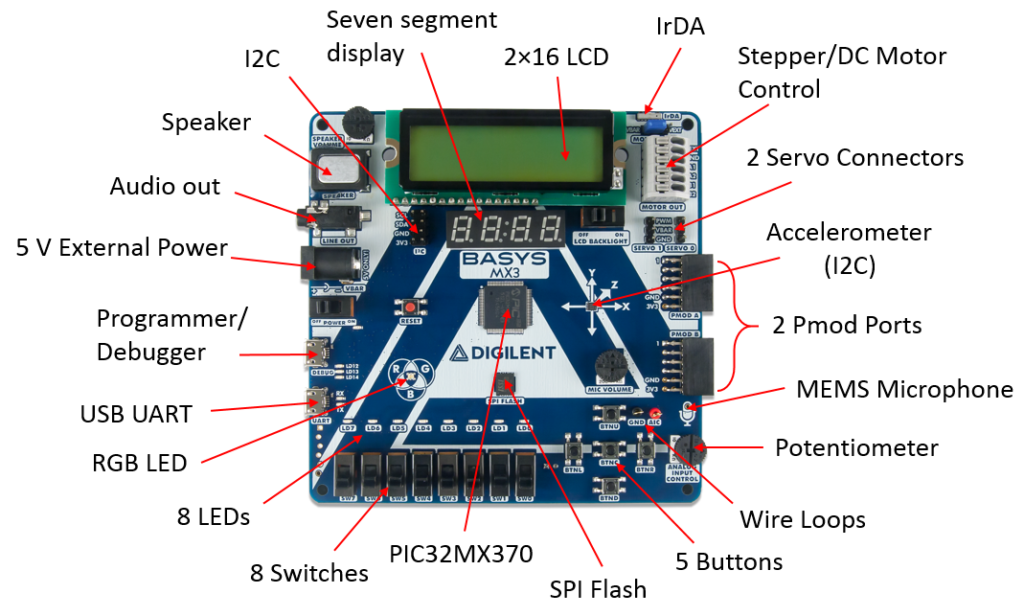 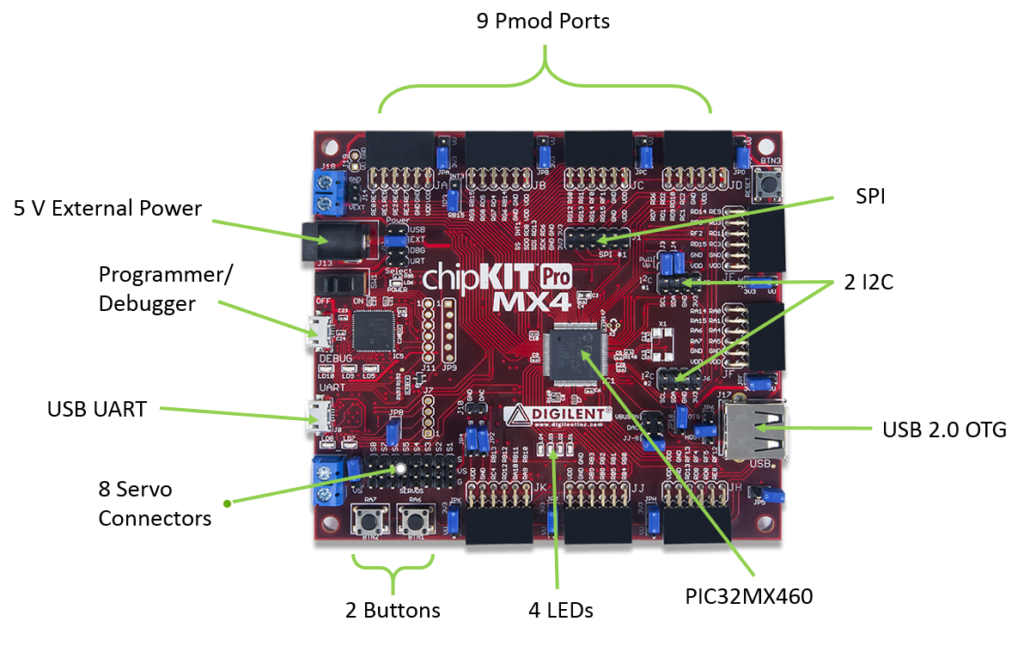 As visually apparent by the above images, the chipKIT Pro MX4 has many more Pmod ports available to connect to Digilent’s diverse line of Pmods. Again, the additional peripherals onboard the Basys MX3 will make up for this in most introductory embedded systems course. Additionally, the Pmod ports on the Basys MX3 support peripheral pin select (PPS), meaning although there are fewer ports, the ports themselves can support multiple protocols. Users have access to SPI, UART and GPIO via the two Pmod ports onboard the Basys MX3, plus I2C is available via the additional I2C male connector. See the Migration Guide for a detailed pinout comparison between the Pro MX4 and Basys MX3 Pmod ports.

In addition to the Pmod ports, the Basys MX3 adds an Analog Discovery 2 connector on the back of the board for direct connection to Digilent’s low cost oscilloscope/logic analyzer. 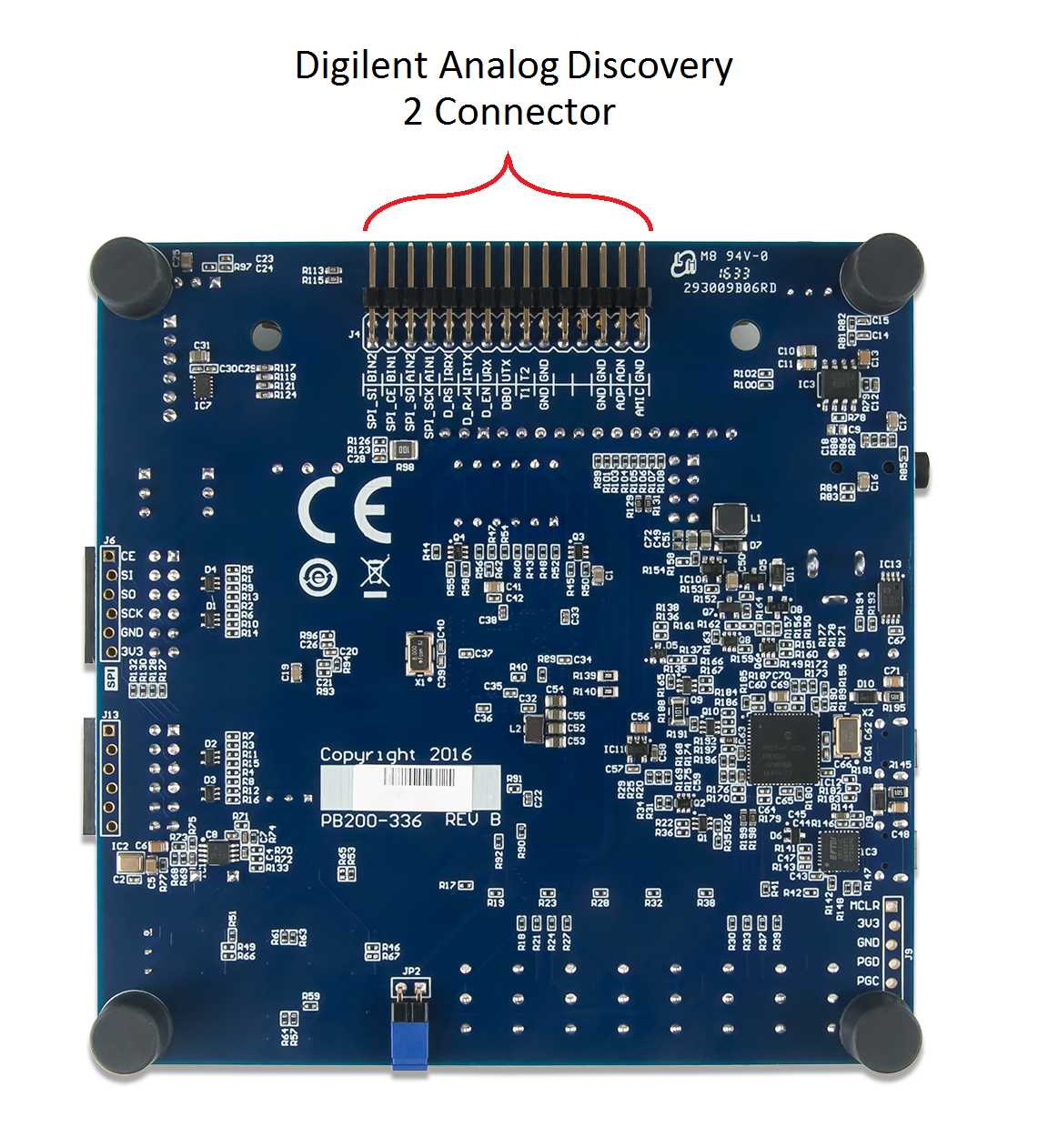 Just like the chipKIT Pro MX4, the Basys MX3 is designed for use with the free and professional grade toolset, MPLAB X. However, the Basys MX3 also comes with a complete set of libraries designed to work in MPLAB X and can be programmed within the Arduino IDE by using the Digilent Core for Arduino.

Unlike the chipKIT Pro MX4, the Basys MX3 also comes with free and open-source coursework that makes using the hardware and updating courses much easier. The coursework is titled “Embedded Systems with PIC32MX370 and Basys  MX3” and contains theoretical teaching material as well as 15 complete labs. For access to the material, visit the Basys MX3 Resource Center. Lab solutions are available to instructors upon request.

Questions or comments? Leave them below or visit the Digilent Forum!