So I’ve been working on a new Instructable for several days now. It involves using simple analog amplifiers with various different analog components like BJT transistors, op-amps, and the like.

The single stage BJT (Bi-polar Junction Transistor) amplifier circuit has been giving me some serious problems. I had it working the other day and thought I was finished with it, so I took it all apart and started on the dual stage amplifier. But then I decided to add some more information to the Instructable, which required re-building it so I could capture the waveform data on the Electronics Explorer Board. And now it isn’t performing like it was before. Sad face.

I’ve tried everything I could think of to reproduce the earlier results to no avail. Not to imply that it isn’t working at all, it is… just not in the same way as before. This leads me to two different possible conclusions as to why. I either:

A) I didn’t re-build it correctly, or…

B) I didn’t fully understand what was happening before and now I understand better. Let’s analyze these options.

First, option A – As you can see, the schematic is relatively simple, so I’m pretty sure that since I’ve quadruple checked everything, I re-built it just fine. That leaves us with…

Option B – I’m not perfect and definitely don’t know all that there is to know about how BJT transistors work. Which is both frustrating and strangely comforting.

After some digging and looking up circuits that I know work, I discovered that I was expecting too much out of my little BJT. It was having a hard time driving the speaker by itself, so by adding a small audio transformer in between, I was able to convert some of the voltage coming from the BJT into current to drive the speaker diaphragm. Here is the new schematic: 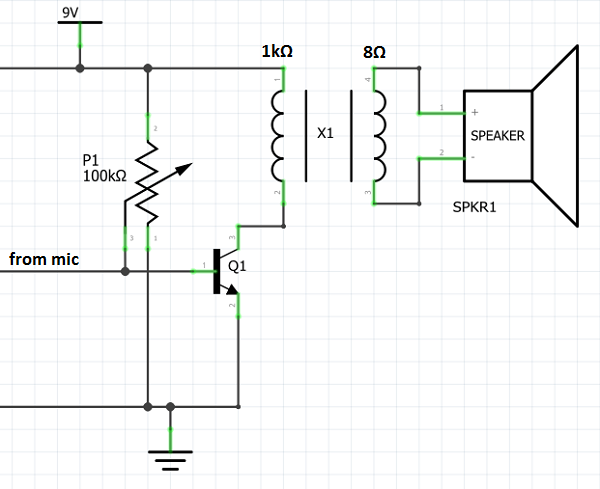 Despite the momentary frustration, in the end all of this means that I have more to grow and develop as a maker, hobbyist, student, and professional. I was also able to finally finish my Simple Analog Amplifiers Instructable!

Beyond learning more about BJTs, by going through the frustration of failure I have come out ahead. I don’t believe I failed at all, but I did learn. Remember to fail forward and learn from the road blocks so that we don’t end up stuck and not growing.

One Comment on “Remember folks – Failure is ALWAYS an option!”