The BeagleBone Black, much like the canines with whom it shares part of its name with, can often feel rather needy. Getting the WiFi set up and the board itself connected to LabVIEW alone took three days. Three days consisting of what felt like a scheduled routine of ‘fix something, break something else’.

The steps to installing the BeagleBone are all on its website, which I followed step-by-step and didn’t run into any problems.

To use the BeagleBone Black with LabVIEW, you have to configure it and connect to it through LINX Target Configuration on LabVIEW. Follow this video for step-by-step instructions on how to do this. If you’re just connected to the computer through USB then you’ll only see one IP address once you login. If you have LAN hooked up to it through a router, you’ll see two IP addresses.

This was the last success I got to enjoy for a while.

I downloaded PuTTY to access the SSH. This is the easiest way to check what the BeagleBone Black is seeing. Turns out not only was my WiFi dongle wasn’t working, my USB port on the BeagleBone wasn’t recognizing the Wi-Pi.

So naturally, my first instinct was to re-flash the BeagleBone Black. After a good 45 minutes of waiting for that to finish, the Wi-Pi still wasn’t turning on.

Then I decided to load Debian 8.4 (the most recent version) onto the SD card and boot the BeagleBone off that.

Well, my WiFi dongle didn’t turn on, and my BeagleBone stopped connecting to LabVIEW through the LINX Target Configuration.

I decided to load Debian 8.3 onto the SD card and boot from that. This was after hours of troubleshooting (Googling, to be specific). It ended up still, unrecognizable by LabVIEW, and this time my PuTTY would give me a blank screen. 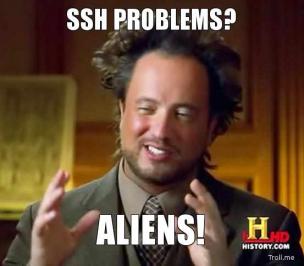 I’d unplug it, thinking it would just settled down from it’s tantrum and miraculously start working as soon as I plugged it back in. My trouble-shooting strategy involves a lot of wishful thinking. It has so far been extraordinarily ineffective, but I know that if I just believe hard enough that one day that strategy will pull through for me.

At this point, I was ready to stop trying to set up the BeagleBone and the Wi-Pi and instead just set them on fire. I ended up doing exactly that a few days later but that’s a story for another time.

I had re-flashed it four or five times and nothing I tried seemed to work. It only served to make everything that was once working fail.  I reloaded 8.3 back on in hopes a clean wipe and re-started it hoping it would sift through the broken stuff. I ended up being able to communicate with the LINX Target Configuration and my PuTTY let me log in to the BeagleBone Black’s SSH.

My Wi-Pi wasn’t working still but I was off to a better-ish start. After hours of troubleshooting, I finally got my Wi-Pi to light up.

After running through some more code and trying not to breathe too hard on my Wi-Pi for fear of angering it again, I got the WiFi up and running. It even connects automatically after a reboot!

Hallelujah! After only a few shed tears and quick photos taken to document the moment, I starting working on the next step of my project. Stay tuned for next week to see if the next step was less frustrating, and perhaps even get a sneak peek at the super secret project itself!