WaveForms is the software interface that controls the Analog Discovery 2, the Digital Discovery, and the Analog Discovery Studio, providing access to all of the bench-top tools. We posted an updated version of WaveForms, version 3.12.2, which is available for download on the Digilent Wiki. This new version of WaveForms includes new exciting 3D views, new protocol interpreters, new cursors, setting improvements, critical Mac OS updates, and more!

Major improvements to the Oscilloscope!

3D views have been added to the Oscilloscope so you can see an XYZ plot, and a 3D spectrogram surface. These changes have been made for 64-bit Windows. 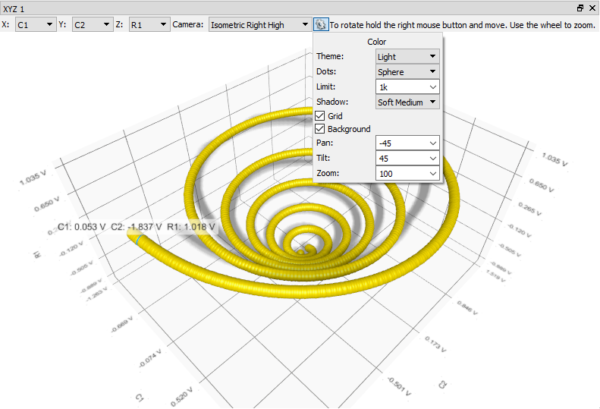 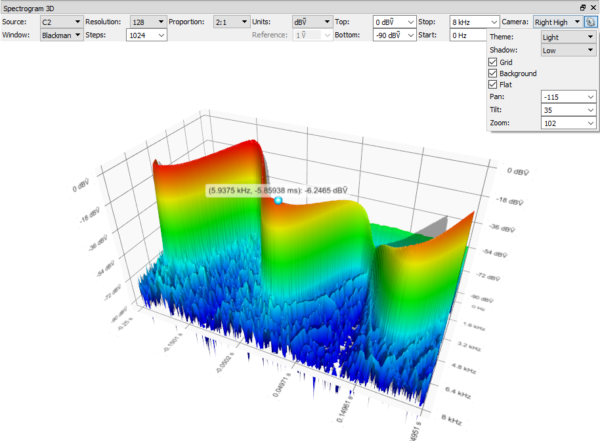 Noise removal has been made easier by the addition of  Lock-In amplifier to the available math channels you can add to the Oscilloscope.

The zero offset can now be set or reset to apply the average level of the last acquisition as zero-level compensation for the selected channels. 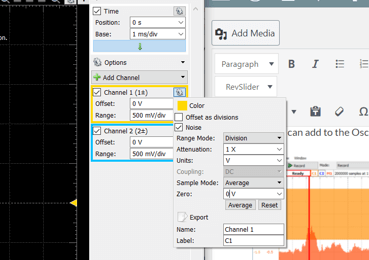 Measurements in the measurement pane can now have the precision set manually in addition to having WaveForms automatically select it. 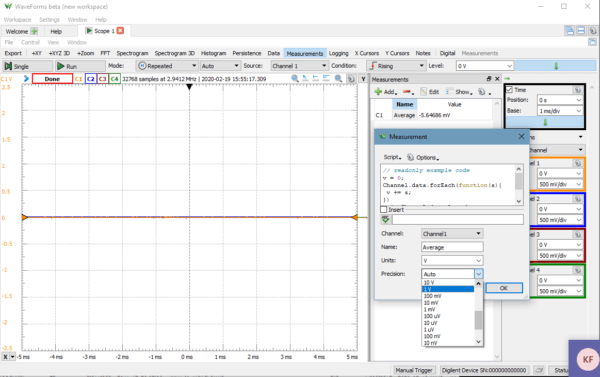 Additional math operations have been added to the simple math channel including ATan and RMS. 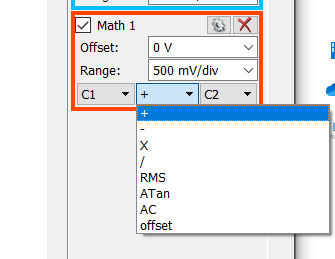 Additional settings in the Waveform Generator:

There is now a period setting in addition to the frequency setting. 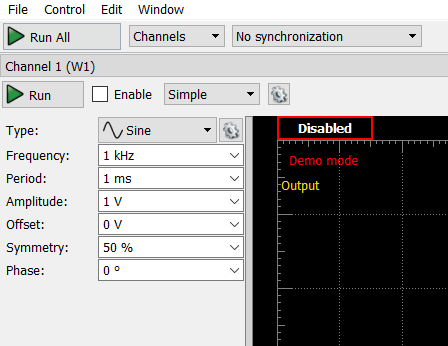 New interpreters in the Logic Analyzer:

There is now an additional SPI interpreter that includes both MISO and MOSI.

An HDMI CEC interpreter has been added to the Logic Analyzer.

The clock edge in the bus interpreter can now be set to “Either” falling or rising and a delay can be set. 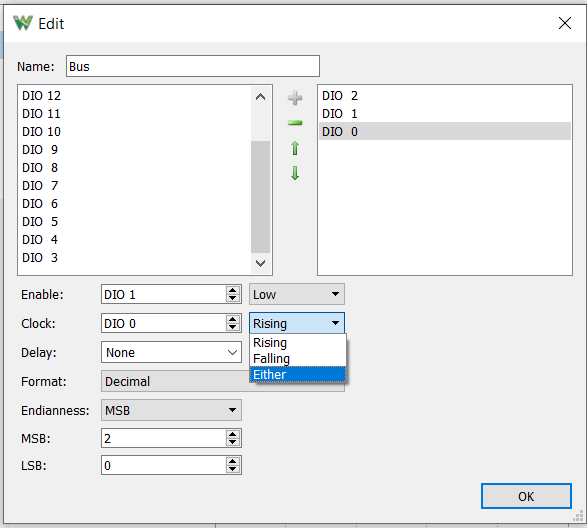 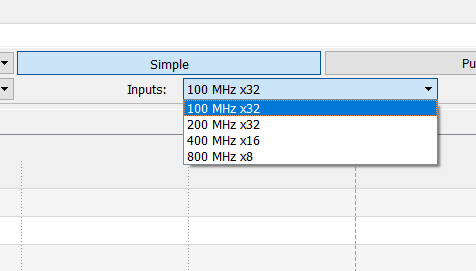 A new option in the pattern generator:

IN the signal and BUS pattern outputs you can now add a delay to the signals. 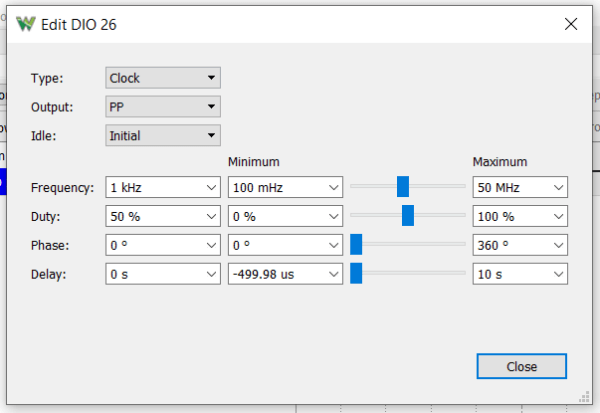 Additional units in the spectrum Analyzer: 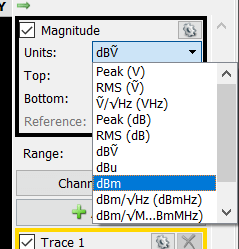 An additional use case for the Impedance Analyzer and Network Analyzer.

You can now set Stop equal to Start which means that a single frequency can be analyzed.

A big addition has been made to the Protocol Analyzer: an AVR programmer with Flash, EEPROM, Fuse, Lock, and Calibration. 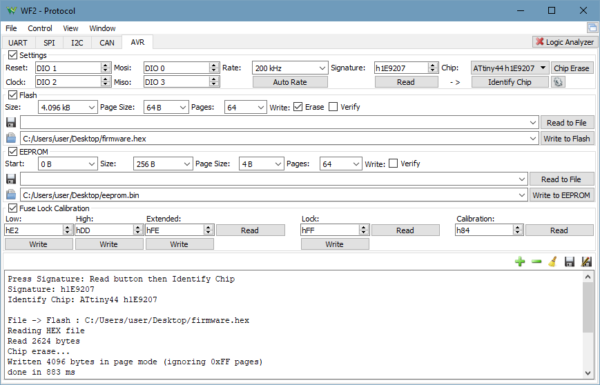 The formats in the UART interpreter now include text, binary, decimal and hexadecimal. 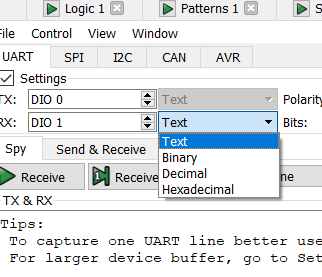 UART SPY mode can now be used on two channels. 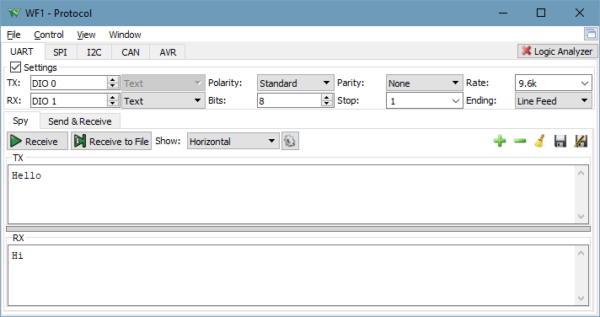 The UART data display can now be set to wrap text, and a limit is available for the number of lines. 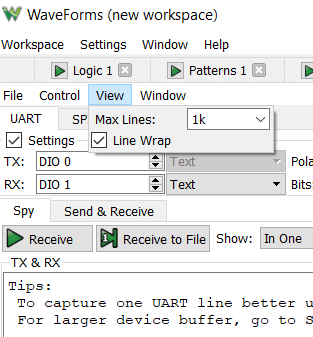 More flexible use in the script editor.

The script editor can be called from another application or the terminal via:  -script myscript.txt/js -runscript

There is now an optional include and multiple files can be used in the same script.

There are additional options to open or save to a text file as well as a JavaScript file. 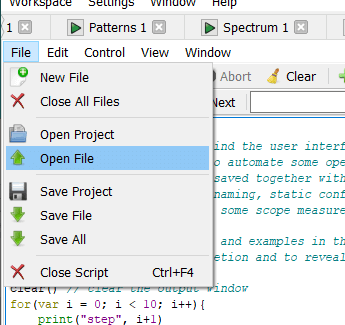 There is now a system monitor on both Analog Discovery’s, the Analog Discovery Studio, and the Digital Discovery for the USB voltage and current as well as Auxiliary power, Voltage, Current, and device temperature. 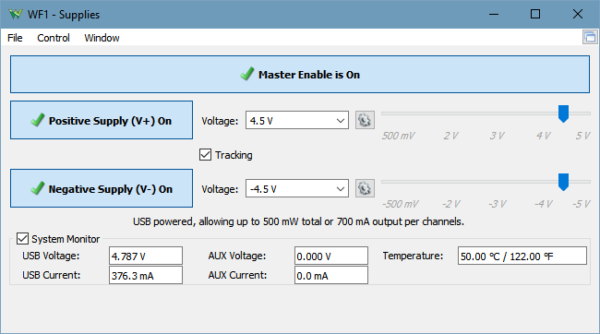 There is now a fine adjustment available for the system frequency. 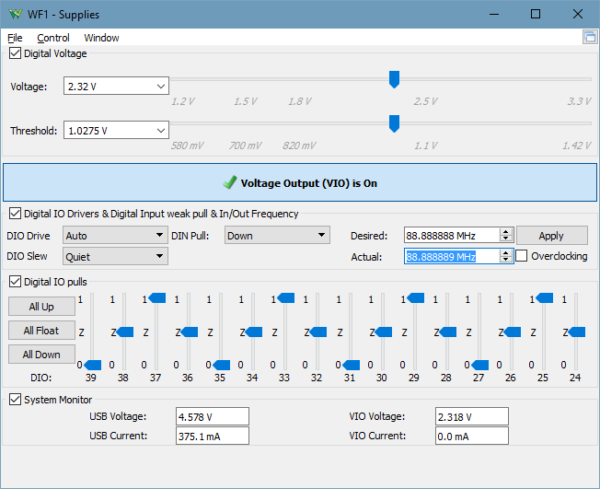 We also made some additions to the general WaveForms options for a better overall experience.

The work space list is now the same in each application when multiple applications are running.

The direction the scroll wheel moves in order to zoom in or out can now be configured as well as where it is active. The application and script fonts can also be changed. 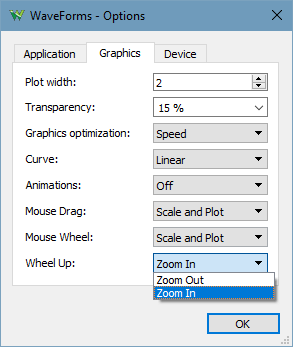 There is now dark theme support for the scripting and coding interfaces. 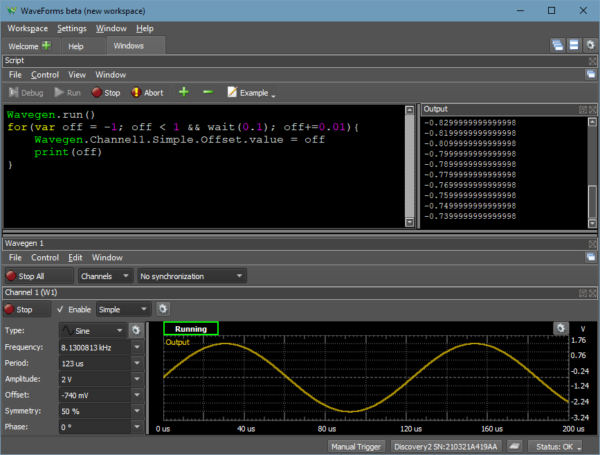 Windows can now be exported as an image in the EPS format.

You can now import data from file option for the Spectrum, Network, and Impedance Analyzer.

There are now horizontal cursors for the Oscilloscope FFT view, Spectrum Analyzer, and Impedance Analyzer. 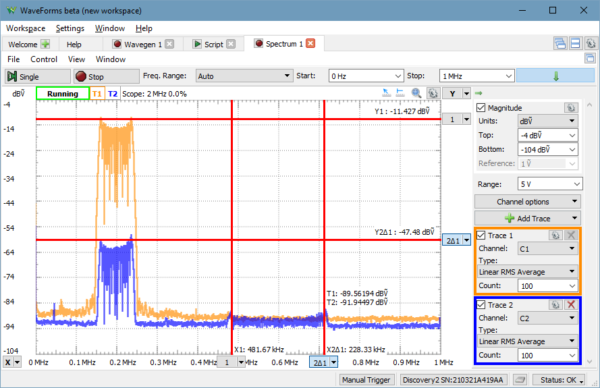 The Scope and Logic Analyzer now remembers the last setting for Show Attenuation, Acquire Noise, Multiple Scale and shows it as the default option.

Several bugs reported via email and the forum were fixed, including:

If you have any comments, feedback or questions on WaveForms, they are always welcome on the Digilent Forum.