Need some biomedical sample signals? We can help you in a heartbeat!

A new website that we have launched in beta is aimed at being a valuable resource for WaveForms example workspaces, data, and projects. Today, I am highlighting one asset from the site, a sample signal of a human heartbeat pulse!

Using WaveForms, you can capture signals and export the data to be used at a later time or import a known signal to test a circuit’s response. For example, this pulse signal could be useful in testing a biomedical application that has a heartbeat pulse for an input. This signal can be imported into the Waveform Generator and used as an input if having a human connected is inconvenient or if the test requires some repeated signal over time. A known pulse signal could also provide valuable reference in the Oscilloscope to compare a new or other recorded signal. 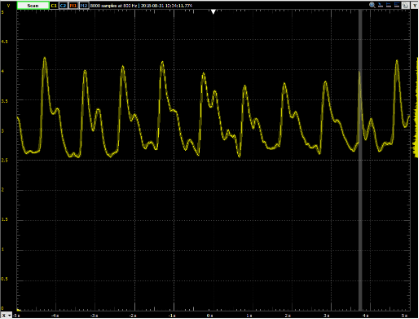 This sample heartbeat pulse was captured using a photoresistor, a technique called “photoplethysmography” which senses changes in blood reflectivity as it pulses through a finger or earlobe. The file can be imported into the Oscilloscope in WaveForms and viewed as an acquisition. Check out the Sample Signal: Heartbeat post for the workspace and acquisition download.  This project can also be found on Hackster.com here.

If you have a signal you’d like to see on testandmeasure.org feel free to suggest it using the suggestion form! Click on the “HAVE AN IDEA?” link on the navigation bar and let us know!