There are a variety of very cool DIY animatronic hands online, however for this project I wanted to build something that could be reasonably applied as a prosthetic. With this version I was aiming more for proof of concept, however I would be interested to see what could be expanded upon with this idea. Additionally I think it could have some fun applications as a prop or even a Halloween decoration!

My goals in the beginning were I wanted it to be reasonably priced, and something anyone could build at home. In order to achieve even the functionality, I would need to include not only the mechanical hand itself, but also a control system that allowed the hand to feasibly be used as well, a hand. 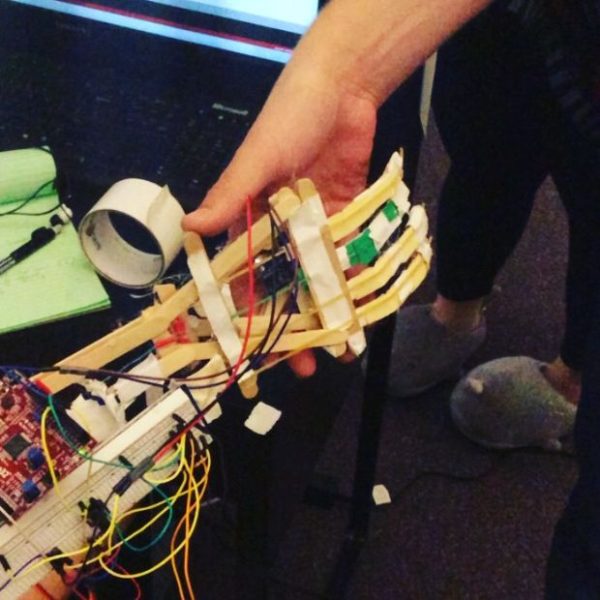 This presented a bit of a challenge. Modern prosthetic limbs are commonly operated in one of two ways: Either by using EEG or some other connection that allows it to be controlled by thought (too expensive and price-accessible headsets tend to be uncomfortable), or by tapping into existing nerves (too dangerous and complicated for a D.I.Y. project).

Eventually I settled upon a design. I figured that the most efficient way to build a truly “homemade” prosthetic hand would be to approach it less like I am trying to build an extension of the person, and more like I am building an independent robotic system that can operate in conjunction with the person. Thus the reflex-based prosthetic hand was born.

This hand functions on a reactive basis, acting in response to its environment. The design utilizes sensors and Pmods to understand its surroundings, and subsequently the users intention. It then acts upon its intuition.

So for example, if it senses an object within close proximity to the palm, it will close the fingers and hold the object for ten seconds.

I used the following materials for this project:

The hand employs a basic clasping motion. It has one degree of motion, and is capable of picking up small objects. It also is able to perform basic hand-related tasks such as a handshake or a semi-creepy wave.The motion is achieved when the uC32 tells the servo to pull the strings attached to the fingers to close the hand! I originally set it up with an ultrasonic rangefinder so it could sense where objects were and clasp when they fell within a predetermined range.

However I soon realized that this was not the most effective system since the rangefinders are more for use at a longer range. So I decided to switch to the Pmod ALS for my palm sensor. The light sensor method was much more effective and sensitive. In the future I would like to extend the project to include a release system that is not just time based, perhaps using the Pmod GYRO to detect the user “shaking” the hand to release the object.

If you would like to know more or are interested in building the hand yourself, please check out my full Instructable here. Also feel free to explore my other installments in the D.I.Y. prosthetic appendages series…including a mechanical tentacle!