The core of any of the instrumentation Digilent devices (Electronics Explorer, Analog Discovery, Analog Discovery 2, Digital Discovery, etc.) is an FPGA circuit loaded with the associated configuration file. The WaveForms software communicates with the FPGA and provides user interfaces as a workbench of instruments.

A DIO line can be set as Output in at most one Pattern Generator object. When a line is used by the Static I/O as an output element (Slider, Button, or Switch), this has priority over the signal configuration in Patterns (not shown in the block diagram).

Signals and Buses generate time sequenced output values: the sampling rate derives from the system clock, and the sample values are either algorithmically generated (clocks, pulses, counters, etc.) or read from a Pattern Memory (custom). In the latter case, a Counter points the current sample in the Pattern Memory.

Since the size of the Pattern Memory is limited to 2n locations, the input buffer IB is only present for the first n DIO pins (0 to n-1). However, any DIO pin can implement a Boolean function of DIO pins 0 to n-1.

Since the Pattern Memory is implemented in an FPGA Block RAM, the Boolean function is synchronized on the prescaled clock.

As long as none of the DIO pins defined as outputs in a ROM logic object is also used as input in the same object, there is no feedback path and the Boolean function is combinatorial. However, the output is synchronized to the prescaled clock.

A DIO pin used as input (argument) in its own Boolean function closes a feedback loop, and the DIO pin is a state bit. One or more state bits build a state variable in a Finite State Machine (FSM).

The figure below shows the generic block diagram of a Mealy FSM mapped on a ROM logic object. A Moore FSM does not use the Inputs in Output Logic block. 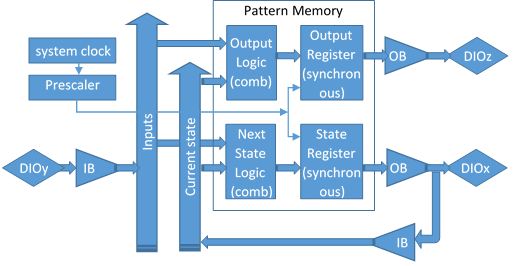 In the Pop-up window, select the Properties tab. Select or type in the synchronizing frequency. Use the green “plus” signs to add input and output signals in the left and right lists. Use the green arrows to move signals up or down in the lists. The list order will be preserved in the Truth Table tab.

The rules and ROM logic GUI operation is demonstrated in the following examples.

In Figure 5, the ROM logic object is named AND3 (optional). DIO0…DIO2 are selected as inputs, DIO3 as output. The signal names are changed to i0…i2, respectively o3 (optional). The synchronizing frequency is set to 5MHz, meaning the output signal will be synchronized to a 5MHz clock with 0° phase, relative to the moment of running the Pattern Generator; this way, the output signal is synchronized to other signals generated by the Pattern generator.

In the Truth Table tab, the first line describes the default case, with the output signal value of 0. With three X-es in the input pane, this line is equivalent to 23=8 expanded lines. However, the second line overrides one line out of the eight, forcing the output signal to 1 when all inputs are 1. The equivalent VHDL code is:

Notice that the Truth Table lines are “sequential”, with the same meaning as the lines within a VHDL process: a line can override the effect of previous lines, in both cases. 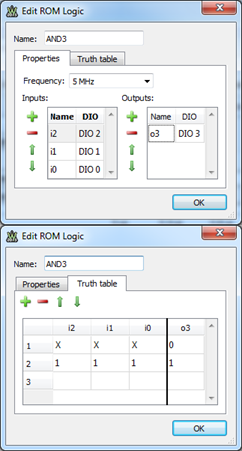 To verify the behavior of the 3 input AND gate, Run the Pattern Generator and the Static IO. Set the DIO2…DIO0 as Switches and keep DIO3 as LED, in the Static IO. Notice that DIO3 is High only when all DIO2, DIO1 and DIO0 are High. Make sure you close the Static IO.

To observe the dynamic behavior of the synchronized 3-input AND gate, define a binary counter on DIO2…DIO0 in the Pattern Generator. Set the clock frequency to 3MHz. (However, the closest frequency WaveForms can generate is 2.941MHz.) This frequency is chosen not to be integer multiple or submultiple of the ROM logic frequency (5MHz). Also define a 5MHz clock on DIO4 (same as for the ROM logic). This clock is not used by the ROM logic, but will serve as reference for observation in the Logic Analyzer.

Open a Logic Analyzer. Add/Bus with DIO2…DIO0, and Add/Signals DIO3 and DIO4. Set the trigger on the falling edge of DIO2. Set convenient time base and position. Run Pattern generator and Logic analyzer. Observe instable image for DIO3 and DIO4, as their frequency is not correlated with Bus1.

Run a Single step in the Logic analyzer. Observe that DIO3 (the AND gate output) does not synchronize with the edges of Bus1 inputs, but with DIO4: DIO4 is not the actual ROM Logic clock, but it has the same frequency and phase, so it can be used as an image of the actual ROM Logic clock. Since the ROM Logic is synchronized to the completion of each clock period, and DIO4 starts with a 0 and continues with a 1, the DIO3 seems to be synchronized on the falling edge of DIO4. 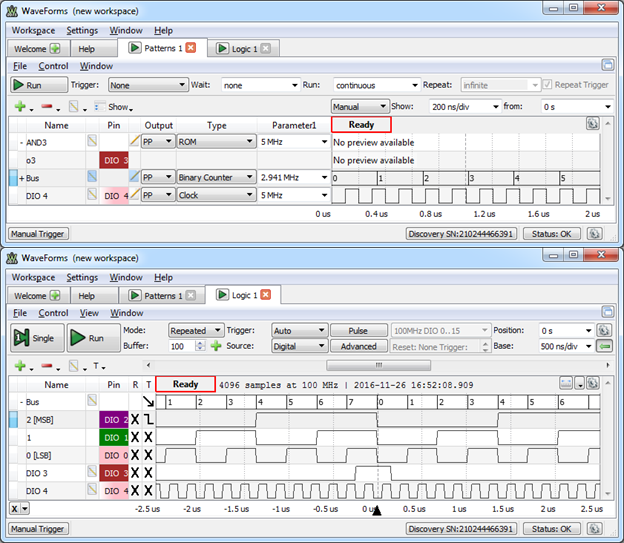 Figure 7 Generating input signals and reference clock for the 3 input synchronized AND gate (up) and observing the dynamic behavior (down).

In the figure below, DIO8 is renamed CE and is used as Count Enable. DIO7…DIO0 are renamed c7…c0 and are the state/output bits of the 8-bit binary counter. Notice how X-es, signal names, and negated signal names are used in the Truth Table. The clock for the counter is 100kHz. The Truth Table was written in Excel (colored background area in sheet CounterWithCe8Bit of RomLogicTruthTables.xlsx) and copied in the appropriate tab.

All nine lines are equivalent to 29=512 expanded lines and define all possible cases (8 bit+1 Count Enable).

To verify the behavior, add a clock signal on DIO8 (Frequency=1kHz, Duty Factor=80%). As defined above, DIO8 is Count Enable for the binary counter. 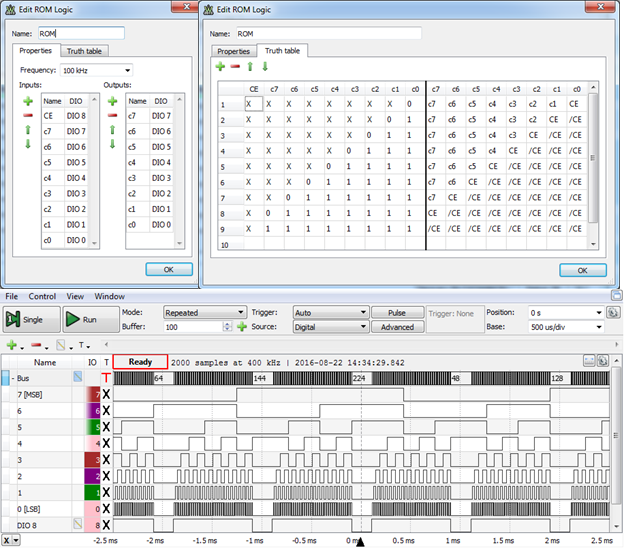 In the figure below, an n-bit binary counter generates a digital sawtooth signal. The comparator drives DIOx = 1 when the sample value is greater than the counter content.

The DIOx carrier frequency is:

If the n-bit sample is constant, the DIOx pin is driven with constant Duty Factor:

A 5-bit bus is created to generate the modulator n-bit samples (DIO4…DIO0). For the first experiment, the bus type is set to Number, to generate a static value between 0 and 31.

A 5-bit counter is implemented in a ROM logic object, as below, on DIO9…DIO5, renamed c4…c0. The Truth Table was written in Excel (sheet PWM in RomLogicTruthTables.xlsx) and copied in the Truth Table tab. The clock frequency is set to 1MHz. 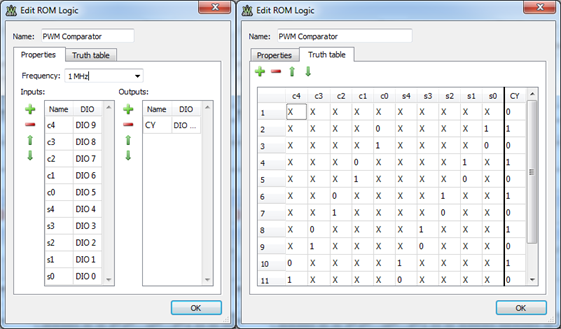 An external RC Low Pass Filter (100kΩ, 1nF) is used to build the analog signal, removing the carrier from the PWM signal. The WaveForms scope shows the PWM signal (C1) and the filtered signal (C2).

Notice the C1 frequency and duty factor (both on the graphical view and measurement pane):

Modify the sample value in the Pattern Generator and observe the effect on the scope signals.

Variable n-bit sample can be used as a modulator signal. For the second experiment, set a custom 5-bit Bus 1 in the Pattern Generator, to drive a sinus signal with 100 samples per period. Generate a .csv file, with 100 values of form (sheet SinusSamples in RomLogicTruthTables.xlsx):

Make Bus1 custom and import the .csv file. You can also copy the samples from the Excel file and paste them into the Sample column, in the Edit Custom Bus window.

Set the clock frequency to 200kHz, for a sinus frequency of: 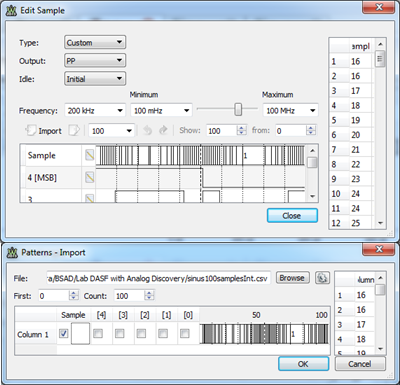 The scope shows the variable Duty Factor PWM signal on C1, and an analog signal on C2, approximating a sinus. The carrier frequency is constant (same as above). The Duty Factor is variable with a mean value of 50%.

In the figure below, an n-bit accumulator is used to add the sample value over and over. The Carry Out bit is the Pulse Density Modulated (PDM) signal. The accumulator is refreshed with fcnt frequency, while samples succeed with fsample rate. Same frequencies and names are used as for PWM, for comparison.

For being able to switch very fast from PWM to PDM and back, a second pattern Generator instance is open from the already existing one:

A 5-bit PDM modulator is implemented in the PDM Accumulator ROM logic object, with DIO 9…DIO5 = a4…a0 as “Accumulator”, DIO4…DIO0 = s4…s0 as “Sample” and DIO10 as “CY” which is the PDM signal (copy colored background area in sheet PDM of RomLogicTruthTables.xlsx and paste into the Truth Table).

The truth table is fully expanded, with 1024 lines. The left pane contains all binary values of DIO9…DIO0. The right pane contains the 5-bit + carry accumulated sum:

To compare with PWM, similar examples are used. The same external RC filter, the clock frequency of the modulator, the sinus Sample Memory and sample frequency are all the same as in the corresponding PWM experiments.

In the static experiment, the same duty factor is generated, with a much higher frequency, resulting in a much smaller ripple of the analog signal.

In the dynamic experiment, the same sinus custom Bus1 was used, as for the PWM. The average Duty Factor is again around 50%, the frequency is variable and the average frequency is much higher compared to PWM, for the same clock frequency. The ripple of the analog signal is also much smaller.

Having both instances of the Pattern generator open, is very easy to run them alternatively for easy comparison on the scope instrument. Hitting Run on one instance automatically turns the other instance in Busy state.

The spectrum analyzer instrument is used to analyze data in the frequency domain. The two traces correspond to the two scope channels in the experiments above. In the spectral view, a cursor is set at fcarrier. Some parameters of the modulated and analog signals are shown in the measurements window.

The carrier fundamental and harmonics are significant for PWM, while PDM spread those components more uniformly in the spectrum.

The measurements have much better values for SFDR, SNR, SINAD and ENOB in the case of PDM. 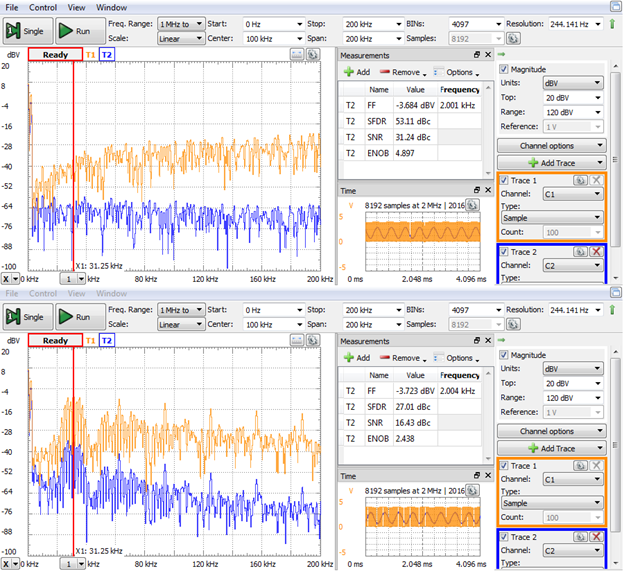