WaveForms™ provides an interface that allows users to interact with Digilent Analog Design hardware, such as the Analog Discovery™ and Electronics Explorer™. While the WaveForms application offers a refined graphical interface, the WaveForms SDK provides access to a public application programming interface (API) that gives users the ability to create custom PC applications.

This WaveForms SDK manual describes the main components and architecture of the WaveForms system and details each function contained in the WaveForms API. The SDK package also offers examples demonstrating how to identify, connect to, and control analog hardware devices. The WaveForms software, as well as the SDK, can be downloaded for free from the WaveForms Resource Center. 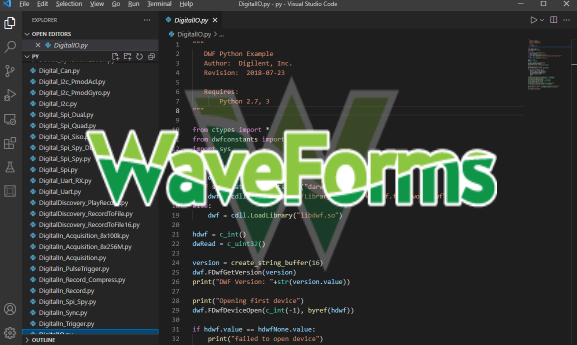 The static library is located in Windows through the install path:

The C header file is located in:

Working code examples are provided with the SDK to demonstrate basic use of each API function set. You can find samples in the installation directory, which are located here:

The DWF Library uses Digilent Adept Runtime, which provides basic communication with the targeted hardware instruments (i.e., Analog Discovery and Electronics Explorer). Although the Adept Runtime is an integral part of the WaveForms System, knowledge of its structure is not required to write custom applications.

On Mac OS X the WaveFroms Runtime (including Adept Runtime) is installed to:

Basic usage of the WaveForms API can be broken down into the following steps:

There are nine main groups of API functions, each named with different prefixes:

Each instrument is directly controlled using three types of functions in the API:

Note: Although there are multiple “Status” functions for each instrument, these functions are the only ones that actually read data from the device.

There are several type definitions and corresponding constants in the dwf.h include file. The majority of them are used as parameters. When a hardware device is opened, a handle is returned (HDWF), which is used to access and finally close in all instrument API functions.

The following examples are provided in Python and C++ language.

To compile and link the c/cpp applications with the dwf library use:

The API functions won’t fail when a parameter pointer is NULL or when a setting (*Set) parameter value is out of limits. To verify the actual setting value, use the *Get API return the actual value.

The indices used in function parameters are zero-based.

The global trigger bus allows multiple instruments to trigger each other. These trigger source options are: 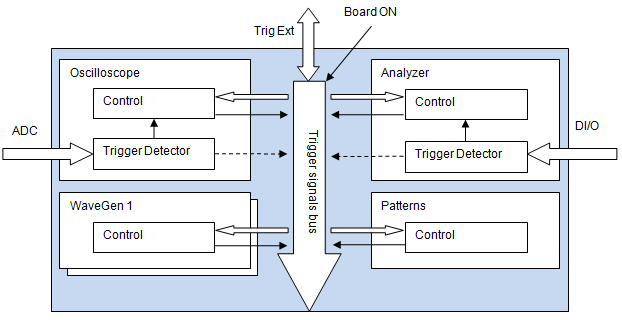 The Analog In instrument states:

Note: To ensure consistency between device status and measured data, the following AnalogInStatus* functions do not communicate with the device. These functions only return information and data from the last FDwfAnalogInStatus call.

The oscilloscope channel settings are identical across all channels.

The trigger is used for Single and Record acquisitions. For ScanScreen and ScanShift, the trigger is ignored. To achieve the classical trigger types:

The following functions configure the trigger detector on analog in channels. To use this set trigger source with FDwfAnalogInTriggerSourceSet to trigsrcDetectorAnalogIn.

The Analog Out instrument states:

The analog out channels can run independently or synchronized using the master parameter. The states are defined by trigger, wait, run, and repeat options. It is enough to start with FDwfAnalogOutConfigure (the master channel) the slave channels will also start. 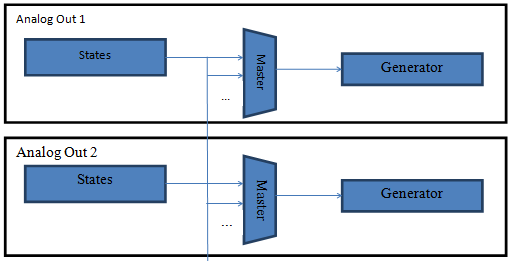 The device output signal is output from carrier buffer but can also be frequency and/or amplitude modulated.

The Carrier/FM/AM nodes can be configured by selecting with the AnalogOutNode constants.

The AnalogIO functions are used to control the power supplies, reference voltage supplies, voltmeters, ammeters, thermometers, and any other sensors on the device. These are organized into channels which contain a number of nodes. For instance, a power supply channel might have three nodes: an enable setting, a voltage level setting/reading, and current limitation setting/reading.

The Digital In instrument states:

In order to use trigger on digital in pins, set trigger source with FDwfDigitalInTriggerSourceSet to trigsrcDetectorDigitalIn.

To trigger on a pulse configure the following: FDwfDigitalInTriggerCountSet (hdwf, 1, 0);

Glitch/Less: To trigger on glitch, a pulse length at most the specified value:

Timeout: To trigger on pulse timeout, on a pulse after the specified minimum time expires:

More: To trigger on pulse ending slope which is longer than the specified minimum time:

Length: To trigger on a pulse length with the specified minimum and maximum lengths use:

This states machine controls all digital out channels. 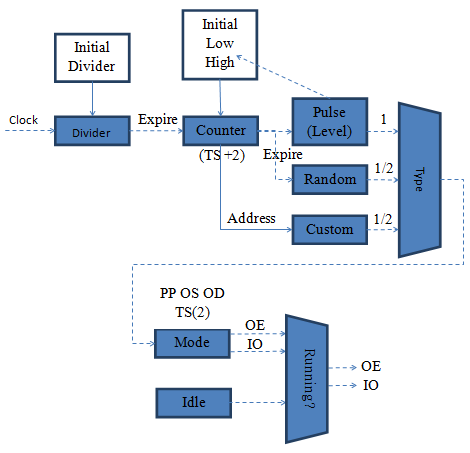 The Counter is used for: 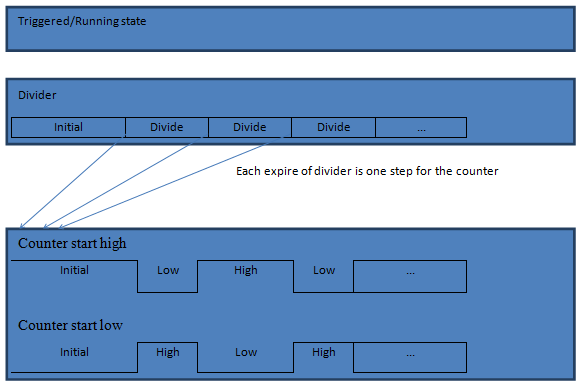 For pulse signal the initial level and initial value are specified with FDwfDigitalOutCounterInitSet function. These are loaded when entering Running state.

The following play functions are supported by Digital Discovery.

The DUT (Device Under Test) stands for the inductive or capacitive load to be analyzed and Resistor is the reference resistor. The resistor value depends on the load value and frequency.

The protocols use the Digital-In/Out resources to create various communication protocols. Only one of the protocols can be used at a time and no digital-io or out other functions.

For the DigitalOut and IO functions, and AnalogIO DIOPP/PE the indexing 15:0 refers to DIO39:24. The Digital Discovery has tree AnalogIO channels. The master enable activates the VIO output.

The following functions are replaced by FDwfAnalogOutNode *providing access to the Amplitude and Frequency Modulation of Analog Out channels.