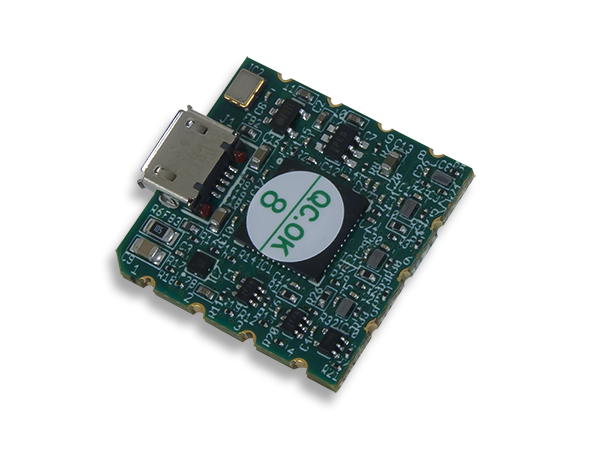 The Joint Test Action Group (JTAG)-SMT2 is a compact, complete and fully self-contained surface-mount programming module for Xilinx field-programmable gate arrays (FPGAs). The module can be accessed directly from all Xilinx tools, including iMPACT, Chipscope, eFuse, Vivado and EDK. Users can load the module directly onto a target board and reflow it like any other component.

The JTAG-SMT2 uses a 3.3V main power supply and a separate Vref supply to drive the JTAG signals. All JTAG signals use high speed, 24mA, three-state buffers that allow signal voltages from 1.8V to 5V and bus speeds of up to 30MBit/sec. The JTAG bus can be shared with other devices as systems hold JTAG signals at high-impedance, except when actively driven during programming. The SMT2 module is CE certified and fully compliant with EU RoHS and REACH directives. The module uses a standard Type-A to Micro-USB cable available for purchase from Digilent, Inc. 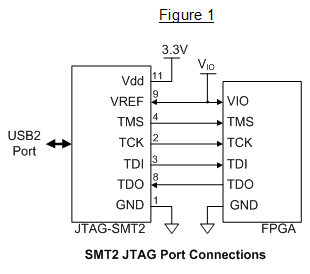 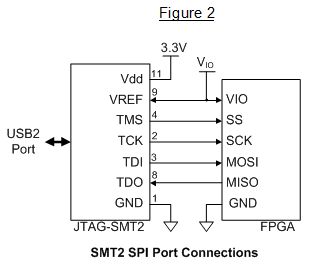 Users can connect JTAG signals directly to the corresponding FPGA signals as shown in Figure 1. For best results, mount the module adjacent to the edge of the host PCB over a ground plane. Although users may run signal traces on top of the host PCB beneath the SMT2, Digilent recommends keeping the area immediately beneath the SMT2 clear. Note: Keep the impedance between the SMT2 and FPGA below 100 Ohms to operate the JTAG at maximum speed. The SMT2 improves upon the SMT1 with the addition of three general purpose IO pins (GPIO0 – GPIO2) and support for interfacing IEEE 1149.7-2009 JTAG targets in both 2 and 4-wire modes.

In addition to supporting JTAG, the JTAG-SMT2 also features eight highly configurable Serial Peripheral Interface (SPI) ports that allow communication with virtually any SPI peripheral. (See figure 2) All eight SPI ports share the same SCK, MOSI, and MISO pins, so users may enable only one port at any given time. The table in figure 3 summarizes the features supported by each port. The HS2 supports SPI modes 0, 1, 2, and 3.

Note: The Xilinx tools expect GPIO2/CS3 to be connected to the SRST_B pin on a Zynq chip. As a result, SPI ports 6 and 7 may not be used for SPI communication if the Xilinx tools are going to be used to communicate with the SMT2.

The JTAG-HS2 supports several scan formats including the JScan0-JScan3, MScan, and OScan0 - OScan7. It is capable of communicating in 4-wire and 2-wire scan chains that consist of Class T0 – T4 JTAG Target Systems (TS). (See Figure 4 & 5) 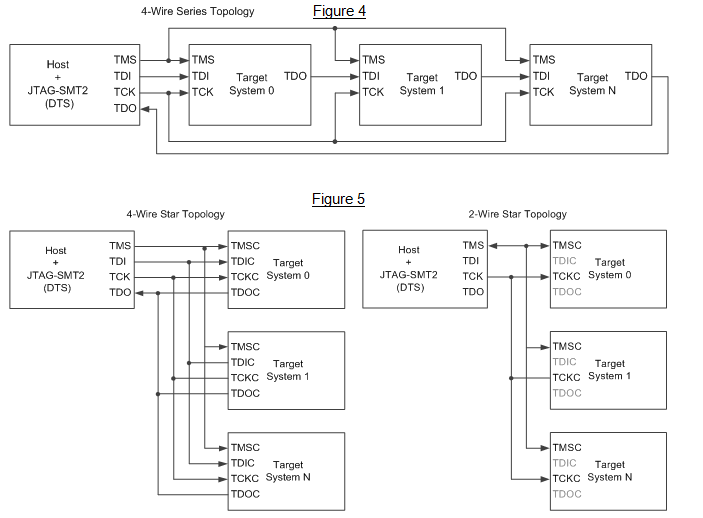 The IEEE 1149.7-2009 specification requires any device that functions as a debug and test system (DTS) to provide a pull-up bias on the TMS and TDO pins. In order to meet this requirement, the JTAG-SMT2 features weak pull-ups (100K ohm) on the TMS, TDI, TDO, and TCK signals. Though not required in the specifications, the pull-ups on the TDI and TCK signals ensure that neither signal floats while another source is not driving them. (See figure 6)

Users should place a current limiting resistor between the TMS pin of the SMT2 and the TMSC pin of the TS when using the JTAG-SMT2 to interface with an 1149.7 compatible TS. If a drive conflict occurs, this resistor should prevent damage to components by limiting the amount of current flowing between the pins of each device. A 200ohm resistor will limit the maximum current to 16.5mA when using a 3.3V reference. (See Figure 7 & 8) While this level of resistance should be sufficient for most applications, the value of the resistor may need to be adjusted to meet the requirements of the TS.

In most cases users can avoid a drive conflict by having applications that use the SMT2 communicate with the TS in two wire mode. Use the applications to reconfigure the TS to use the JScan0, JScan1, JScan2, or JScan3 scan format prior to disabling the SMT2’s JTAG port.

The JTAG-SMT2 has three general purpose IO pins (GPIO0, GPIO1, and GPIO2) that are useful for a variety of different applications. Each pin features high speed three-state input and output buffers. At power up the JTAG-SMT2 disables these output buffers and places the signals in a high-impedance state. Each signal remains in a high-impedance state until a host application enables DPIO port 0 and configures the applicable pin as an output. When the host application disables DPIO port 0 all GPIO pins revert to a high-impedance state. Weak pull-ups (100K ohm) ensure that the GPIO signals do not float while not being actively driven. (See figure 9) 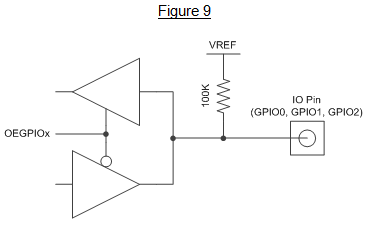 When customers use the JTAG-SMT2 to interface the scan chain of Xilinx’s Zynq platform, they should connect the GPIO2 pin of the SMT2 to the Zynq’s PS_SRST_B pin. This connection allows the Xilinx Tools to reset the Zynq’s processor core at various times during debugging operations. Please see the following “Application Examples” section for more information. Note: The Xilinx tools expect GPIO2 to be connected to the SRST_B pin on a Zynq chip. As a result, GPIO2 may not be used as a general purpose I/O if the Xilinx tools are going to be used to communicate with the SMT2. Note: DPIO port 0 can only be used while both JTAG and SPI are disabled.

Figure 10 demonstrates how to connect the JTAG-SMT2 to Xilinx’s Zynq-7000 silicon when the same voltage supplies both the VCCO_0 (Programmable Logic Bank 0 Power Supply) and the VCCO_MIO1 (Processor MIO Bank 1 Power Supply). In this case the SMT2 has a 100K pull-up to VREF, which operates at the same voltage as VCCO_MIO1. This similar voltage makes it possible to eliminate the external pull-up that is normally required for the PS_SRST_B pin.

Figure 11 demonstrates how to connect the JTAG-SMT2 to Xilinx’s Zynq-7000 silicon when different voltages supply the VCCO_0 (Programmable Logic Bank 0 Power Supply) and VCCO_MIO1 (Processor MIO Bank 1 Power Supply). If the Zynq’s JTAG pins are operating at a different voltage than the PS_SRST_B, it requires an external buffer to adjust the level of the GPIO2 signal. The example in figure 10 demonstrates the use of an open drain buffer to allow for the possibility of adding a reset button. 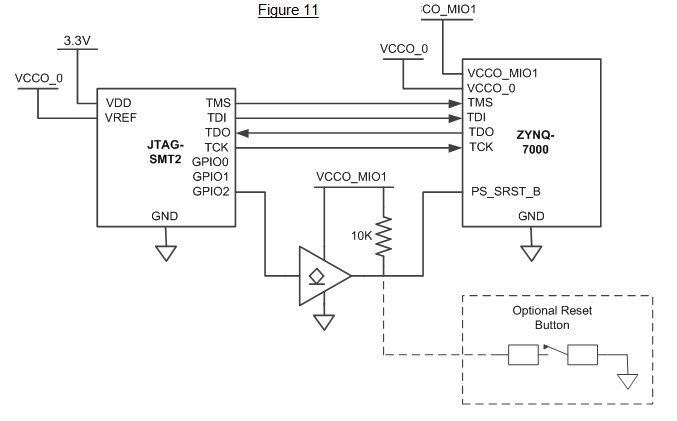 Figure 12 below demonstrates how to connect the JTAG-SMT2 to Xilinx’s Zynq-7000 silicon alongside Xilinx’s 14-pin JTAG header. In this example the open drain buffers allow both the SMT2 and Xilinx JTAG Header to drive the PS_SRST_B pin, which may operate a different voltage than the Zynq’s JTAG pins. 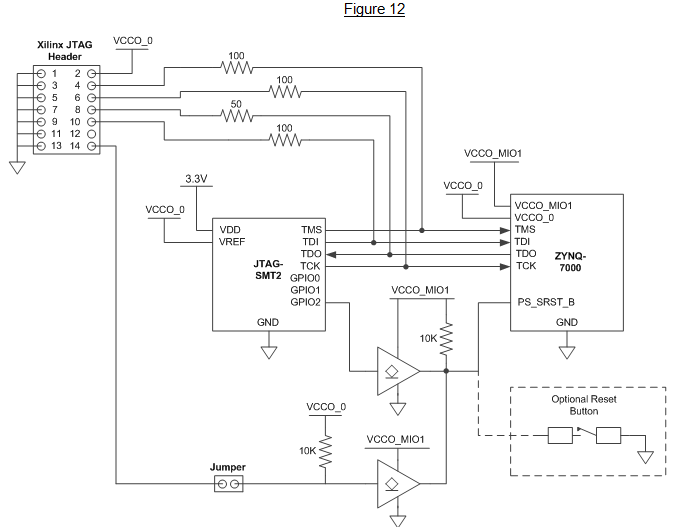 The JTAG-SMT2 is capable of targeting the following Xilinx devices:

The following devices cannot be targeted by the JTAG-SMT2:

Remote device configuration is not supported for the JTAG-SMT2 when used with Xilinx’s iMPACT software. Note: Please see the “Introduction to Indirect Programming – SPI or BPI Flash Memory” help topic in iMPACT for a list of supported FPGA/PROM combinations. Note: Please see the “Configuration Memory Support” section of Xilinx UG908 for a list of the FPGA/PROM combinations that Vivado supports. 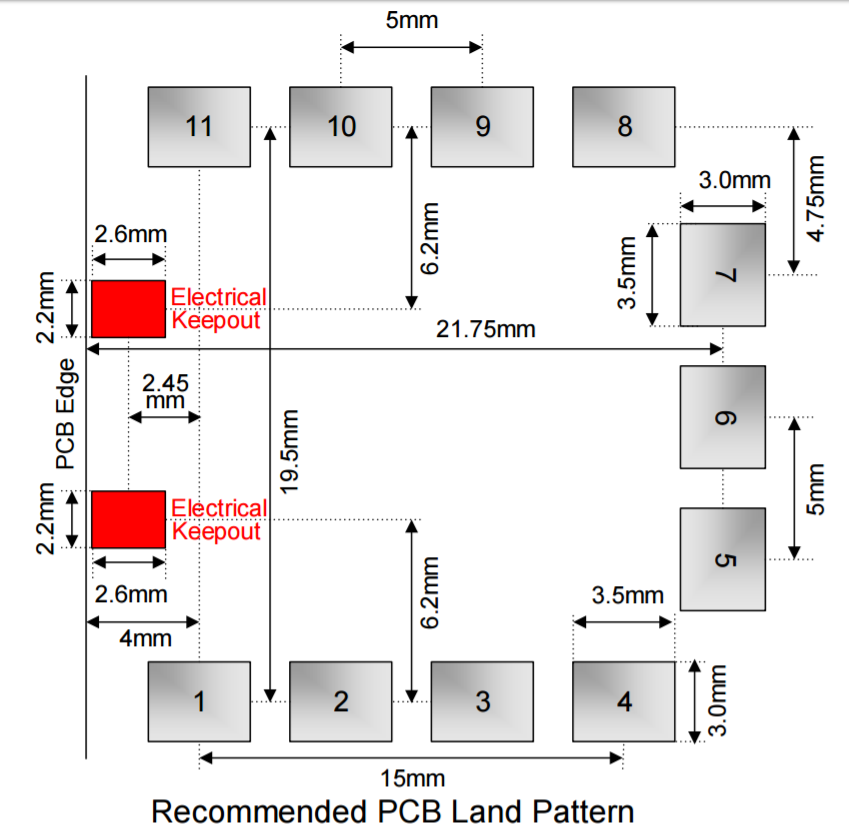 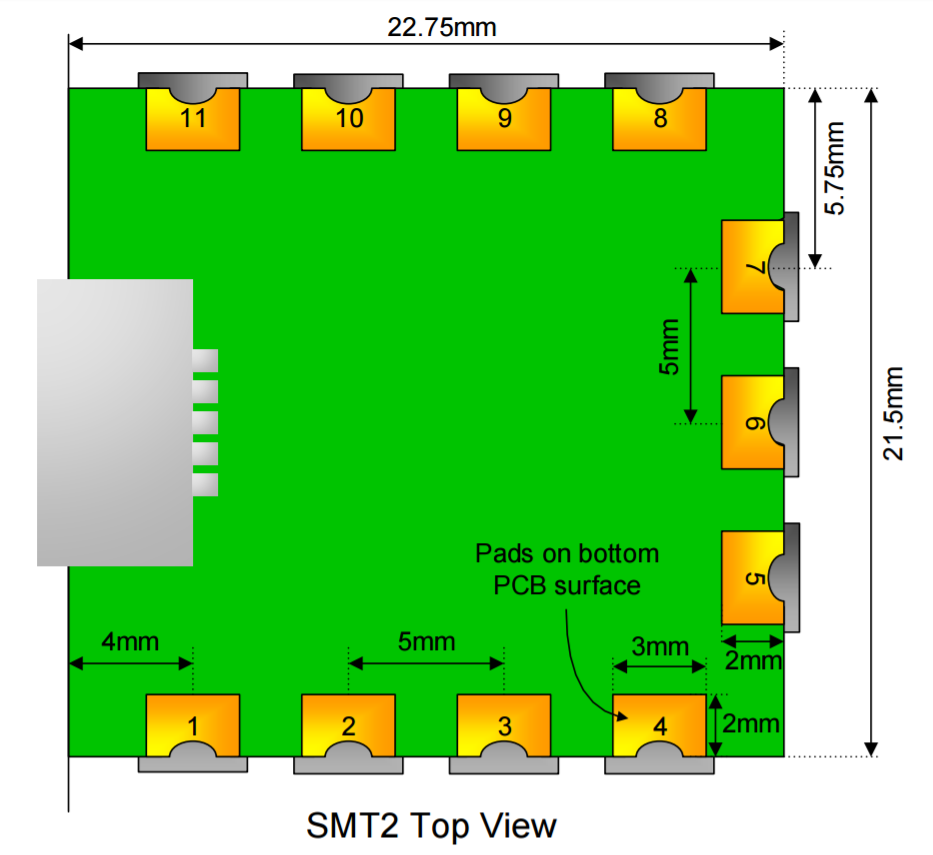 Measurements are in mm

The JTAG-SMT2’s JTAG signals operate according to the timing diagram in figure 13. The SMT2 supports JTAG/TCK frequencies from 30MHz to 8KHz at integer divisions of 30MHz from 1 to 3750. Common frequencies include 30MHz, 15MHz, 10Mhz, 7.5MHz, and 6MHz. (See table in figure 14) The JTAG/TCK operating frequency can be set within the Xilinx tools. Note: Please refer to Xilinx’s iMPACT documentation for more information. 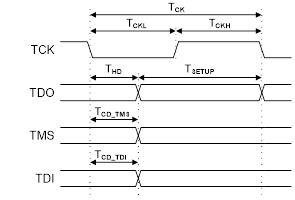 The factory finishes the JTAG-SMT2 signal pads with the ENIG process using 2u” gold over 150u” electroless nickel. This makes the SMT2 compatible with most mounting and reflow processes. (See figure 15) The binding force of the solder is sufficient to hold the SMT2 firmly in place so mounting should require no additional adhesives. 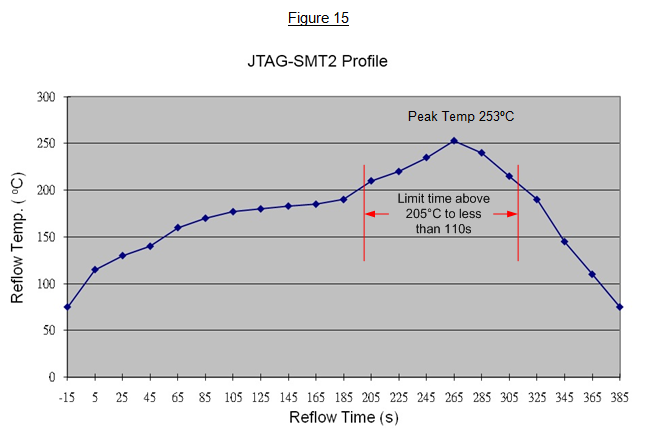 Digilent ships small quantities of less than 45 per order individually packaged in antistatic bags. Digilent will pack and ship larger quantities in groups of 45 positioned in an antistatic bubble tray. (See figure 16)