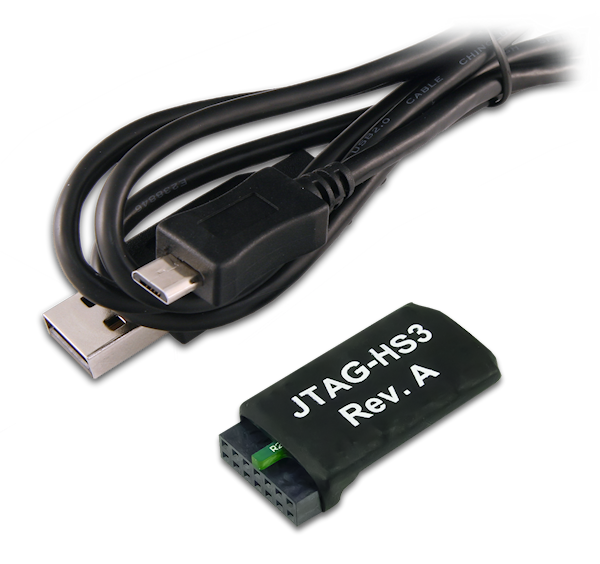 The JTAG-HS3 programming cable is a high-speed programming/debugging solution for Xilinx FPGAs and SoCs. It is fully compatible will all Xilinx Tools, and can be seamlessly driven from iMPACT, ChipScope™, EDK, and Vivado™. The HS3 attaches to target boards using Xilinx’s 2×7, 2mm programming header.

The PC powers the JTAG-HS3 through the USB port and will recognize it as a Digilent programming cable when connected, even if the cable is not attached to the target board. The HS3 has a separate Vref pin to supply the JTAG signal buffers. The high speed 24mA three-state buffers allow the HS3 to drive target boards with signal voltages from 1.8V to 5V and bus speeds up to 30MBit/sec (see Fig. 1). To function correctly, the HS3’s Vref pin must be tied to the same voltage supply (VCCO_0) that drives the JTAG port on the FPGA.

The JTAG bus can be shared with other devices as the HS3 signals are held in high-impedance, except when actively driven during programming. The HS3 uses a standard Type-A to Micro-USB cable that attaches to the end of the module opposite the system board connector. The HS3 is small and light, allowing it to be held firmly in place by the system board connector (see Fig. 2).

The JTAG-HS3 has been designed to work seamlessly with Xilinx’s ISE (iMPACT, ChipScope, EDK) and Vivado tool suites. The most recent versions of ISE and Vivado include all of the drivers, libraries, and plugins necessary to communicate with the JTAG-HS3. At the time of writing, the following Xilinx software included support for the HS3: Vivado 2014.1+, Vivado 2013.3+, and ISE 14.1+. The HS3 is also compatible with ISE 13.1 – 13.4. However, these versions of ISE do not include all of the libraries, drivers, and plugins necessary to communicate with the HS3. In order to use the JTAG-HS3 with these versions of ISE, version 2.5.2 or higher of the Digilent Plugin for Xilinx Tools package must be downloaded from the Digilent website, and the ISE13 plugin must be manually installed as described in the included documentation. The JTAG-HS3 is not compatible with Xilinx Vivado 2013.1 or Vivado 2013.2. In addition to working with the Xilinx tools, the HS3 is also supported by Digilent’s Adept software and the Adept SDK (the SDK is available to download free from Digilent’s website). Adept includes a full-featured programming environment and a set of public APIs that allow user applications to directly drive the JTAG chain. Using the Adept SDK, custom applications can be created to drive JTAG ports on virtually any device. Please see the Adept SDK reference manual for more information.

The Xilinx Tools occasionally require the processor core of the Zynq-7000 to be reset during debug operations. The Zynq platform processor has a pin dedicated for this purpose (PS_SRST_B). Driving the PS_SRST_B pin low causes the processor to reset while maintaining any existing break points and watch points. The JTAG-HS3 is capable of driving this pin low under the instruction of Xilinx’s SDK during debugging operations. In order for this to work, pin 14 of Xilinx JTAG header on the target board must be connected to the PS_SRST_B pin of the Zynq (see Figs. 3 & 4).

The JTAG-HS3 uses an open drain buffer to drive pin 14 of the Xilinx JTAG header (see Fig. 5). This allows the HS3 to drive the PS_SRST_B pin when VCC_MIO1 is referenced to a different voltage than VCCO_0 (see Fig. 6).

Should an accidental short occur between pin 14 and GND, the 100 ohm series resistor protects the buffer from being damaged. While this resistor protects the buffer from being damaged, it also limits the drive strength of the buffer. Therefore, it is necessary for the pull-up resistor (RPU) used to establish the voltage level on PS_SRST_B to be greater than or equal to 1.5K ohms. At the time of writing, Xilinx ZC702, Xilinx ZC706, and Avnet® MicroZed™ all feature 10K pull-ups on pin 14 of the their respective Xilinx JTAG headers. For compatibility with other evaluation platforms, please consult the manufacturer’s schematic. 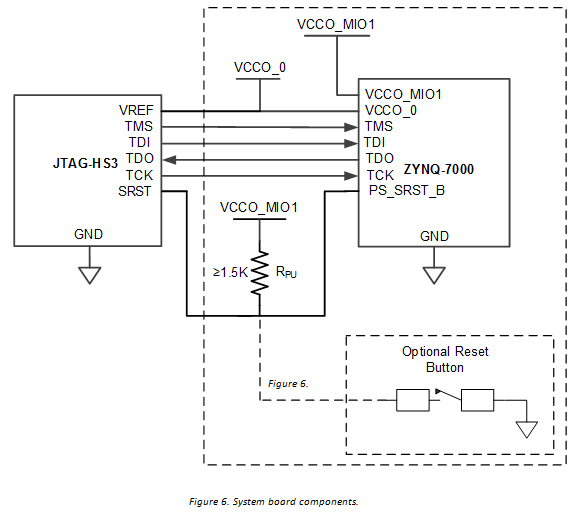 The JTAG-HS3 is capable of targeting the following Xilinx devices:

The following devices cannot be targeted by the JTAG-HS3:

Remote device configuration is not supported for the JTAG-HS3 when used with Xilinx’s iMPACT software.

The JTAG-HS3 uses high speed three-state buffers to drive the TMS, TDI, and TCK signals. These buffers are capable of sourcing or sinking a maximum of 50 mA of current. The HS3 has 100 ohm resistors between the output of the buffers and the I/O pins to ensure the cable does not exceed the maximum limit. To further limit short circuit, additional current resistance may be placed in series with the I/O pins of the HS3 and the target board. However, Digilent recommends limiting the amount of additional resistance to 100 ohms or less as higher resistance may result in degraded operation. 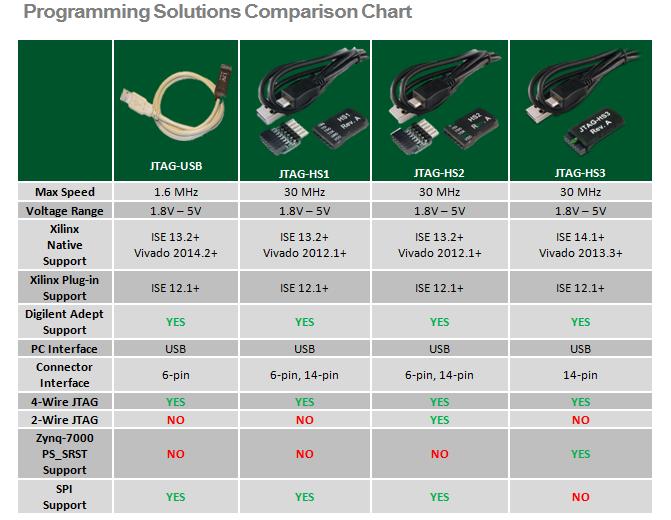