Running a RISC-V Processor on the Arty A7

The Arty A7-100T contains a Xilinx XC7A100T FPGA which is the largest FPGA available for the Arty A7 and is ideal for deployment of softcore processors. These processors can be either proprietary or open source. One of the most popular open source processors is the RISC-V. This tutorial covers building a RISC-V processor, specifically the SiFive Freedom E310. This guide steps through the process of loading the Freedom E310 onto an Arty A7, and programming it using the Arduino IDE. 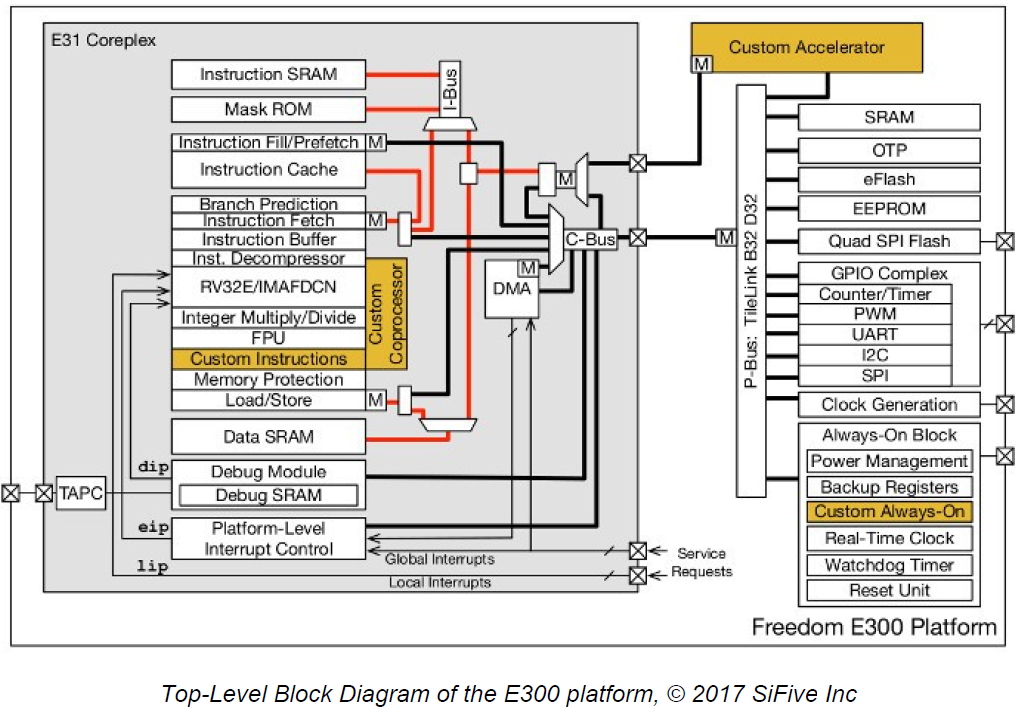 Download and install version 2017.1 of Vivado. Once downloaded, open a terminal window. Then for this tutorial, change directory (cd) to the home directory. This terminal window will be used to build the RISCV processor.

Set up Vivado by sourcing the settings script in the terminal command line, using the following command:

Note: If using a 32-bit Linux environment, source the settings32.sh script instead.

Download and include the Digilent's board files so that Vivado can use them. Use git to download the board definition files from the Digilent repository using the following command:

Once downloaded, copy the 'new' board files into the appropriate Vivado directory. This can be achieved with the following command:

Now it is possible to generate the processor and the FPGA implementation.

Generation and implementation of the processor can be done by running Makefiles.

First, download the SiFive freedom processor by using git and cloning its repository:

Cloning will take a little while due to a large number of files to download. Once downloaded, a new folder called “Freedom” can be seen in the working directory. 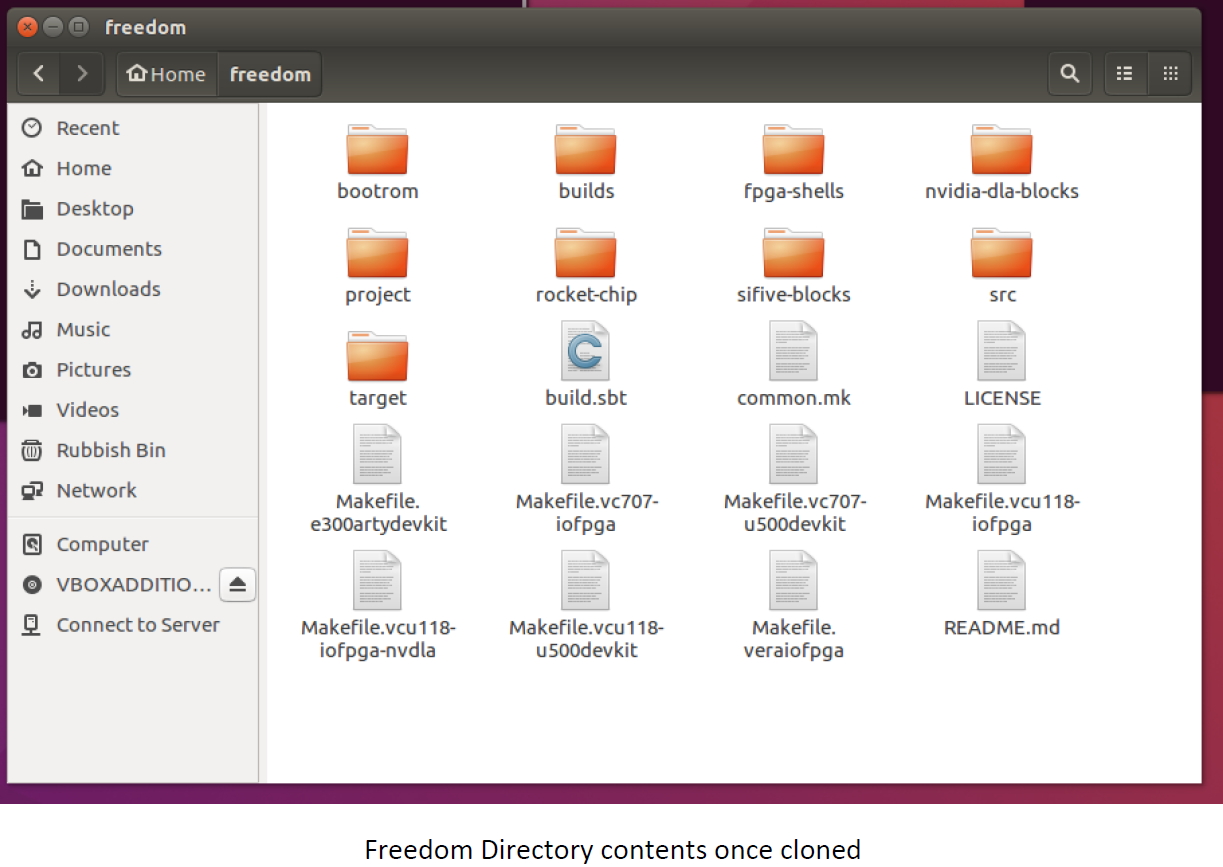 Within this directory, there are several Makefiles. This tutorial will be using the Makefile.e300artydevkit example. The example script will generate the RISC-V processor for both the Arty A7-35T and Arty A7-100T. The toolchain must be compiled first. In the terminal window, change the working directory to the toolchains directory within rocket-chip/riscv-tools and run the build.sh script. This will build the toolchain needed for generating the implementation files. To generate the Verilog instantiation of the processor from the Chisel HDL files, issue the following command:

Compiling the files will take a little time to complete. Generating generic Verilog files will allow either Arty A7-35T or Arty A7-100T to be targeted. 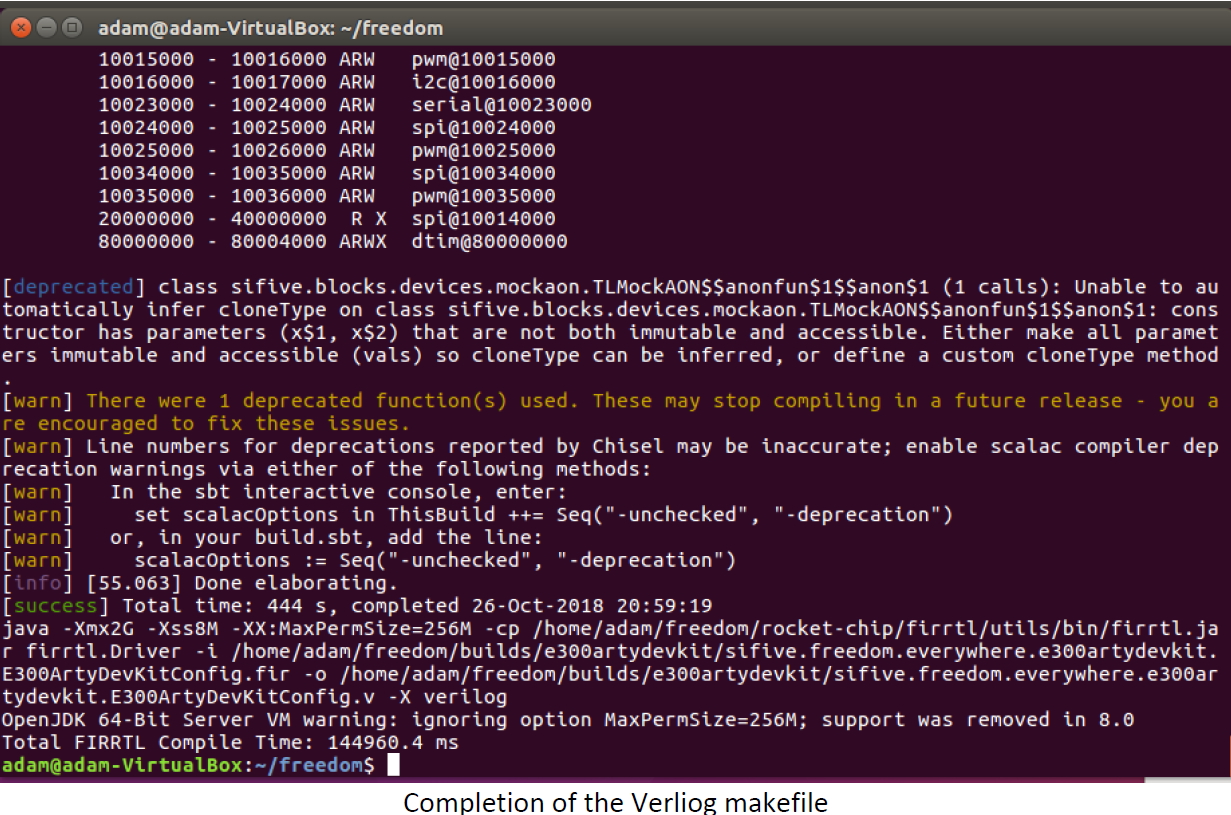 In the terminal window, the peripherals and their locations in the memory map can be seen. 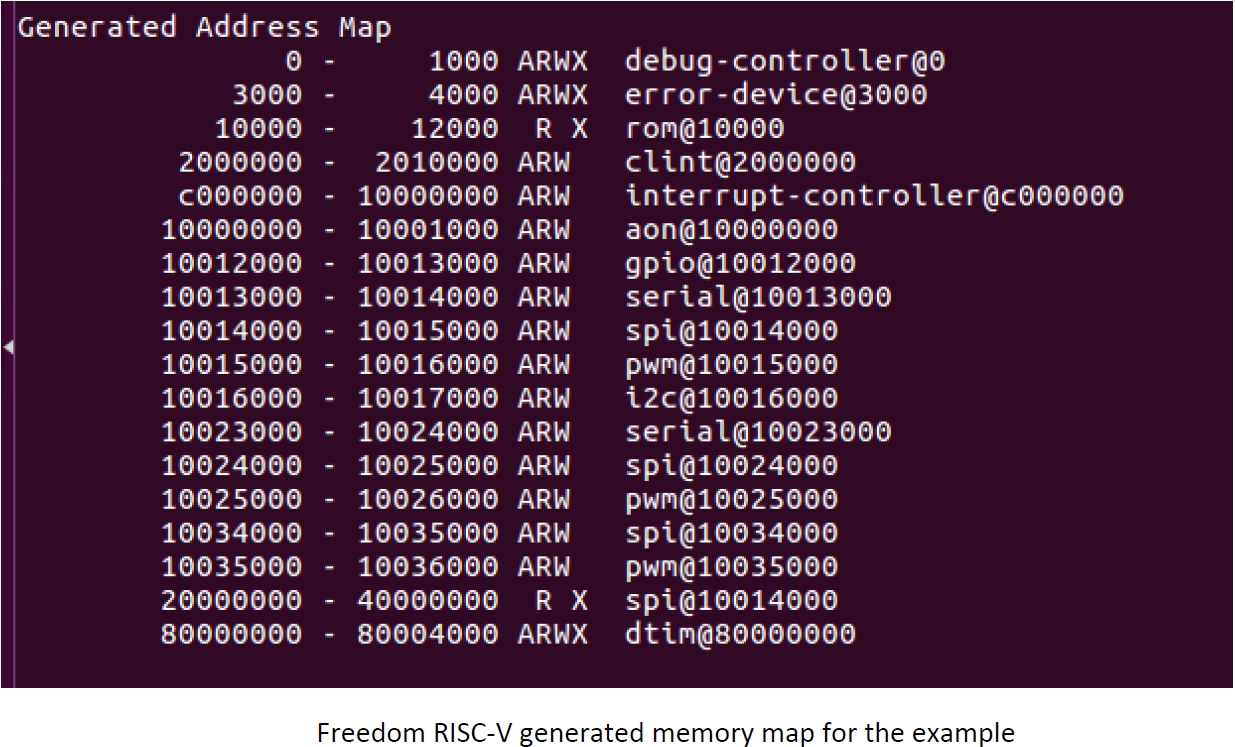 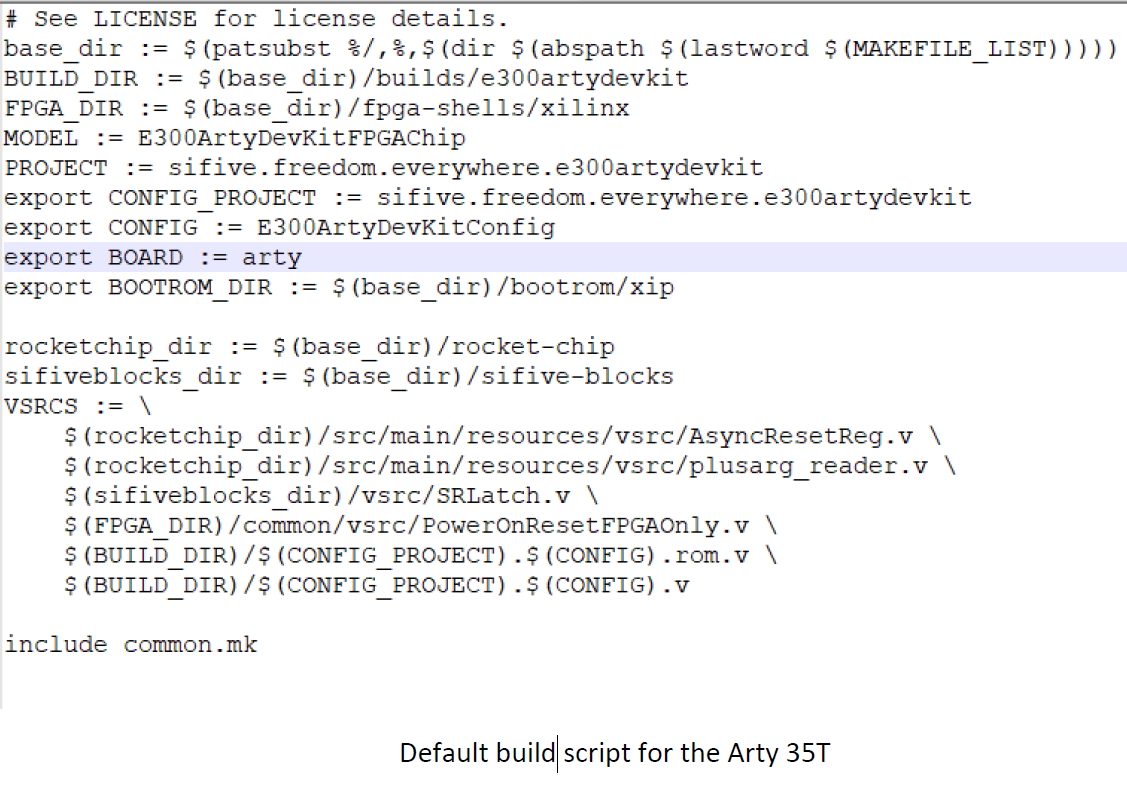 To generate an implementation for the Arty A7-100T, change the board type to arty_a7_100T. Open a file browser and navigate to the freedom/fpga-shells/Xilinx directory. Several folders, named for each supported development board, can be seen here. Note that the name of the arty_a7_100 folder matches the board type used. 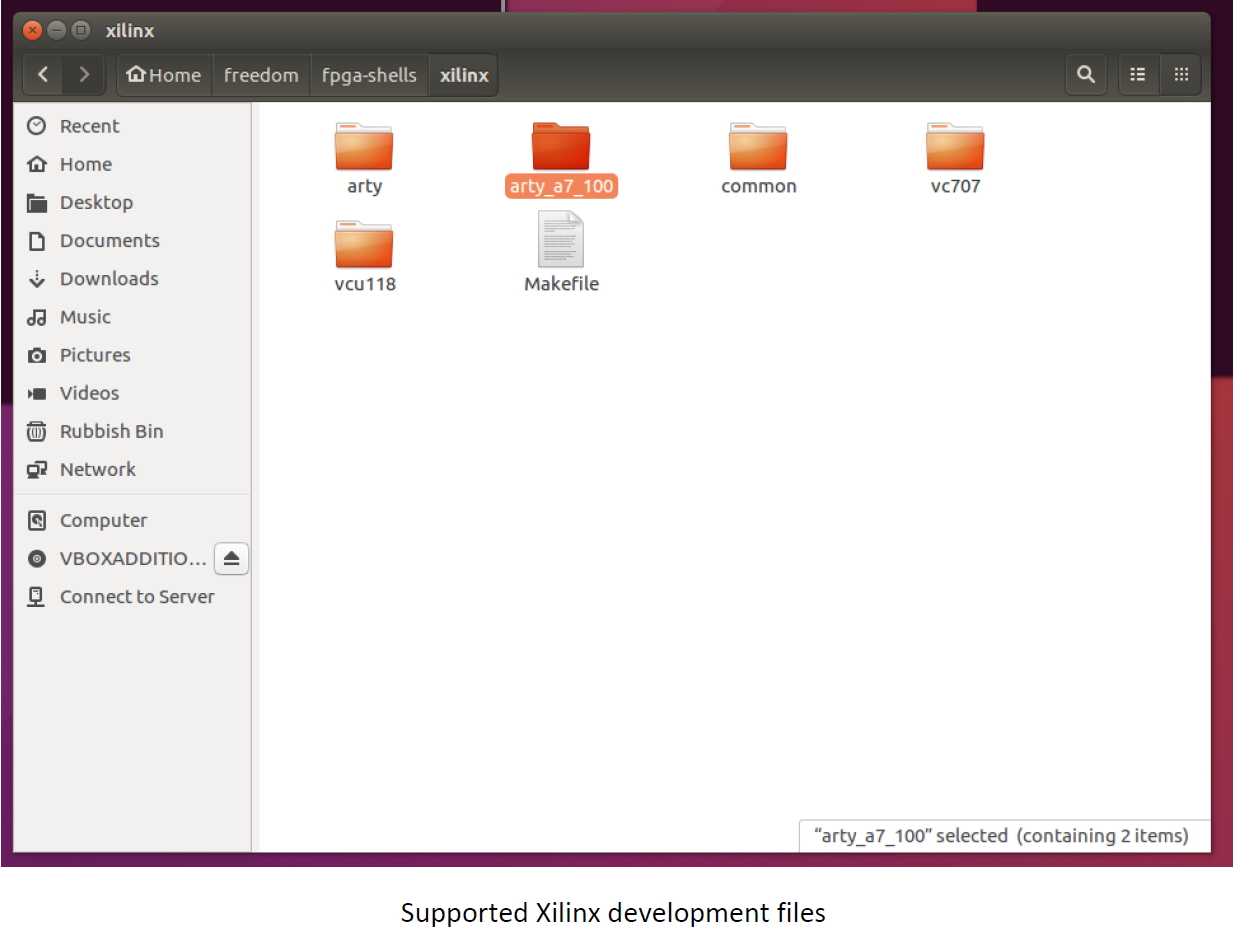 Back in the text editor with the Makefile, change the board name to the arty_a7_100.

Save and close the modified file. 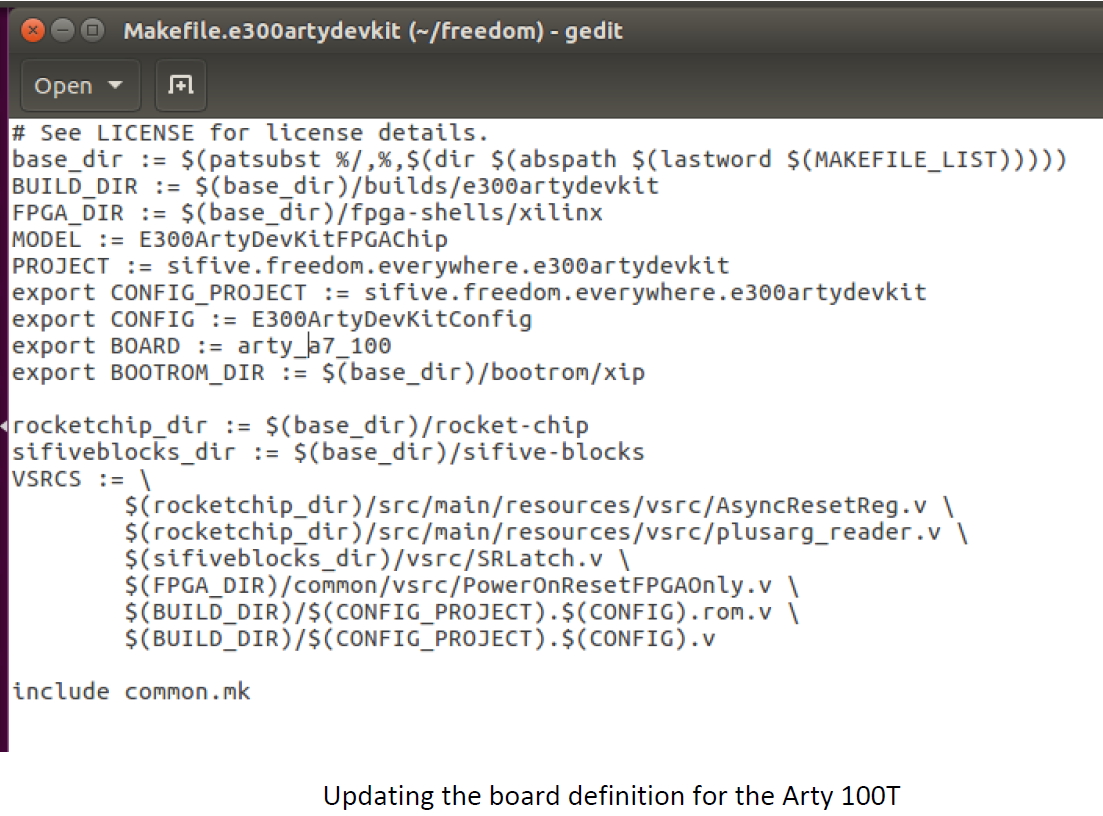 With that, the FPGA implementation can now be generated. In the terminal window issue the following command:

This will take time, as the script will use Vivado and the RISC-V toolchain to generate both a bitstream and an MCS file. The MCS file can be programmed into the flash memory on the Arty A7 100T and load the RISC-V processor when the board is powered on.

The output files will be available under the directory:

The BIT files, MCS files, and Vivado implementation reports can all be found here.

With the programming file available, the next step is to program the flash memory using Vivado.

Once the GUI starts, the next step is to connect the Arty A7-100T to the development machine via the micro USB port (J10), and to open Vivado's Hardware Manager. Once the board has been connected, the hardware tab on the left of the screen will show the FPGA device. Select the device, then right click on it and select *Add Configuration Memory Device*. This will open a dialog box where the memory type can be selected. The Arty A7-100T has a Spansion S25FL128xxxxx device fitted. 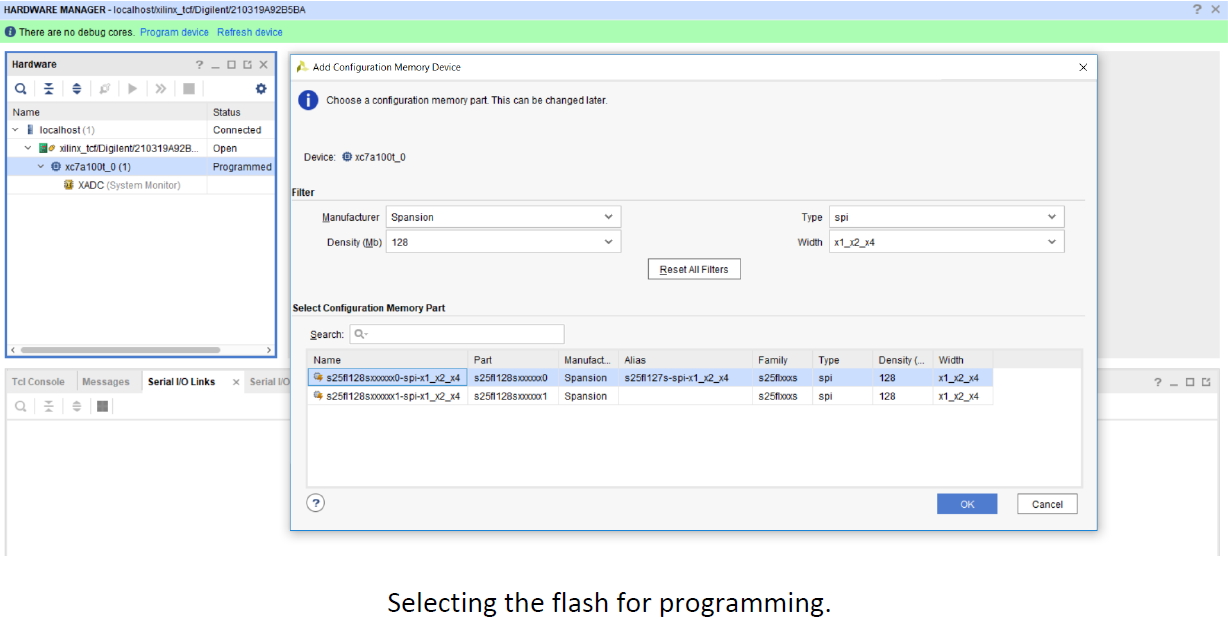 After selecting the device, a dialog prompt will ask whether the device should be programmed now. Click Yes and another dialog will open. 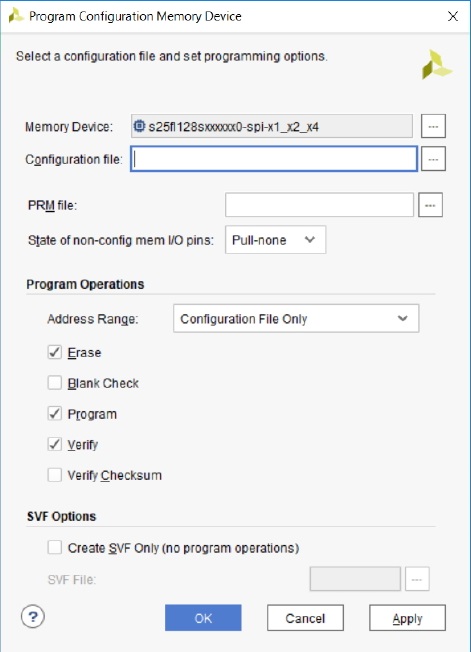 Select the generated MCS file, and the device will be programmed. Once this process is complete, the Arty A7-100T will be running the RISC-V processor. Check that the Arty A7's jumpers are configured so that it can be programmed from flash and press the reset button.

Confirm that the processor is running by doing the following:

However, a custom application still needs to be created and uploaded. This can be achieved by using the Arduino development environment.

First though, the Olimex JTAG pod needs to be connected to the Arty A7's Pmod Port D, allowing programs to be downloaded and debugged using the JTAG interface. The pin out between for connecting the two can be found here.

With that, a custom application can now be developed. The best way to get started programming the RISC-V is to use the Arduino development environment.

Installing support for the SiFive Freedom processor is easy. Under “File → Preferences”, point the Additional Boards Manager URL to the following URL: 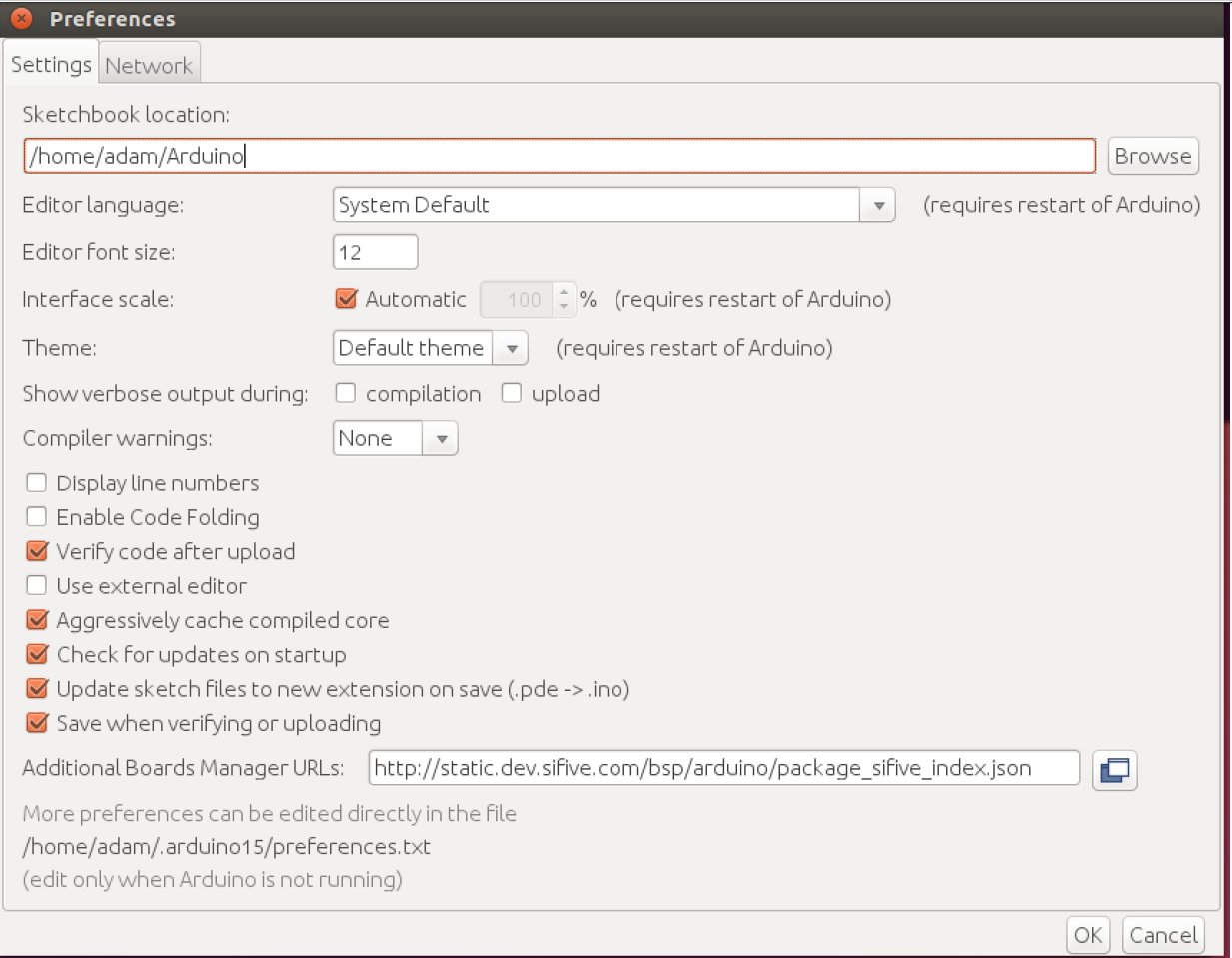 The next step is to install the board using the Board Manager found through the “Tools → Boards” menu.

In the Board Manager dialog, select the Contributed type to find the SiFive Freedom Boards. Once this is installed, applications can be developed, and examples applications loaded, just the same as for any other board in this environment. Just remember to select the Freedom Arty Dev Kit from the board selection list.

1. Ensure that the Xilinx cable drivers are installed. This can be achieved by first changing the directory to

Then running the command:

2. Ensure that the Olimex USB has the required permissions. Edit the following file:

By adding the following:

Save and enter the command sudo udevadm control –reload-rules

3. If problems occur while uploading, check the connections between the Olimex and Pmod Port D, and ensure that the user is a member of the plugdev group.

For more guides on how to use the Arty A7, visit the device's Resource Center.

For technical support, please visit the FPGA section of the Digilent Forums.