The Pmod VGA (Rev. C) provides a VGA port to any board with Pmod connectivity. The VGA port can be used to drive standard displays such as televisions and monitors. The host board must be capable of driving a fast parallel data bus in order to properly drive a display with the Pmod VGA. 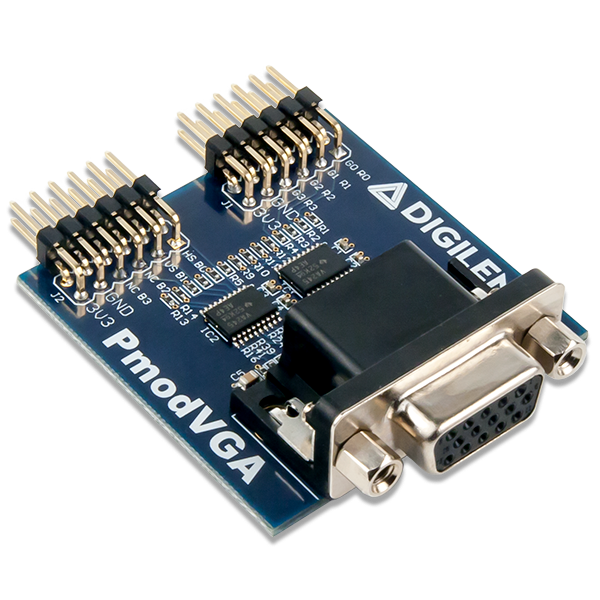 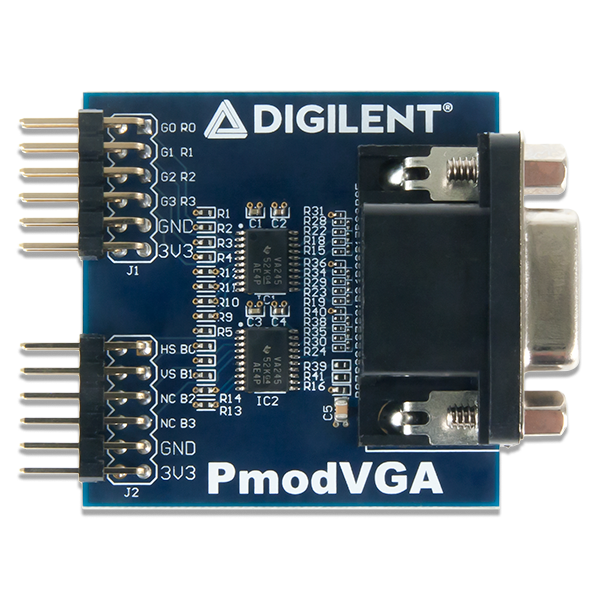 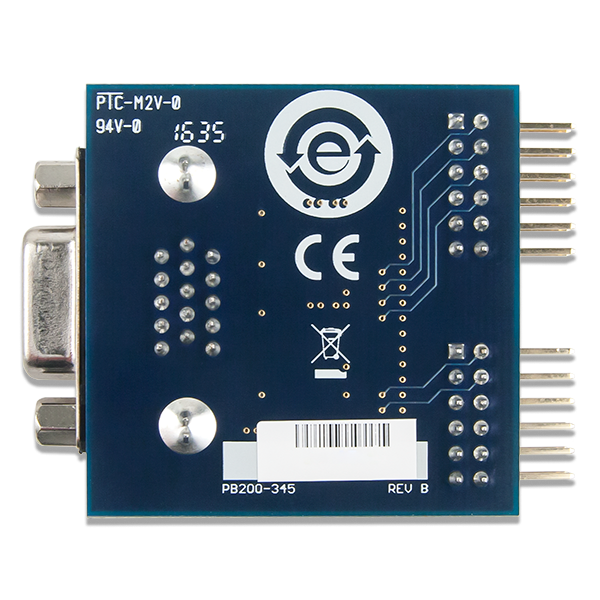 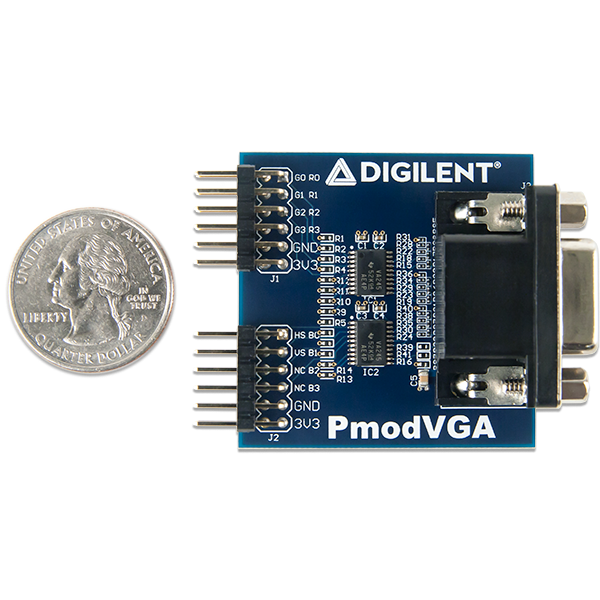 The Pmod VGA uses 14 input pins to create an analog VGA output port. This translates to 12-bit color depth and two standard sync signals: Horizontal Sync (HS) and Vertical Sync (VS). The digital-to-analog conversion is done using a simple R-2R resistor ladder. The ladder works in conjunction with the 75-ohm termination resistance of the VGA display to create 16 analog signal levels for the red, blue, and green VGA signals. This circuit produces video color signals that proceed in equal increments between 0V (fully off) and 0.7V (fully on). With 4 bits each for red, blue, and green, 4096 (16x16x16) different colors can be displayed, one for each unique 12-bit pattern.

When used with an FPGA host board, a video controller circuit must be created in programmable logic to drive the sync and color signals with the correct timing in order to produce a working display system. It may be possible to drive the video signals using a very fast microcontroller with a parallel bus controller; however, Digilent does not provide examples for this use case.

VGA signal timings are specified, published, copyrighted, and sold by the VESA organization (www.vesa.org). The following VGA system timing information is provided as an example of how a VGA monitor might be driven in 640 by 480 mode.

NOTE: For more precise information, or for information on other VGA frequencies, refer to documentation available at the VESA website. CRT-based VGA displays use amplitude-modulated moving electron beams (or cathode rays) to display information on a phosphor-coated screen. LCD displays use an array of switches that can impose a voltage across a small amount of liquid crystal, thereby changing light permittivity through the crystal on a pixel-by-pixel basis. Although the following description is limited to CRT displays, LCD displays have evolved to use the same signal timings as CRT displays (so the “signals” discussion below pertains to both CRTs and LCDs). Color CRT displays use three electron beams (one for red, one for blue, and one for green) to energize the phosphor that coats the inner side of the display end of a cathode ray tube (see Fig. 1). 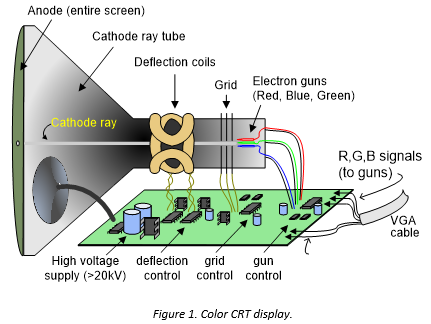 Electron beams emanate from “electron guns,” which are finely-pointed heated cathodes placed in close proximity to a positively charged annular plate called a “grid.” The electrostatic force imposed by the grid pulls rays of energized electrons from the cathodes, and those rays are fed by the current that flows into the cathodes. These particle rays are initially accelerated towards the grid, but they soon fall under the influence of the much larger electrostatic force that results from the entire phosphor-coated display surface of the CRT being charged to 20kV (or more). The rays are focused to a fine beam as they pass through the center of the grids, and then they accelerate to impact on the phosphor-coated display surface. The phosphor surface glows brightly at the impact point, and it continues to glow for several hundred microseconds after the beam is removed. The larger the current fed into the cathode, the brighter the phosphor will glow.

Modern VGA displays can accommodate different resolutions, and a VGA controller circuit dictates the resolution by producing timing signals to control the raster patterns. The controller must produce synchronizing pulses at 3.3V to set the frequency at which current flows through the deflection coils, and it must ensure that video data is applied to the electron guns at the correct time. Raster video displays define a number of “rows” that corresponds to the number of horizontal passes the cathode makes over the display area, and a number of “columns” that corresponds to an area on each row that is assigned to one “picture element”, or pixel. Typical displays use from 240 to 1200 rows and from 320 to 1600 columns. The overall size of a display and the number of rows and columns determines the size of each pixel. 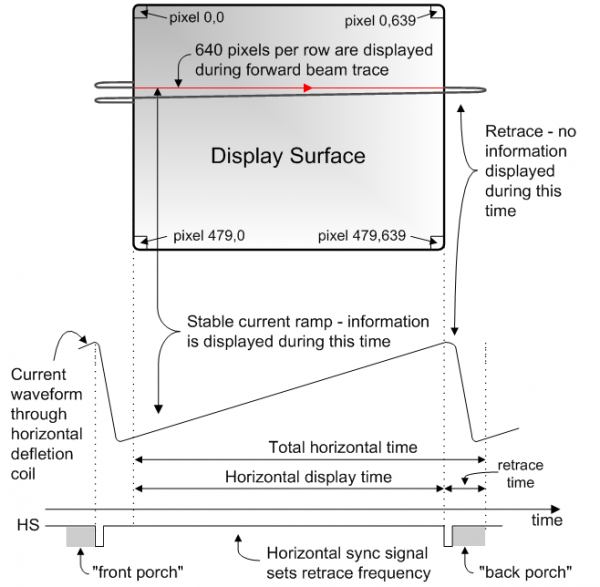 Video data typically comes from a video refresh memory with one or more bytes assigned to each pixel location (the Pmod VGA uses 12 bits per pixel). The controller must index into video memory as the beams move across the display, and retrieve and apply video data to the display at precisely the time the electron beam is moving across a given pixel.

A VGA controller circuit must generate the HS and VS timings signals and coordinate the delivery of video data based on the pixel clock. The pixel clock defines the time available to display one pixel of information. The VS signal defines the “refresh” frequency of the display, or the frequency at which all information on the display is redrawn. The minimum refresh frequency is a function of the display’s phosphor and electron beam intensity, with practical refresh frequencies falling in the 50Hz to 120Hz range. The number of lines to be displayed at a given refresh frequency defines the horizontal “retrace” frequency. For a 640-pixel by 480-row display using a 25MHz pixel clock and 60 +/-1Hz refresh, the signal timings shown in Fig. 3 can be derived. Timings for sync pulse-width and front and back porch intervals (porch intervals are the pre- and post-sync pulse times during which information cannot be displayed) are based on observations taken from actual VGA displays. 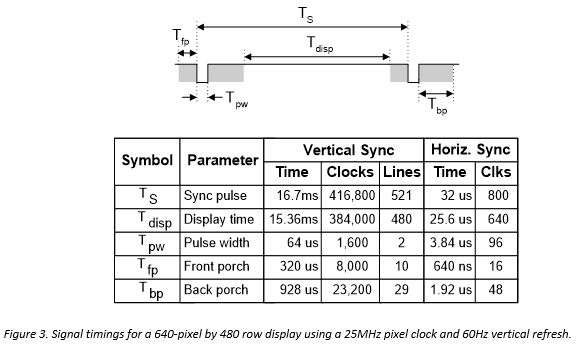 A VGA controller circuit, such as the one diagrammed in Fig. 4, decodes the output of a horizontal-sync counter driven by the pixel clock to generate HS signal timings. You can use this counter to locate any pixel location on a given row. Likewise, the output of a vertical-sync counter that increments with each HS pulse can be used to generate VS signal timings, and you can use this counter to locate any given row. These two continually running counters can be used to form an address into video RAM. No time relationship between the onset of the HS pulse and the onset of the VS pulse is specified, so you can arrange the counters to easily form video RAM addresses, or to minimize decoding logic for sync pulse generation.

The schematics of the Pmod VGA are available here. Additional information about the transceiver used including voltage levels and specific timings of the chip can be found by checking out its datasheet here.

Example code demonstrating how to get information from the Pmod VGA can be found on its Resource Center here.

If you have any questions or comments about the Pmod VGA, feel free to post them under the appropriate section (“Add-on Boards”) of the Digilent Forum.