The Digilent Pmod TC1 (Revision A) is a cold-junction thermocouple-to-digital converter module designed for a classic K-Type thermocouple wire. With Maxim Integrated's MAX31855, this module reports the measured temperature in 14-bits with 0.25°C resolution. 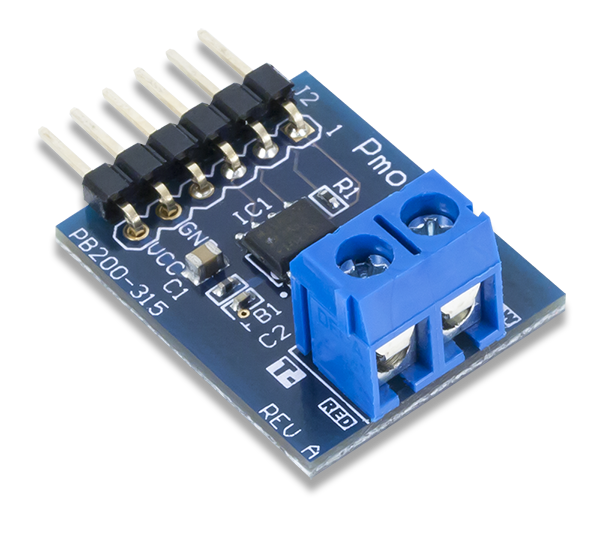 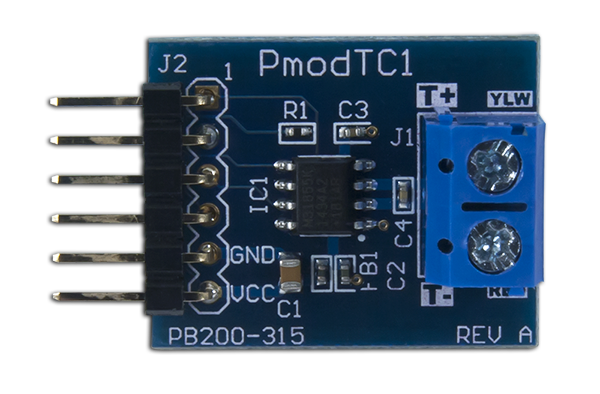 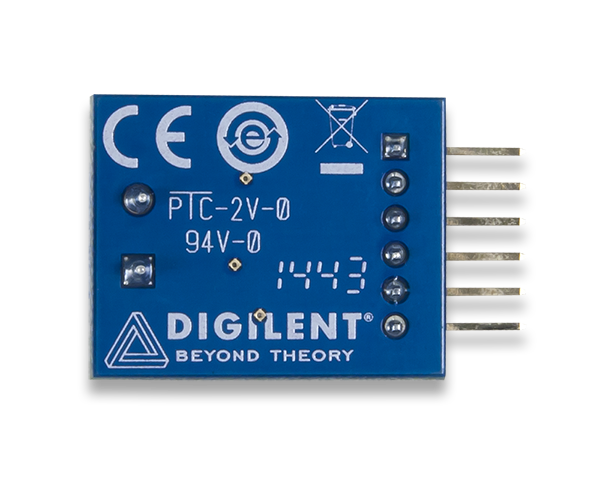 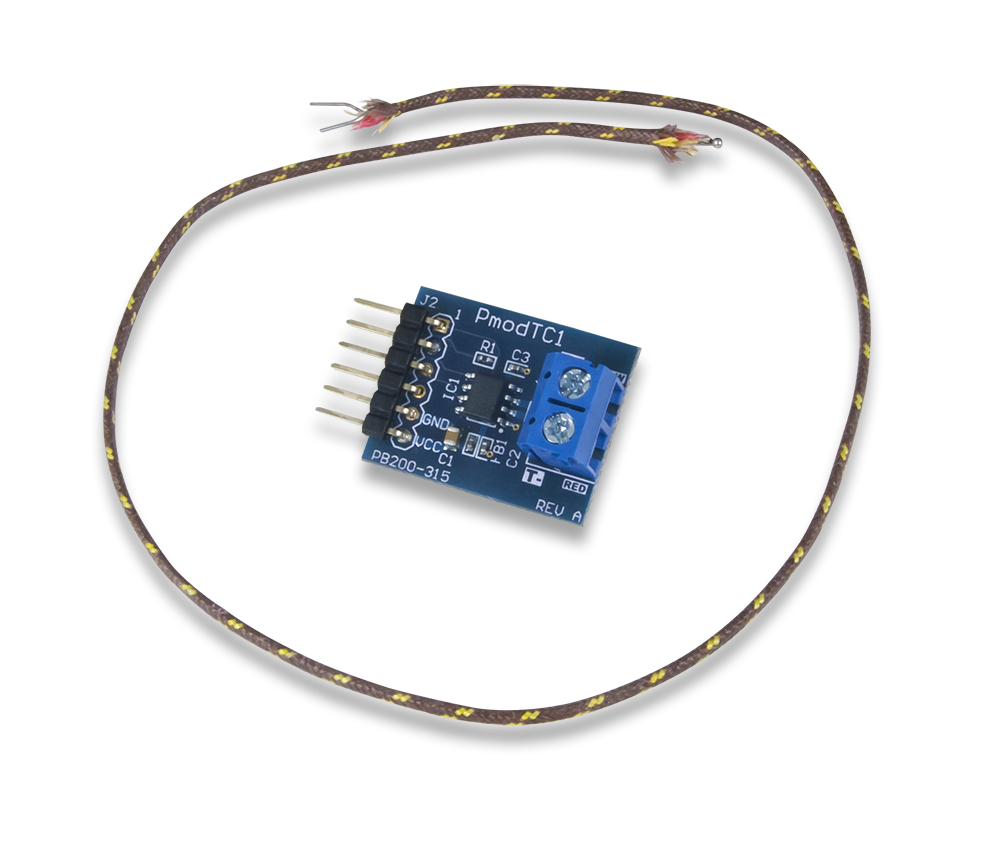 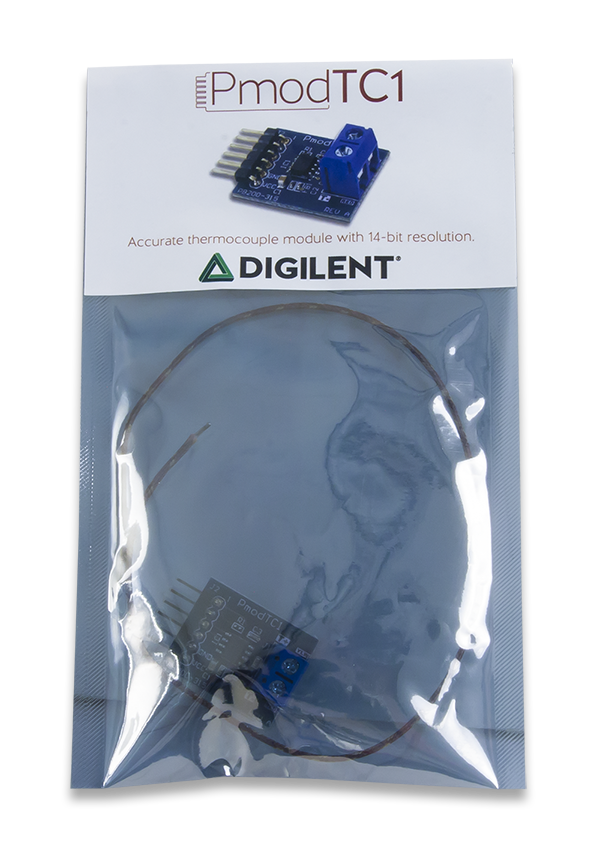 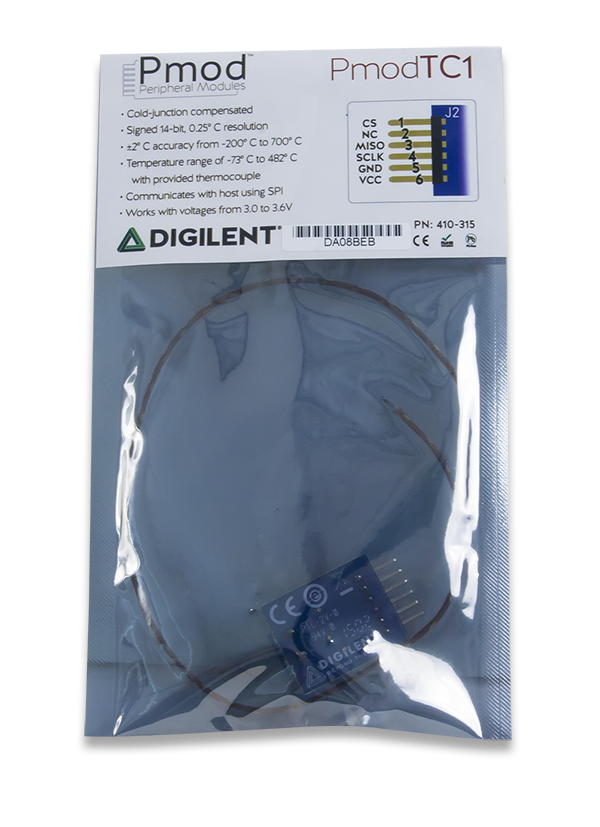 A thermocouple wire needs to be attached onto the screw terminal. The polarity of the thermocouple matters, therefore it is required to have the wire screwed down in the correct orientation for accurate temperature readings. The Pmod TC1 has designated silk screen to aid you in matching the polarity of the wire. The wire is made up of two wires twisted around eachother wrapped with a thermal resistant thread. Locate the end of the wire, untwist and you should see a red and a yellow colors at the base of the thread. These colors match the silk screening, RED and YELLOW on the Pmod TC1 screw terminals. The device measures the difference in temperature between the two ends of the thermocouple wire, of which one is the internal temperature and serves as the reference junction. Once a temperature reading is established, the data passes onto a 14-bit ADC and is then passed out through SPI.

To read data, the system board drives the slave select (SS) pin low and drives a clock to the slave device, the Pmod TC1. The first bit (and the sign bit) of the 14-bits of temperature data is loaded onto the Master-In-Slave-Out (MISO) line on the falling edge of the Chip Select (CS) and can be read by the host board on the rising edge of the Serial Clock (SCLK) line. Similarly, each consecutive bit of data, starting with the most significant bit (MSB), are placed onto the data line on each falling edge of SCLK and is read on the subsequent rising edge of SCLK. Users can choose to stop reading information from the Pmod TC1 by driving the CS line high.

The remaining bits of data not associated with the temperatures consist of a reserved bit that always reads low (bit 17) and a fault bit that reads high when one of the fault indicators (bits 2, 1, or 0) are reporting a fault. The faults refer to an issue detected with the thermocouple, such as a short. A table illustrating the 32 bits of information that would be received by the host board is provided below:

Two tables (Tables 4 and 5 from the MAX31855 datasheet) are provided below to show the temperature that corresponds to the two's complement bit values received by the host board:

The on-board chip on the Pmod TC1 requires at least 200 ms to power up before being able to conduct accurate temperature readings and each temperature conversion takes up 100 ms to complete. Any external power applied to the Pmod TC1 must be within 3.0V and 3.6V; it is recommended that Pmod is operated at 3.3V.

The schematics of the Pmod TC1 are available here. Additional information about the Thermocouple-to-digital converter including specific timings of the chip can be found by checking out its datasheet here.

Example code demonstrating how to get information from the Pmod TC1 can be found here.

If you have any questions or comments about the Pmod TC1, feel free to post them under the appropriate section (“Add-on Boards”) of the Digilent Forum.