The Digilent Pmod I2S2 (Revision A) features a Cirrus CS5343 Multi-Bit Audio A/D Converter and a Cirrus CS4344 Stereo D/A Converter, each connected to one of two audio jacks. These circuits allow a system board to transmit and receive stereo audio signals via the I2S protocol. The Pmod I2S2 supports 24 bit resolution per channel at input sample rates up to 108 kHz and output sample rates up to 200 kHz. 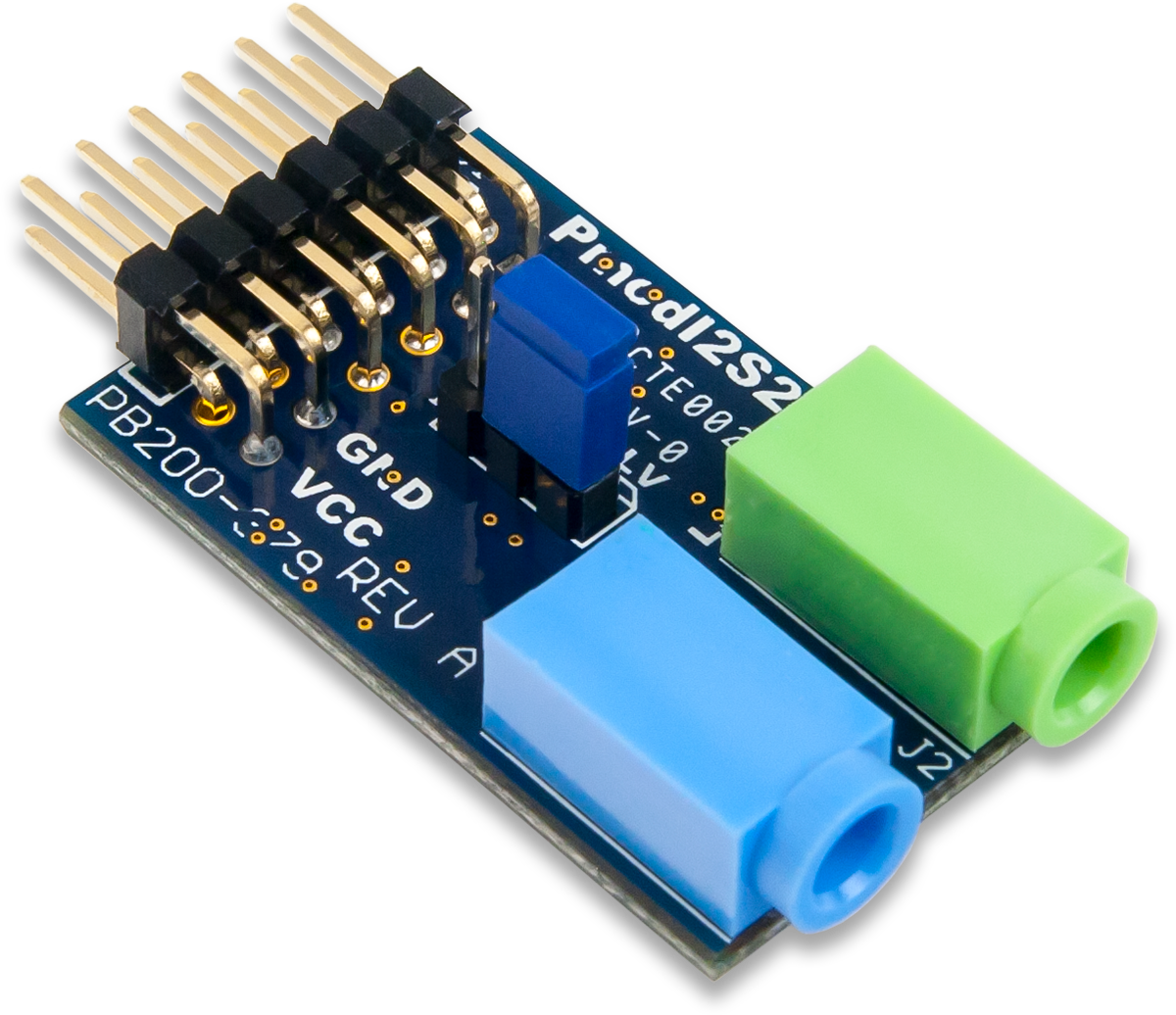 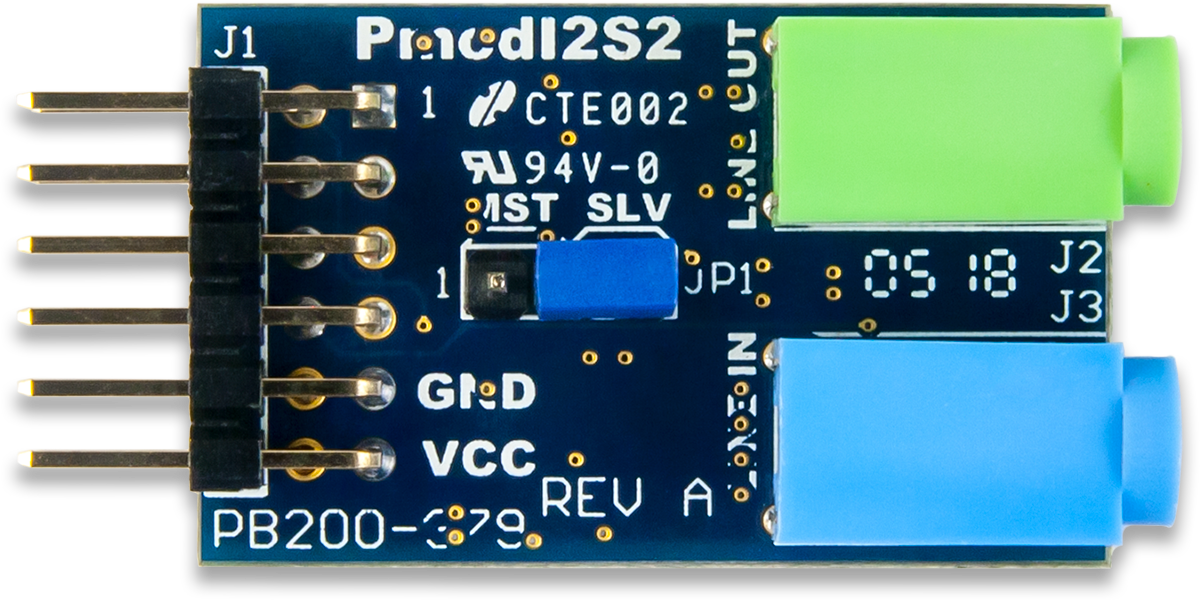 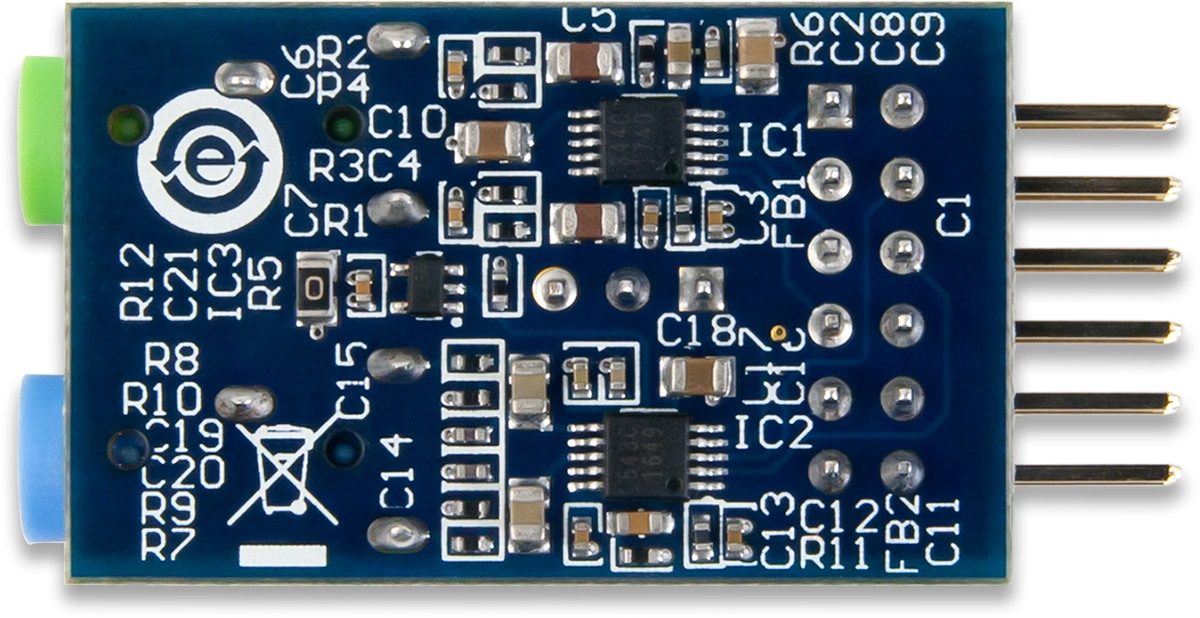 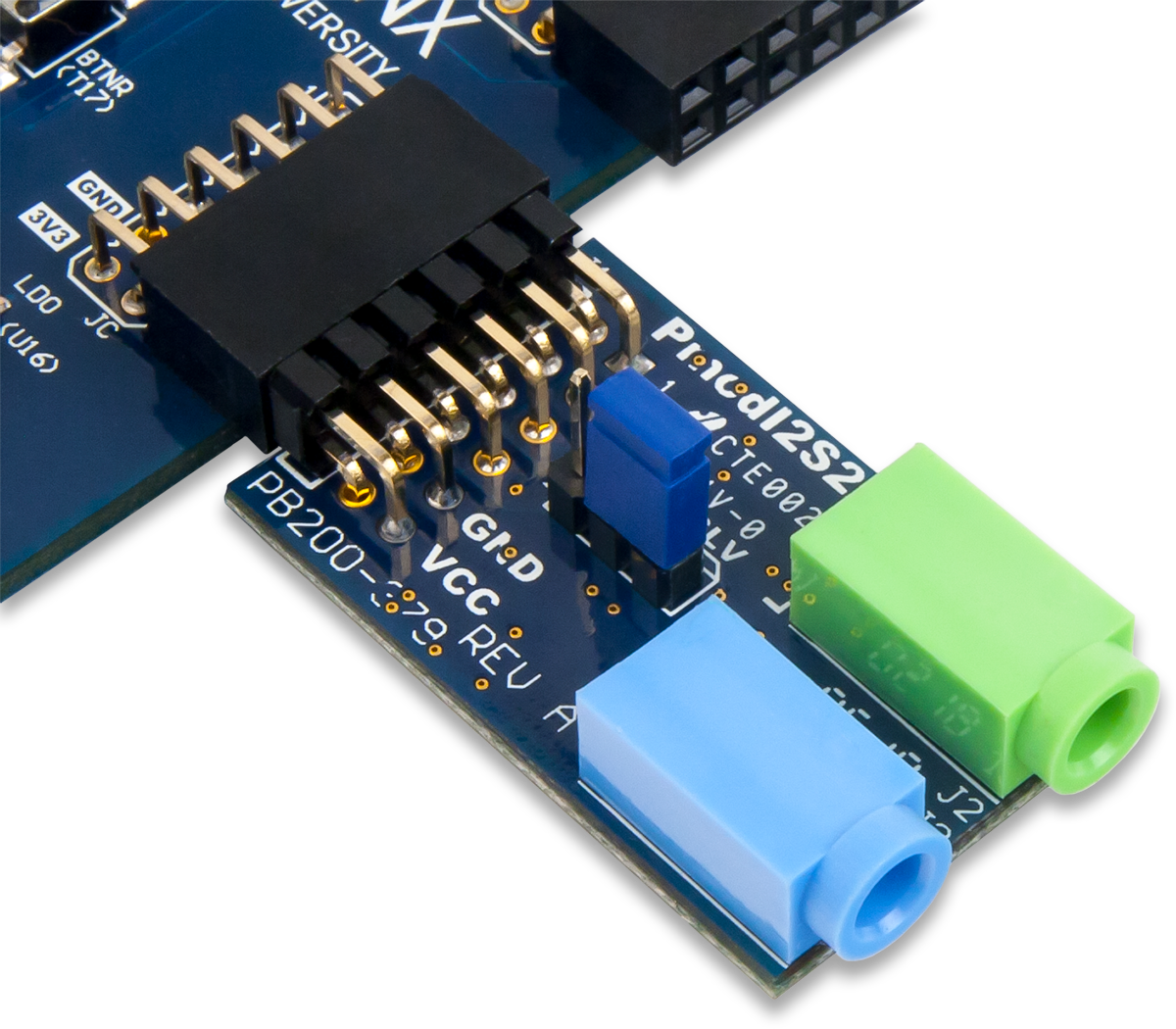 The two primary integrated circuits of the Pmod I2S2 communicate with the host board via the (GPIO protocol). As each IC uses the Integrated Interchip Sound (I2S) protocol, several different clock lines are required, as described (below).

Any external power applied to the Pmod I2S must be within 3 V and 5.25 V; however, it is recommended that Pmod is operated at 3.3 V. Digital logic levels must correspond to the power supply voltage.

The fastest clock signal of each I2S interface will be the Master Clock (MCLK); as the name implies, this signal will keep everything nicely synchronized. The Left-Right Clock (LRCK), also known as the Word Select Clock, indicates whether a particular set of data is associated with the left or right audio channel for stereo sound.

The final clock is the Serial Clock (SCLK), also known as the Bit Clock. The line-in and line-out converters can each either be provided this clock signal, or generate it internally. More information on how the serial clocks for each converter can be found (below).

NOTE: The term “I2S input/output sample rate” refers to the frequency that a full frame of data, consisting of both the left and right channels, is transmitted over an I2S interface.

An example timing diagram of a single I2S frame is shown below.

The line-out converter will internally derive its SCLK if it is provided at least two consecutive frames of the LRCK without providing any SCLK signals. In this case, the line-out converter will measure the MCLK and LRCK rates and determine an appropriate SCLK rate. However, the MCLK/LRCK ratio must meet one of several specific ratios in order to properly generate SCLK, as outlined in the table below from the CS4344 datasheet.

The ratio between the MCLK and LRCK rates must be an integer ratio so that the line-out converter's internal clock dividers can determine an appropriate bit rate. A table of commonly used sample rates and their corresponding MCLK rates, from the CS4344 datasheet, is provided below.

The line-in converter can be placed in either Master Mode or Slave Mode by setting mode jumper JP1 to the corresponding position. The position of this jumper should not be changed while the Pmod I2S2 is powered on.

In Slave Mode, LRCK and SCLK must be generated by the host board. Supported sample rate ranges and their corresponding MCLK/LRCK and SCLK/LRCK ratios are provided in the table below from the CS5343 datasheet. The line-in converter automatically selects as needed from single- and double-speed modes.

Note: The CS5343's Double-Speed Mode is not available in Master Mode on the Pmod I2S2.

A table of common MCLK frequencies, for both Master and Slave Modes, with their corresponding MCLK/LRCK ratios and audio sample rates, from the CS5343 datasheet, is provided below.

To set up a simple 44.1 kHz audio passthrough, three control signals need to be generated by the host system board.

2. A serial clock (SCLK), which fully toggles once per 8 MCLK periods.

3. A Left/Right Word Select signal, which fully toggles once per 64 SCLK periods.

The Pmod I2S2's Master/Slave select jumper (JP1) should be placed into the Slave (SLV) position.

Each of these control signals should be provided to the appropriate pin on both the top and bottom rows of the Pmod I2S2.

The ADOUT_SDIN pin should be driven by the ADIN_SDOUT signal.

See the I2S Overview section for more information on the timing of these signals.

The schematics of the Pmod I2S2 are available here. Additional information about the line-in and line-out converters (CS5343 and CS4344, respectively) including master/slave modes and specific timings of the chips can be found by checking out their datasheets here: CS5343, CS4344.

If you have any questions or comments about the Pmod I2S2, feel free to post them under the appropriate section (“Add-on Boards”) of the Digilent Forum.