The Digilent Pmod HYGRO (Revision A) is a relative humidity sensor with an integrated temperature sensor for highly accurate measurements at low power. With the TI HDC1080, you can determine the relative humidity of the environment with up to 14 bits of resolution. 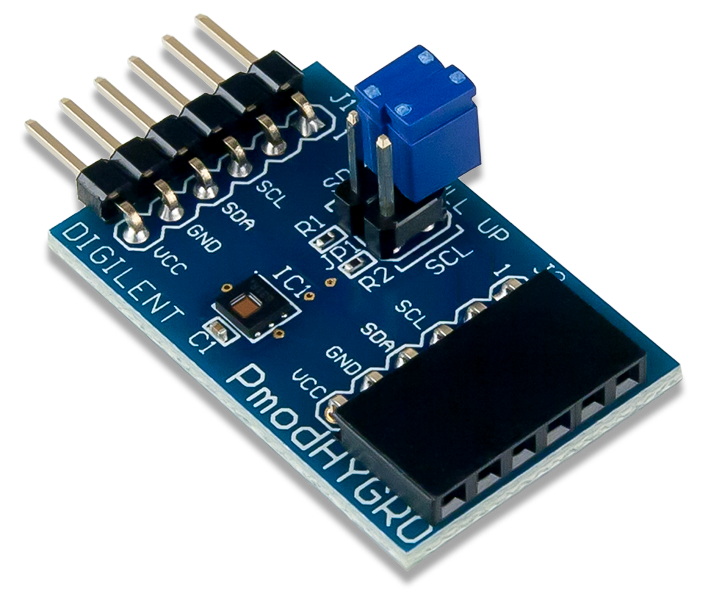 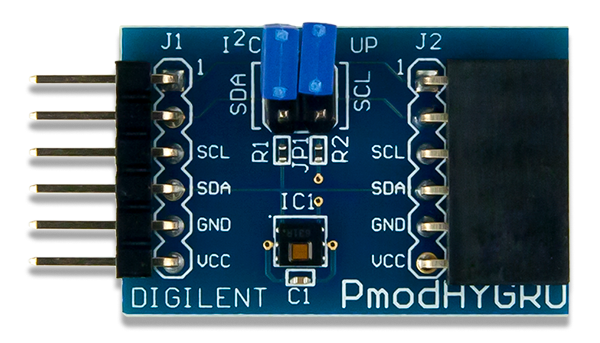 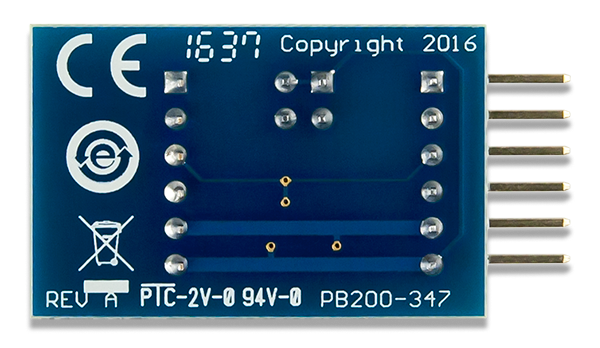 The Pmod HYGRO is designed to digitally report the relative humidity and ambient temperature upon request by the host board. Up to 14-bits of resolution for each sensor may be collected by allowing for longer conversion times. A resistive heating element can be enabled to test the sensor or drive off condensation that accumulates on the sensor after being consistently exposed to high humidity conditions.

The Pmod HYGRO communicates with the host board via the I²C protocol. By first sending the 7-bit I²C address of 1000000 (0x40) and then a read/write bit (high/low logic level, respectively), followed by the register address of interest at a maximum clock frequency of 400 kHz, users can both configure and read from the Pmod HYGRO. Header J2 on the Pmod HYGRO passes through all of the signals present on the main Header J1 to allow for the daisy chaining of multiple I²C compatible modules.

The Configuration register (address 0x02) allows users to control the resolution of the temperature and humidity measurements, change the acquisition mode, enable the heater, and more. A table of the 16-bit register, recreated from Table 4 in the HDC1080 datasheet, is provided below.

¹ – This is the default value on power-up or reset

The temperature register (address 0x00) and the humidity register (address 0x01) are both 16-bit read only registers with the 14 MSBs corresponding to the 14-bit maximum resolution for both sensors. The two LSBs (bits D1 and D0) are always 0 for both registers. As the measurement resolution increases, the corresponding conversion time for each sensor also increases. A table of typical conversion times from Section 7.5 (Electrical Characteristics) of the HDC1080 datasheet, is provided below.

Upon device power-up, the Pmod HYGRO requires at least 15 ms prior to being able to perform a measurement. To perform a measurement, users need to configure (or accept) the measurement settings in the Configuration Register, and then trigger the measurement(s) by sending an I²C write transaction along with the address pointer set to the appropriate register. After waiting the appropriate conversion times, users may then perform a read transaction, taking advantage of the auto-incrementing pointer address for reading both the temperature and humidity registers. After the data has been read, users need to wait at least one full second before performing another read transaction to avoid internal heating of the sensor and the distortion of the measured temperature and humidity levels.

Note that if a write transaction is performed on either the temperature (address 0x00) or humidity (address 0x01) registers during a conversion, the current conversion will be aborted and a new one started. If a read is performed during a conversion, the Pmod HYGRO will respond back with a NACK indicating the measurement result is not yet available. The typical time that it takes the output of the humidity sensor to show 63% of a step change in humidity is 15 seconds.

Here is the series of commands to acquire relative humidity and temperature data from the Pmod HYGRO in pseudo I²C code.

The Pmod HYGRO is an ideal Pmod to use in long term humidity test application. As a very low power Pmod between measurements, long term data to measure humidity changes in an environment can easily be collected.

Any external power applied to the Pmod HYGRO must be within 2.7 V and 5.5 V to ensure that the on-board chips operate correctly; however, it is recommended that Pmod is operated at 3.3 V.

A sample timing diagram for writing to and reading from the Pmod HYGRO taken from the HDC1080 datasheet are provided below:

Example write to the Pmod HYGRO

Example reading from the Pmod HYGRO

The schematics of the Pmod HYGRO are available here. Additional information about the humidity sensor including communication modes and specific timings of the chip can be found by checking out its datasheet here.

If you have any questions or comments about the Pmod HYGRO, feel free to post them under the appropriate section (“Add-on Boards”) of the Digilent Forum.