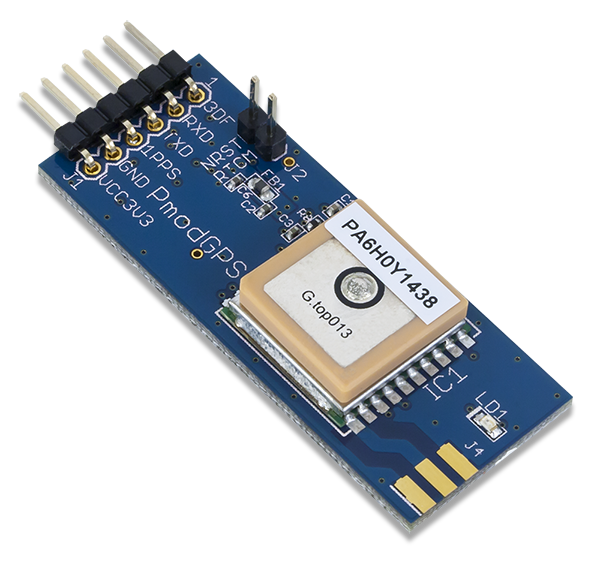 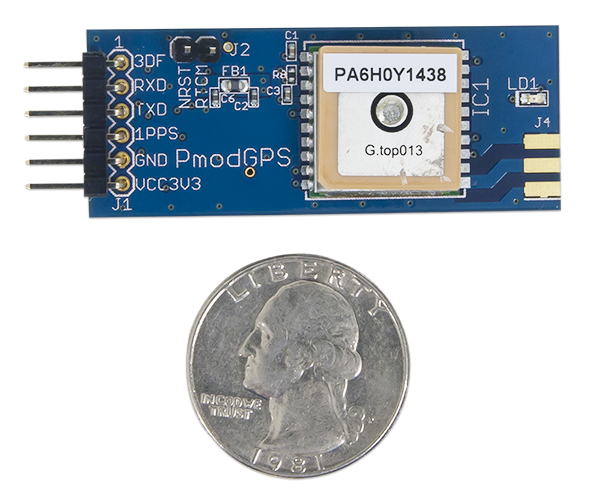 The Pmod GPS communicates with the host board via the UART protocol. By default, the interface operates at a baud rate of 9600 baud, with 8 data bits, no parity, and with a single stop bit.

The reset pin (NRST) present on J2 allows normal operation of the module while left floating. If users bring the NRST pin or toggle the pin, it will completely reset the module, similar to how a power cycle operation would perform.

On J1, the 1 PPS pin provides a one pulse-per-second output that is synchronized with the internal GPS time, indicating the beginning of each new second. The timing diagram for the PPS pin is shown below.

The 3DF pin on J1 indicates the status of the user's positional fix. When the module has a constant fix (2D or 3D) this pin stays low; if the module is unable to get a fix then the pin will toggle every second. The on-board LED follows this same behavior pattern to provide a a visual representation.

On the underside of the Pmod, the coin cell battery stores the last satellite information allowing users to perform a hot start or warm start of the GPS rather than having to wait for the GPS to re-find all of the satellites.

Once all of the satellites have been found, the module will send NMEA messages to the user over UART at a default rate of 1 Hz.

Here are links to websites listing various commands or things that the Pmod GPS will receive and then send to the system board– here and here.

The Pmod GPS reports to the host board when it receives data from the satellites.

Any external power applied to the Pmod GPS must be within 2.7V and 5.25V; however, it is recommended that Pmod is operated at 3.3V.

The schematics of the Pmod GPS are available here. Additional information about the MediaTek GPS MT3329 including communication modes and specific timings of the chip can be found by checking out its datasheet here.

Example code demonstrating how to get information from the Pmod GPS can be found here.

If you have any questions or comments about the Pmod GPS, feel free to post them under the appropriate section (“Add-on Boards”) of the Digilent Forum.