The Digilent Pmod BLE (Revision A) is a powerful peripheral module meant for use with any UART enabled development board. This Pmod employs the Roving Networks RN4871 to create a fully integrated Bluetooth Low Energy interface. This chip features an onboard Bluetooth stack that makes connecting and communicating with any Bluetooth 4.0+ device possible through simple UART commands. The RN4871 also features four built in GATT services: Device Information, Airpatch, BeaconThings, and UART Transparent data streaming. It also allows up to five custom public services and up to 4 custom private services, each allowing up to eight custom characteristics. The PmodBLE is a cheap, versatile, low energy addition to the wireless Pmod library. 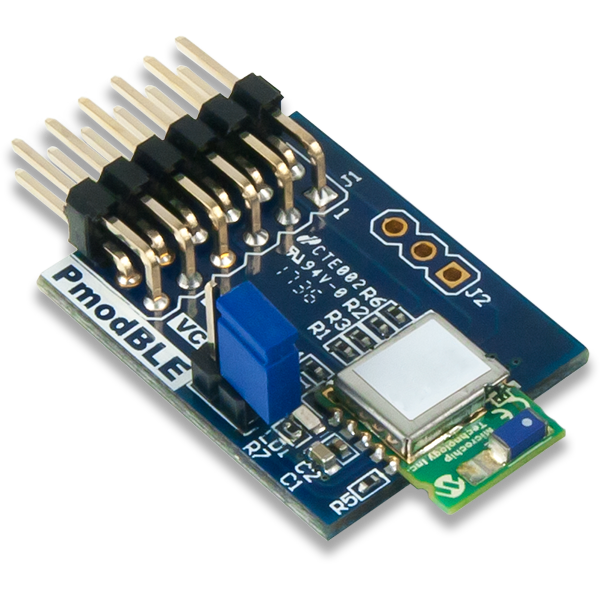 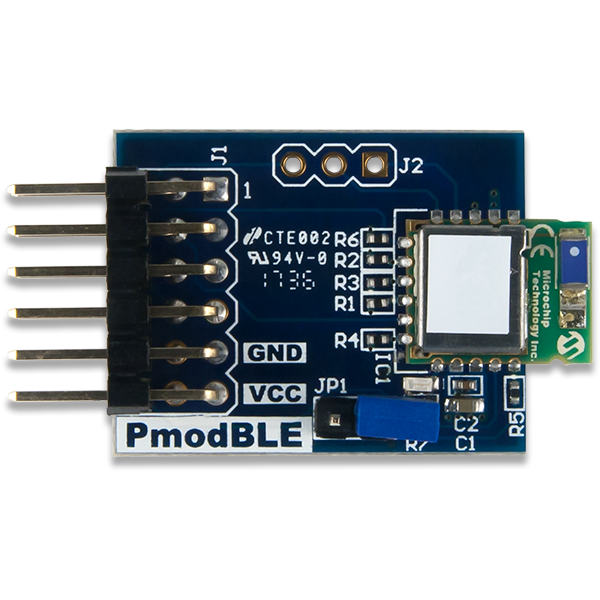 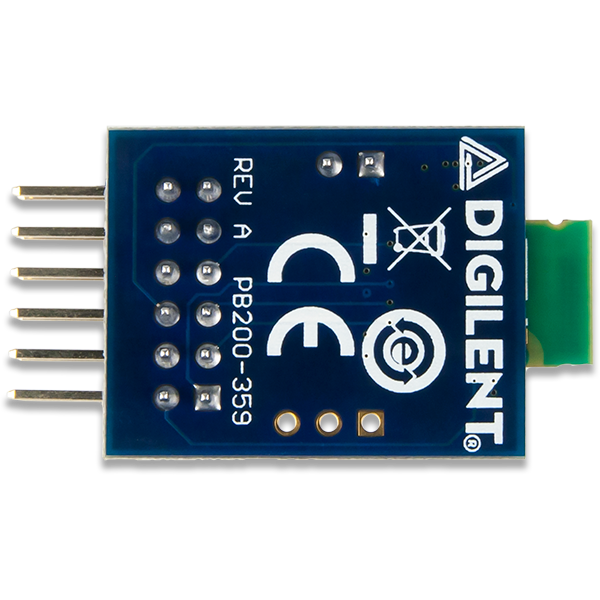 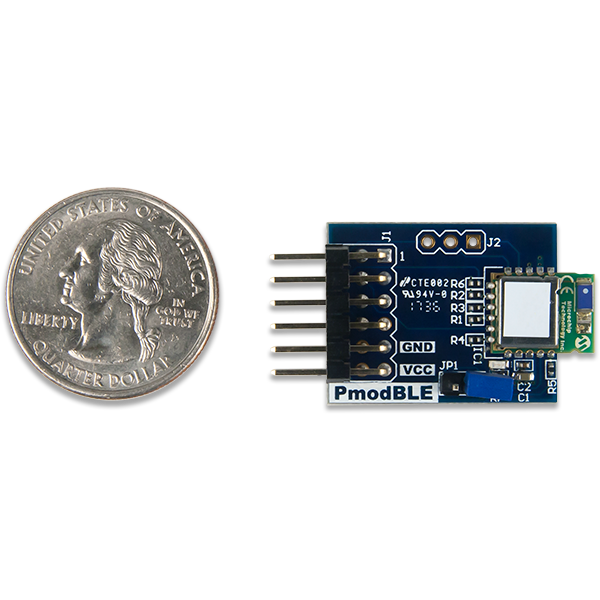 The Pmod BLE has one jumper connected to the MODE pin. When left unshorted, the PmodBLE will start up in standard application mode. When shorted and power cycled, the board will go into test mode, which is used to update the firmware on the RN4871. There is also an unloaded jumper J2 which provides access to 3 configurable pins P1_3, P1_7, and P2_7.

The Pmod BLE uses a 12-pin Pmod port and communicates via UART on the top row of pins. The bottom row of pins include 2 GPIO pins, a reset pin, and a mode pin that is used to update the firmware of the BLE module.

The typical application for the Pmod BLE is to replace a wired UART connection between two Bluetooth capable devices. When paired with an Android, Linux, Mac OS X, or Windows computer, the Pmod BLE behaves like a serial port similar to how a USB-UART bridge or RS-232 serial port behaves. The Pmod BLE can be easily configured from the Bluetooth connected computer by entering a “Command Mode” that allows settings such as UART baud rate to be programmed into non-volatile configuration registers.

When used with another Pmod BLE, a wireless UART bridge can be achieved with no need for software configuration of the Bluetooth link. This is accomplished by entering a command mode while connected to the PmodBLE through UART. Once in command mode, the device can connect to any BLE address using the “C,0,<address>” command. In this way you can communicate wirelessly between two embedded devices without complicated software like is required with WiFi or 802.15.4 solutions. Communicate wirelessly with simple serial prints and reads!

WARNING: Hot-plugging (un-plugging or plugging in the device while powered) the Pmod BLE can possibly wipe the internal memory on the device. Fixing this requires a UART terminal connection between a PC and the Pmod BLE.

The Pmod BLE communicates with the host board via the UART protocol. By default, the UART interface uses a baud rate of 115.2 kbps, 8 data bits, no parity, and a single stop bit. The startup baud rate may be customized to predefined rates or set to a specific user customized baud rate ranging from 2400 bps to 921 kbps.

By default, the PmodBLE is configured as a transparent UART device. UART data sent to the PmodBLE will be sent directly to the device it is connected to and vice versa.

Command mode can be entered by sending the module the characters “$$$” to which it will respond “CMD> ”. When in command mode, the module will respond to a large number of commands allowing the user to customizing the module for specific applications. In order to exit command mode, send “—<cr>” (three minus signs in a row followed by the carriage return character) to which the device will respond “END”. Remote configuration, or configuration over a Bluetooth connection, is possible using the command “!,1”. It is important to note that any of the “set” commands available for the Pmod BLE must be followed by a power cycle to take effect in any design.

The P1_6/STATUS pin directly reflects the connection status of the device. STATUS is driven low by the device when connected and is driven high otherwise. P1_6 can be reconfigured to several different functions using the SW command (see RN4970 User Guide).

Here is an example of using the PmodBLE to echo data via bluetooth.

The schematics of the Pmod BLE are available here. For more information on the device's UART interface and RST and GPIO pins, as well as commands and functionality refer to the RN487x User Manual and the RN487x Datasheet from Microchip.

If you have any questions or comments about the Pmod BLE, feel free to post them under the appropriate section (“Add-on Boards”) of the Digilent Forum.