In this design, you are going to be asked to do a VGA controller to display something on your monitor. Actually, a VGA controller is quite a simple design which only requires two counters and several comparators.

In this design challenge, you are asked to implement a circuit that generates VGA signals to draw a blue screen on your monitor in a resolution of 640×480. The following materials provide detailed descriptions of how VGA signals operate and some hints on how to design the VGA controller.

VGA stands for Video Graphics Array. Initially, it refers specifically to the display hardware first introduced with IBM® PS/2 computer in 1987. With the widespread adoption, it now usually refers to the analog computer display standards (defined by VESA®), the DE-15 Connector (commonly known as VGA connector), or the 640×480 resolution itself.

The analog computer display standards is specified, published, copyrighted and sold by the VESA organization (www.vesa.org). The timing information used in this project is an example of how a VGA monitor might be driven in a 640×480 resolution.

A DE-15 connector, commonly known as a VGA connector, is a three row 15-pin D-subminiature Connector (named after their D-shaped metal shield). The name of each pin is shown in Fig. 1 below. We will only concentrate on the 5 signals out of 15 pins in this project. These signals are Red, Grn, Blue, HS, and VS. Red, Grn, and Blue are three analog signals that specify the color of a point on the screen, while HS and VS provide a positional reference of where the point should be displayed on the screen. By properly driving these five signals according to the VGA timing specification, we can display everything we want on any monitors. To understand how these signals should be driven, we need to take a look at how our monitors actually work.

How do Our Monitors Work?

CRT-based VGA displays use amplitude-modulated moving electron beams (or cathode rays) to display information on a phosphor-coated screen. LCD displays use an array of switches that can impose a voltage across a small amount of liquid crystal, thereby changing light permittivity through the crystal on a pixel-by-pixel basis. Although the following description is limited to CRT displays, LCD displays have evolved to use the same signal timings as CRT displays (so the “signals” discussion below pertains to both CRTs and LCDs). Color CRT displays use three electron beams (one for red, one for blue, and one for green) to energize the phosphor that coats the inner side of the display end of a cathode ray tube (see Fig. 2 below).

Electron beams emanate from “electron guns” which are finely-pointed, heated cathodes placed in close proximity to a positively charged annular plate called a “grid.” The electrostatic force imposed by the grid pulls rays of energized electrons from the cathodes, and those rays are fed by the current that flows into the cathodes. These particle rays are initially accelerated towards the grid, but they soon fall under the influence of the much larger electrostatic force that results from the entire phosphor-coated display surface of the CRT being charged to 20kV (or more). The rays are focused to a fine beam as they pass through the center of the grids, and then they accelerate to impact on the phosphor-coated display surface. The phosphor surface glows brightly at the impact point, and it continues to glow for several hundred microseconds after the beam is removed. The larger the current fed into the cathode, the brighter the phosphor will glow. 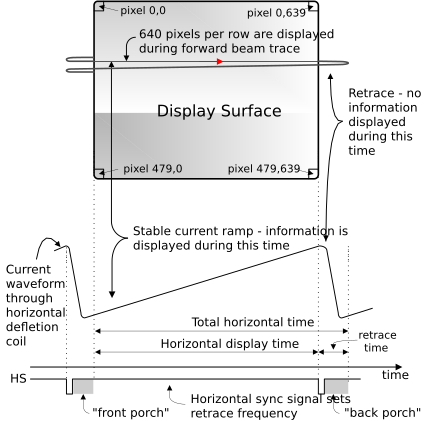 Modern VGA displays can accommodate different resolutions, and a VGA controller circuit dictates the resolution by producing timing signals to control the raster patterns. The controller must produce synchronizing pulses at 3.3V (or 5V) to set the frequency at which current flows through the deflection coils, and it must ensure that video data is applied to the electron guns at the correct time. Raster video displays define a number of “rows” that corresponds to the number of horizontal passes the cathode makes over the display area, and a number of “columns” that corresponds to an area on each row that is assigned to one “picture element”, or pixel. Typical displays use from 240 to 1200 rows and from 320 to 1600 columns. The overall size of a display and the number of rows and columns determines the size of each pixel.

Video data typically comes from a video refresh memory; with one or more bytes assigned to each pixel location (the Nexys4 uses 12-bits per pixel, Nexys 2, Nexys 3 and Basys2 uses 8-bits). The controller must index into video memory as the beams move across the display, and retrieve and apply video data to the display at precisely the time the electron beam is moving across a given pixel.

Figure 4 and the table below provide the timing specification for 640×480 resolution at 60Hz Frame Rate: 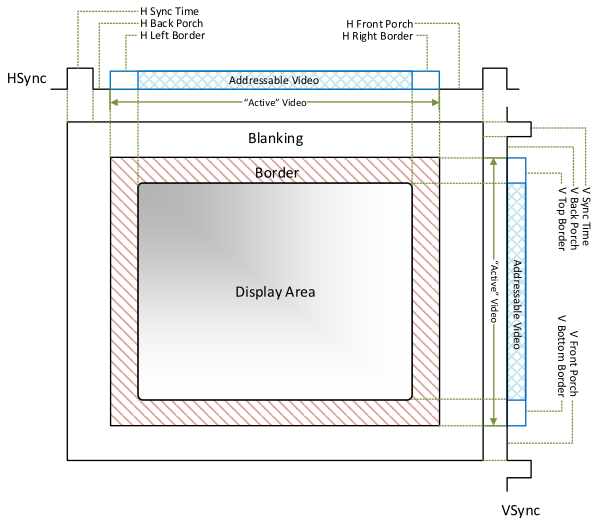 First of all, you need a clock divider to generate the pixel clock, which provides a timing reference to HS and VS signals. The pixel clock frequency is 25.175MHz in the specification. However, with ±0.5% accuracy, 25MHz can be acceptable as well. And obviously, 25MHz is easy to generate on your FPGA boards with the clock divider you implemented in previous projects.

The reference block diagram is provided in Fig. 6 below.