Using Resisters and Capacitors to Debounce

In the Debouncing via Software project, we learned how to debounce a button in a circuit with software. Other solutions to this problem also exist. In this project, we will examine how to debounce the button circuit using a resistor and capacitor to make an RC filter (resistive capacitive filter). The key component here is the capacitor, which is a device that stores energy using electrical charge. It is important to understand how a capacitor works before we begin, so there is more reading on capacitors available via the related material links. A capacitor works so well fro debouncing because it limits how quickly the voltage can change over a period of time. Essentiallym the capacitor quickly charges and discharges over every voltage spike, smoothing out the button bounce. Depending on how quickly the capacitor can charge, the button bounce should be mitigated.

To debounce the button circuit properly, we cannot use a capacitor alone; we must use a resistor as well. The combination of a resistor and capacitor in this circuit is referred to as an RC filter. RC filters can be used to filter out different frequencies of electrical variation. A properly designed RC filter could be be used to filter out specific sound frequencies (represented as electrical signals) being sent to a speaker. This, however, is a bit beyond the scope of our project. Instead, we are going to be focusing on the charge and discharge time of our RC circuit. We can control the rate at which the voltage changes by choosing our resistor and capacitor values properly to get a viable time constant. For this project, we will use a 10 KΩ resistor and a 10 µF capacitor. For more information regarding time constants and how the R and C values were determined from it, visit the link provided in the related materials section.

Having chosen our resistor and capacitor values, we can begin putting the circuit together. We will be using the same circuit we first used in Debouncing via Software. In that project, the button bounce caused “noise” that occasionally made the LED glow dimly instead of blinking. The addition of our RC filter remedies this problem. Refer to Fig. 1, which illustrates the individual steps for modifying the circuit. 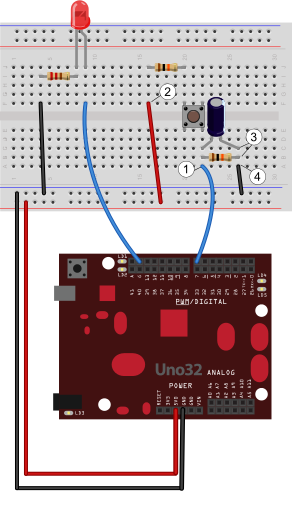 Testing the Debouncing Properties of the RC Filter

Now that we have built the circuit, you can test the debouncing properties of the RC filter. Plug the USB cable into your chipKIT board and program it with code from Debouncing via Software:

Once your board is programmed, the external LED should start blinking.

As you can see, the capacitor dramatically limits the rate at which voltage can change, especially compared to the size of the bounce noise. Considering the effect the RC filter has, our capacitor is definitely too big for handling button noise alone. This is not surprising. The RC values we chose were specifically meant to reduce bounce noise and any other noise caused by a tap/flick. The circuit was designed this way because it is easier to see the effects of the filter. A smaller capacitor could be used to target the bounce noise specifically.